A few months ago, after a several-year absence, I started watching the Late Show with David Letterman again. I’ve watched Dave since his earliest days on NBC over three decades ago. I stopped for a while because I wasn’t really enjoying him or the show anymore. He seemed bitter, cynical and bored.

If you felt the same way, try giving him another shot. He’s mellowed since becoming a father five years ago. He’s having fun again and it shows. The cynicism has been tempered and he’s almost - dare I say it? - warm.

Anyhow, the other night he had Nicole Kidman on. I’d always considered her a very pretty woman and a good actress who wasn’t bright enough to avoid marrying Tom Cruise. Well, she might still be a good actress but I don’t think she’s all that pretty anymore. And apparently her IQ hasn’t climbed any because it seems she’s joined the ranks of those Hollywood types who’ve done Something Wrong to their face. Her skin is too darn tight. She appears to be in the early stages of Joan Rivers-itis.

Dave of course, gentleman that he is, extolled her beauty several times and if you didn’t know him, you’d take him at his word. But as a longtime Dave watcher I can tell you with some degree of confidence that he was as taken aback as I was.

Although not as drastic yet (after all, she’s younger) Ms Kidman seems to have followed in the footsteps of Dolly (The Joker) Parton, Mary Tyler Moore and a host of others who have done appalling things to their facial features.

I Googled “nicole kidman plastic surgery” and got a bunch of hits. One of which led me to a site called awfulplasticsurgery.com.

That’s one scary site. Don’t go there. I mean, we all know about Michael Jackson but believe it or not - there’s worse.

And mostly these abominations are done in an attempt to preserve some vestige of youthful beauty. It’s bad enough when half the women in Hollywood have plastic cantaloupes attached to their chests but now a bunch of them also have swollen lips and drum-tight facial skin.

I blame Angelina Jolie. Seemingly, every other woman in the entertainment racket wants to be like her: huge pouty lips and a skinny frame except for chest melons.

But in a few years she’s going to start looking more “mature.” Will she go the botox/surgery/liposuction route, you think? I hope not but won’t be surprised if she does.

Add unethical plastic surgeons to the blame list. They exploit people with poor self-esteem and feed their insecurities. They betray their Hippocratic oath. They are doing harm.

Some of you know I’ve had a bit of thing for Susan Sarandon since 1970. It’s no big deal really. A few pictures on the walls. Pillow cases with her likeness. A couple of death threats to that Tim Robbins guy. A restraining order or two.

Anyhow, she’s a woman in the public eye who is aging gracefully and naturally. Susie (close, personal friends can call her that) has lines and wrinkles but still looks fabulous.

Remember Jessica Tandy? She was a lovely woman throughout her long life, no less so at 84 than she was at 24, 44, or 64. A hundred wrinkles couldn’t detract from her beauty.

I’ve got one more group of people to blame - fathers. A father’s job is to convince his daughter that she’s beautiful and will always remain so. Fathers need to take the Nicole Kidmans of the world aside and give them a shake. Make them face reality:

You were born beautiful. That’s a gift. So is a long, healthy life. But that life leaves marks. The ones that matter are those tracked upon your soul, not your face. Leave them be.

But I gotta confess I’m glad this father had sons. I bet Dave is too.
Posted by Frank Baron at 1:17 PM 23 comments:

I didn't take nearly as many photographs this year as in years past. Mostly because Hilary is at least as good a photographer and has a better camera. So I ceded a lot of that business to her. (You can see many of the delightful results at her blog.)

I did take a few though. Here's some of the ones I liked. (You can click on each photo to see them enlarged. Then hit your back button to return to the post.) 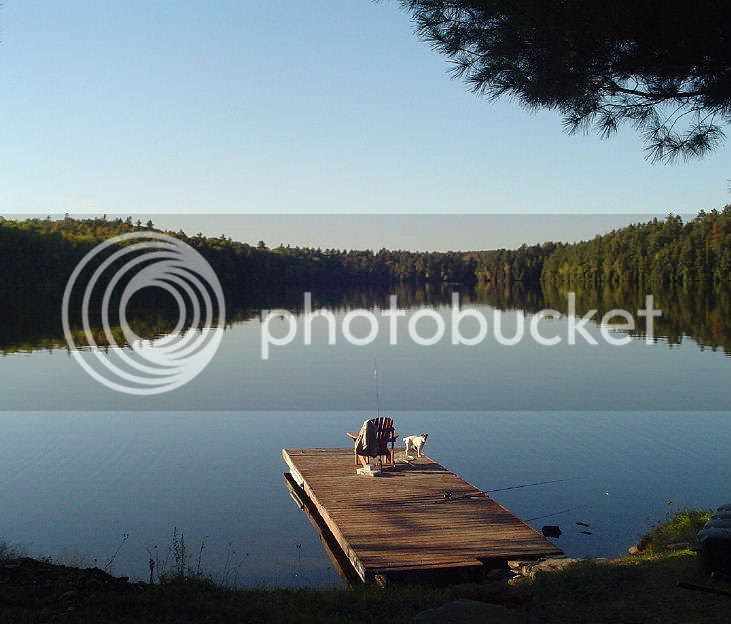 Benny waits on the dock for me to come play with those long fishing sticks again. 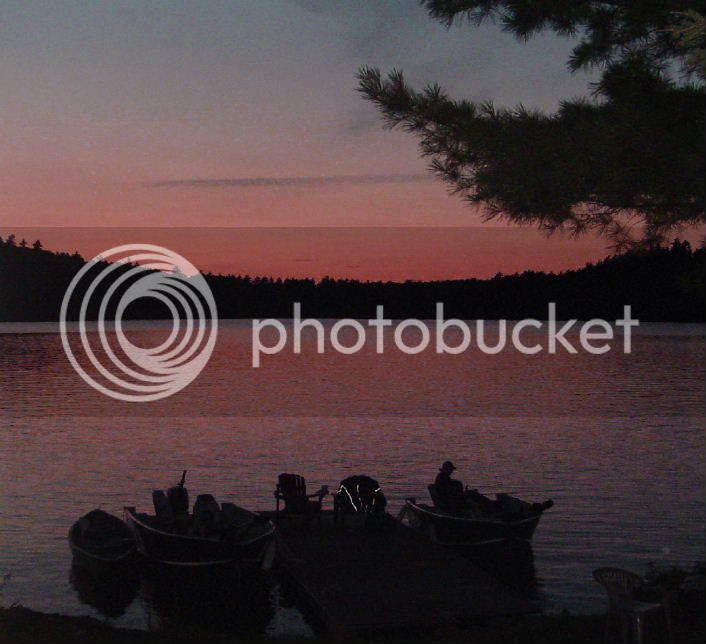 Nearly the same perspective on a different day. Son #1, sitting in the back of one of the boats, tries to keep sight of his float against the gathering gloom. 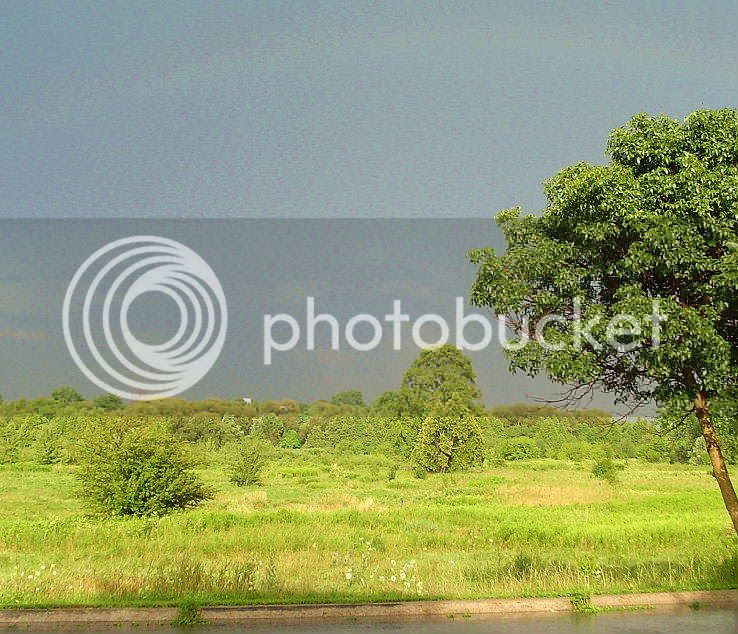 Back at home, the field and trees look freshly washed after a passing summer storm. 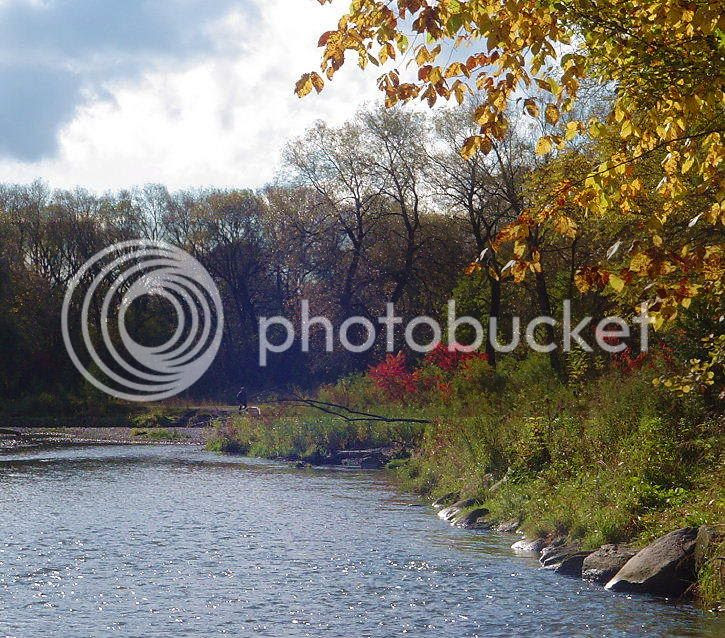 Autumn has settled in. The proud gold of still-robust leaves is dwindling into a resigned brown. But the sumacs' splashes of red defy winter's onset. 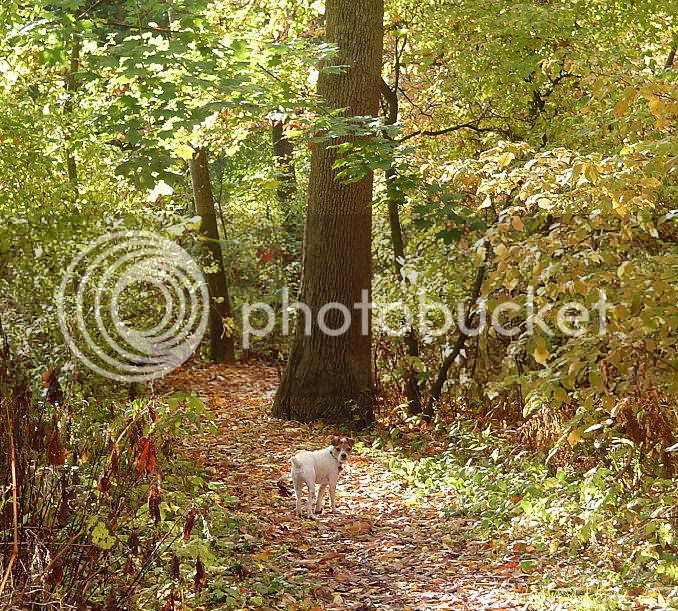 Ben checks on my whereabouts as we walk along a leaf-strewn path. 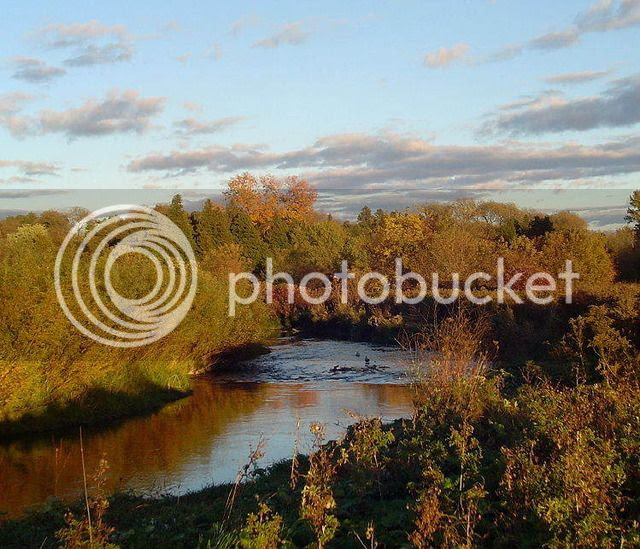 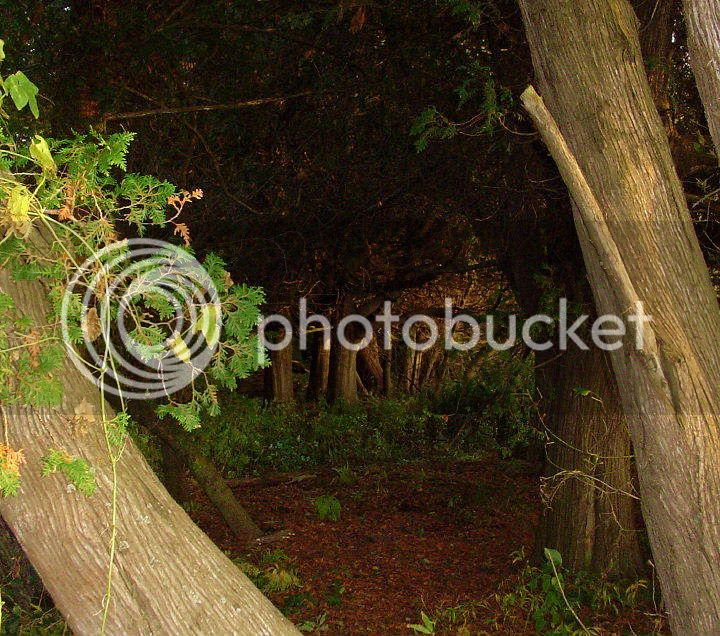 A peek inside the south cedar grove during that magical twilight time. 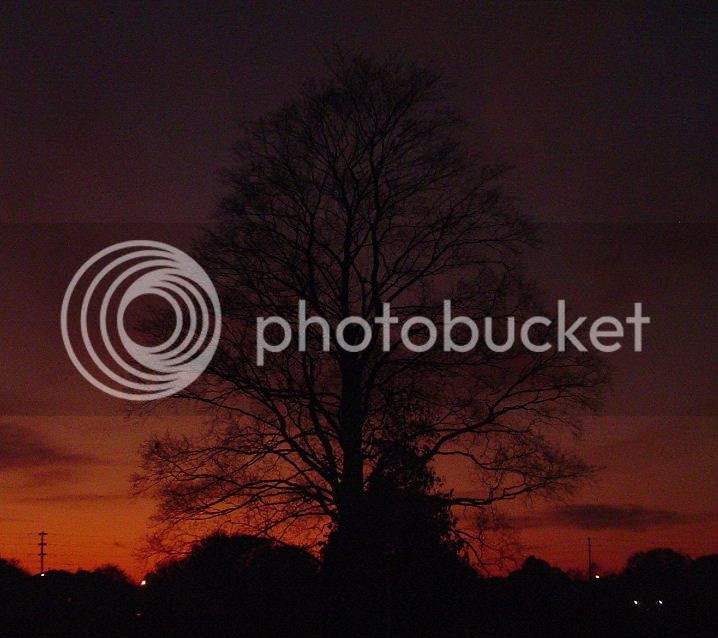 The field's tallest tree is lit from below by the sun's fading fire.
Posted by Frank Baron at 2:24 PM 23 comments:

I used to be a political junkie - an American political junkie - which, as a toque-wearing Canuck should’ve fostered at least a hint of shame but didn’t. I was young and idealistic in the late 60s and early 70s. Like most young folks, I leaned left politically. I was hoping for a McGovern miracle. Got Watergate. As one of my favourite writers* of the day would say: “And so it goes.”

In retrospect, that’s probably when the hazy veil of peace/love/dope began to part, revealing that scourge of young people everywhere and everywhen – reality. Ouch. Time to grow up. There isn’t always a happy ending. A smart person isn’t necessarily an ethical one. (That one stung.) Anyway, I grew up and as I did, I grew away from American politics. When the world didn’t end with Reagan’s election, I figured I could safely step back.

Flash forward a generation-plus. Barack Obama is facing off against John McCain. Black vs white. Ok. Make that tan vs florid. I don’t much care but Son #1 is captivated. Early on, he becomes a rabid Obama acolyte. He loudly, and often, berates me for my jaded indifference. He forgets, or doesn’t care, that I was around for Beatlemania and Trudeaumania. Barack Obamania is moderately interesting, but in a been-there, done-that kind of a way.

When Sarah Palin is announced as McCain’s running mate, I thought it a masterstroke. With Hillary’s reluctant, resentful release of her electoral reins, I thought Palin would appeal to disaffected Clintonites. Then I heard her speak and knew Obama’s coronation was assured.

Tonight was the election. I tuned in to the Comedy Channel’s broadcast at 10, being a Stephen Colbert fan. (I can tolerate Jon Stewart if I read the paper while he’s talking.)

By then, on account of Son #1 running downstairs every 1.3 minutes to announce CNN’s latest incantation, I knew which way the wind was blowing. Obama was going to be President elect of the United States of America. It was confirmed around 11 o’clock. Which is when I really begin to focus on what I am seeing on my television.

Then I see Obama and listen to him for the first time.

Oh yeah. This guy’s got It. He can move mountains with his voice alone. I envision a second, milk-chocolatey, American Camelot. Michelle projects intelligence, grace and power. Both of them, husband and wife, put me in mind of cats. They are lithe and sleek. They kiss and entwine fingers after his soaring acceptance speech and I read her lips saying “I love you” and I can almost hear them both purr. I realize I’ve been spellbound. Like a majority of Americans and idealistic people from around the world - I recognize the magic that is his. That is theirs.

He can certainly move a crowd. He projects and instills an evangelical fervor. The camera is forever zooming in on tear-stained, chanting faces. Just like the ones I remember from those Beatles’ concerts and those Trudeau appearances.

Obama stops speaking and the next several minutes are filled with a slow procession of running mates and extended family onto the stage. Hugs and kisses abound. Black embraces white and vice versa and the symbolism fairly shouts. I become aware of the music and focus, for the first time, on the production aspects of what I’m experiencing.

I’m particularly struck by the music. It is a seemingly endless series of crescendos - rising and swelling in majestic waves - buoying the emotions of the crowd.

It is powerful. I realize this is a man who has mastered media. Or his handlers have. Doesn’t matter really. He is a force.

I’m a lucky guy. I live in interesting times.

And I think American politics have become intriguing again.
###
*Kurt Vonnegut. But you knew that.
Posted by Frank Baron at 1:37 AM 35 comments: