A couple of weeks ago while out walking, I found something. I wasn’t on one of my walks-for-health. Walks-for-health require a certain rhythm and you’re supposed to keep going even if something interesting catches your eye.

It was more of an amble. When ambling, you’re allowed to look around and even stop and sit on a bench or a hill if you want. Ambling is exercise for the spirit.

I was looking down when I saw something that didn’t belong among the path’s usual detritus of dirt, grass, weeds and sticks. It was small, round and bluish. I picked it up and brushed off some dirt.

It was, or used to be, a button made of some very lightweight metal alloy or maybe metallic-ish plastic. (What do I know from materials? I’m not a geologist. Or haberdasher.) You could tell it was a button even though the thingy at the back, through which the thread was supposed to be looped, was eroded away to a pair of wee bumps.

It was the obverse that caught my attention though. On it was a face, faded but recognizable, and vaguely familiar.

My first thought was Jane Jetson of the 60s cartoon family. My ambling partner, Hilary, thought maybe it was supposed to represent Barbie, the famous doll. It definitely has a 60s-type look. Hilary took a picture of it and I decided to pose the question to you folks.

I know the young pups among you are saying “what-everrrr” and have already changed the channel but maybe a few of you fellow boomers can spare a guess.

Upon further, and prolonged reflection, I am now leaning towards Judy Jetson, the daughter from that show. 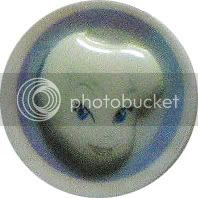 PS- I’m taking some time off starting this weekend so please forgive any delayed responses to emails or comments. I’ll be back in a couple of weeks.
Posted by Frank Baron at 11:05 AM 33 comments:

An Aid For The Disorganizationally Proficient (Issue #144)

I’ve written before about my disorganizational skills. (Always try to put a positive spin on things!) Many of you will recall the results of a personality test I took in university wherein my organizational ability was deemed to rank in the 4th percentile. This meant 96% of the population was epter than I at that sort of thing. The professor administering the study said it was the lowest mark he’d seen. Of course at that time, the early 70s, he’d only seen a few thousand.

My main compensatory mechanism over the decades has been writing myself notes. Naturally, for the disorganizationally-adept, the drawback to this was keeping track of them. One notebook certainly wasn’t sufficient because it could be misplaced so easily. So I bought a backup. And a backup to the backup. And so on, until my desk could not handle the overflow and I had notebooks on my night stand, bathroom and kitchen counters, car, and jammed between the cushion and the armrest of my Comfy Chair.

Undoubtedly, those 96 percenters would have notebooks for specific things: one for phone numbers and addresses: another for writing ideas: a third for scheduling-type stuff and another for video game codes and tips. Probably they’d remember where they put each and every one of them too. I try not to hate those people. It can take me an hour and hundreds of flipped pages in multiple notebooks before I can find somebody’s phone number.

Ditto for writing ideas. Usually I’d just jot down a few keywords to get me kickstarted when I had the time and energy to write. So, scattered amongst the phone numbers and directions and reminders to fetch my kids from somewhere were phrases like “women - haha!” and “fishing = sacrament.”

It was difficult to get any writing done because while searching through the books for a half-remembered topic any number of distractions could, and usually would, get me sidetracked.

Well, technology, in the form of Mother Google’s homepage add-ons (one day Google will try to eat Microsoft, or vice versa, and the whole world will choke to death) has arrived to save the day.

What’s ironic is that this hi-tech idea which has already saved me countless hours of page-flipping is based on such a low-tech invention.

It’s a virtual yellow sticky note. And it’s way better than the originals because it doesn’t curl up and drift away like an autumn-tossed leaf that then disappears amongst desk debris. It’s in the middle of my homepage and I can add notes any time I please. I can also delete them when they’re no longer relevant. When I first got it, I just typed random things and deleted them because it was fun.

My only concern is regarding its storage capacity. Since it remains on my monitor screen I suspect there’s a finite number of things I can add before the thing gets filled up. I’ve only been using it for a couple of weeks now and it’s filled a goodly portion of my screen. I’m definitely adding things faster than I am deleting them.

You know how you always think of the smarty-pants response to some argument 10 minutes to 10 years after you lost the argument? We hate when that happens....

It was early on a lovely summer evening and I wanted to sit outside and enjoy a refreshing beverage. I constructed said beverage and prepared to sally forth.

“You can’t go out there like that,” I was told.

“You’re wearing pajamas. People will see you. People I know. I will lose face and have to leave town and I don’t want to.”

I have only recently discovered the joy that pajamas can bring. I am speaking specifically of pajama bottoms here, not tops. Tops are goofy and only old men wear them. I am hardly, at 56, old. 56 is the new 44 and, if I recall correctly, 44 is the new 35. You’d have to be insane, or a teen, to think that 35 was old.

For most of my life I have worn jeans - winter, spring, summer or fall. In summer, they can be a smidge uncomfy on hot days. I am not allowed to wear shorts because my legs are white and spindly. The sun’s glare rebounds off them and blinds passers-by. I have nightmares about drivers involved in a chain of fender benders, clapping one hand over their eyes and pointing an accusing finger with the other.

A year or so ago, Son #2 started wearing pajama bottoms pretty much everywhere. I shrugged. Kids. Heck, I once wore barrel-sized bell bottoms and a Nehru jacket. Not together though. Pretty sure.

Anyway, when I took him shopping one day for more, I decided to pick up a pair or two for myself. I was pleasantly surprised to see that they cost less than $15. In fact, I have since purchased some very spiffy ones, in designer plaids, stripes and checks, for less than 10 bucks!

They are light and comfy. They have elastic waists which come in very handy when dinnertime rolls around. And get this:

They have pockets now! I’m fairly certain that way back in the 50s and early 60s, when I last wore them, they were pocket-less.

So, on the one hand, we have comfort, stylish designer plaids, stripes and checks and pockets. And on the other, we have someone sniffing with disapproval.

Well, the sniffing won that day.

But only because I forgot about Hugh Hefner.

Hef practically spent his entire life in pajamas! For all I know he still does. And he’s a millionaire and his magazine has articles in it about stylishness! Probably.

How can wearing jammies be a fashion faux pas if Hef wears them? I chuckled to myself, anticipating the next PJ discussion and my new trump card.

As I thought about Hefner, I came to realize that we had lots more in common than sartorial resplendency:

He drinks Pepsi and I drink Pepsi sometimes.

He has a magazine empire and I have written stuff for magazines.

He has slept with hundreds, maybe thousands of women. I have kissed more than a dozen. (If we count aunts.)

In fact, it would not surprise me one iota if ole Hef put some fishies in one of his swimming pools and wet a line now and then.

A week or so ago, sporting a new, classy, grey/white/yellow-striped pair with a button-fly front, I headed outside.

“Hugh Hefner wears them all the time!” I crowed triumphantly.

Any day now, I’m gonna come up with a smarty-pants rejoinder to that one.
Posted by Frank Baron at 11:56 AM 21 comments: