I've been away at the family cottage for the last few days and, after a whirlwind few hours back home, I'll be returning there tomorrow.

I'm not sure when exactly, I'll be writing the next "proper" post. Summer seems to be kinda hectic these days -- but in a good way.

In the meantime, I'm going to post a couple of YouTube videos I particularly enjoy. I hope you will too.

One of my favourite musical genres of the 60s and 70s was Southern Rock -- the kind of sound popularized by the Allman Brothers, Lynyrd Skynyd, The Band and Little Feat. Probably my favourite practitioners of that kind of rock was a band called Wet Willie. It was fronted by a guy named Jimmy Hall. Jimmy's got a great set of pipes and can blow a sax the way you just know a sax likes to be blown.

(Let's get all the wet willie and great sax jokes out of the way right now, shall we?)

As far as I knew, the band stopped recording in the mid-late 70s. I didn't know that Jimmy, and at least some of the original band, was still playing as recently as a few years ago. Now, thanks to the wonder of the Interweb and YouTube, I do. And I was thrilled to see, that at least in 2002, they could still kick musical derriere.

In the following clip, Jimmy and the boys, aided by his sister, Dee, let rip a terrific version of one of my favourite tunes of theirs, Street Corner Serenade. That they appear to be playing in front of about 17 people doesn't seem to faze anybody, especially Jimmy.

Turn up your speakers and enjoy.


My other favourite band of the 70s was the aforementioned Little Feat. Fronted by the incomparable, and too-soon-gone, Lowell George, the band combined boogie with country and bluegrass and blues to form a wonderful sound.

One of their simplest tunes, a ballad espousing the lonely life of a trucker, became one of their few hits. Like Wet Willie, Little Feat didn't get the airplay I think they deserved. The clip I'm featuring next is a song that my friends and I used to play and sing on the porch on summer evenings -- fueled by a little weed and a little wine. It's called Willin'. The video isn't great but the sound isn't too bad.

Crank those speakers, kids. I hope you enjoy.

No, this is not going to be yet-another of those sordid tales of the misdeeds of men in Catholic robes. Rather, it's a story, told in photos, of dedicated parenting.

Of all the visitors to either my, or Hilary's bird feeders, none are as wary and watchful as the male cardinal. He often forgoes eating his own meal, preferring instead to stand guard nearby while his mate dines. When she's done and has flown back to the safety of nearby bushes, he may grab a few hurried nibbles before joining her.

While at Hilary's a couple of weeks ago, I had the pleasure of watching a Dad Cardinal introduce his fledgling daughter to the joys of the feeder. (Many of the photos aren't especially crisp because they were taken through a glass door. Click each if you wish to see a larger version.) 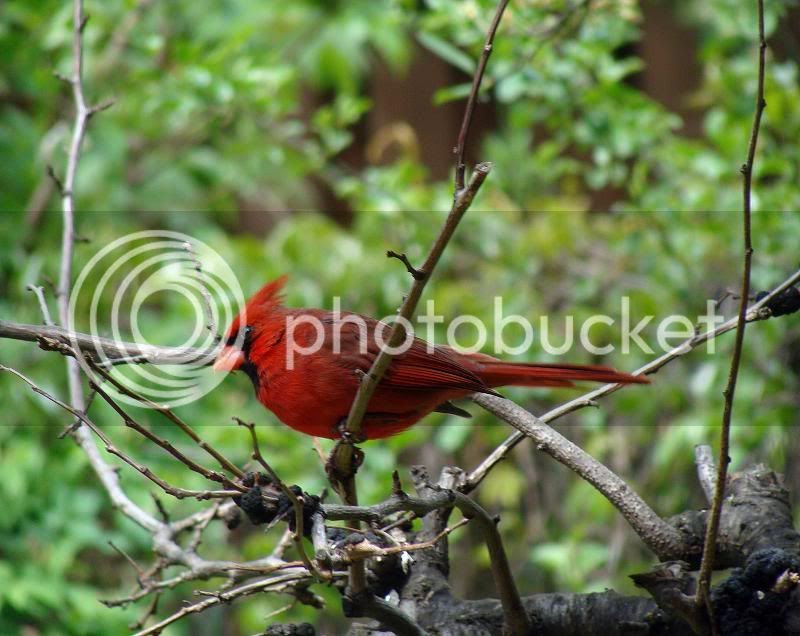 As usual, he first cases the joint from the nearby plum tree. 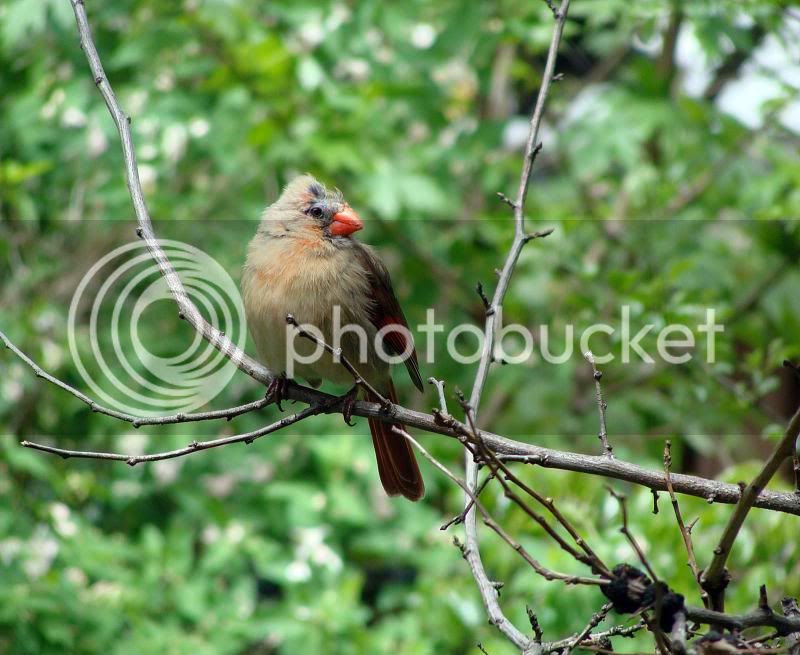 Daughter waits dutifully on a nearby branch. She's hoping for a bill-to-bill feeding. She's cute, in that endearing, gawky, pre-teen kind of a way. 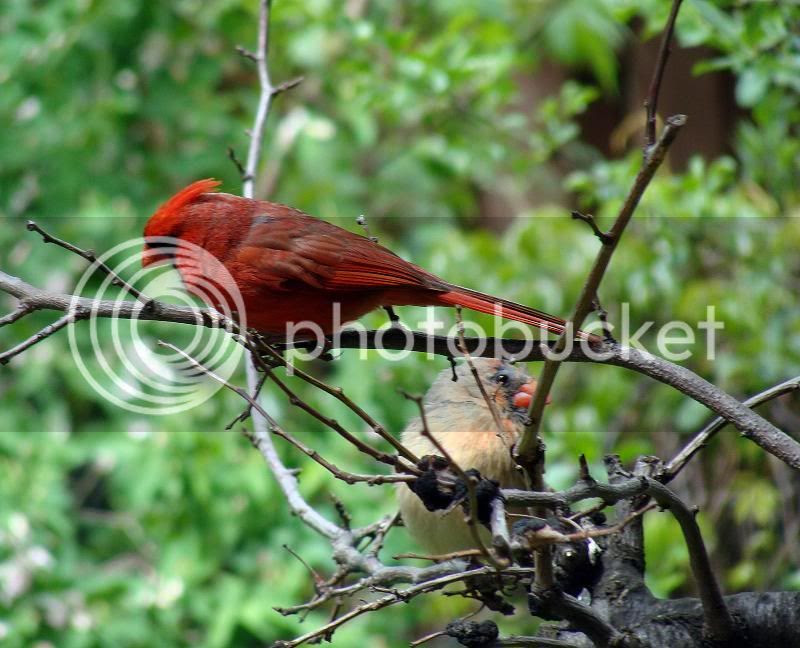 Maybe Dad will get the hint if she flits over to sit near him. 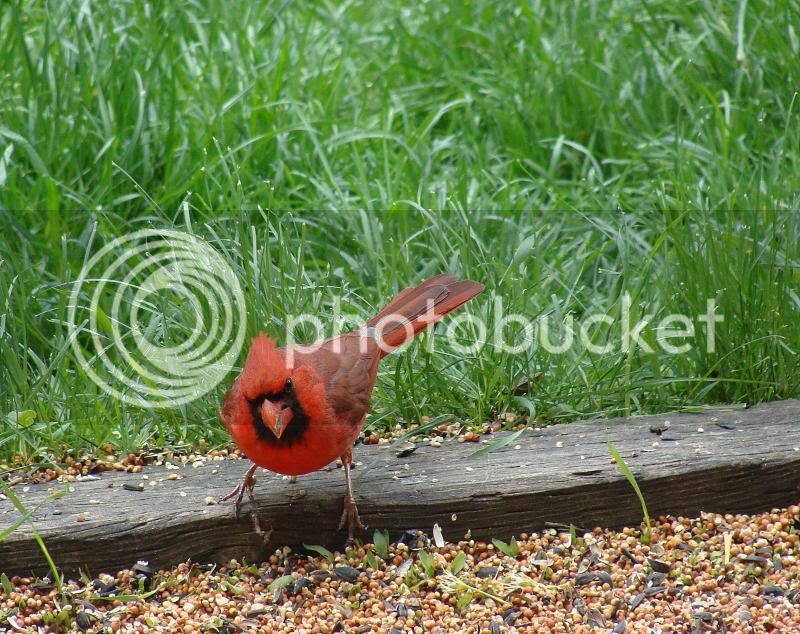 Well, that didn't work. He flew down to the ground near where all that stuff is. Hmm, he seems to be eating.... 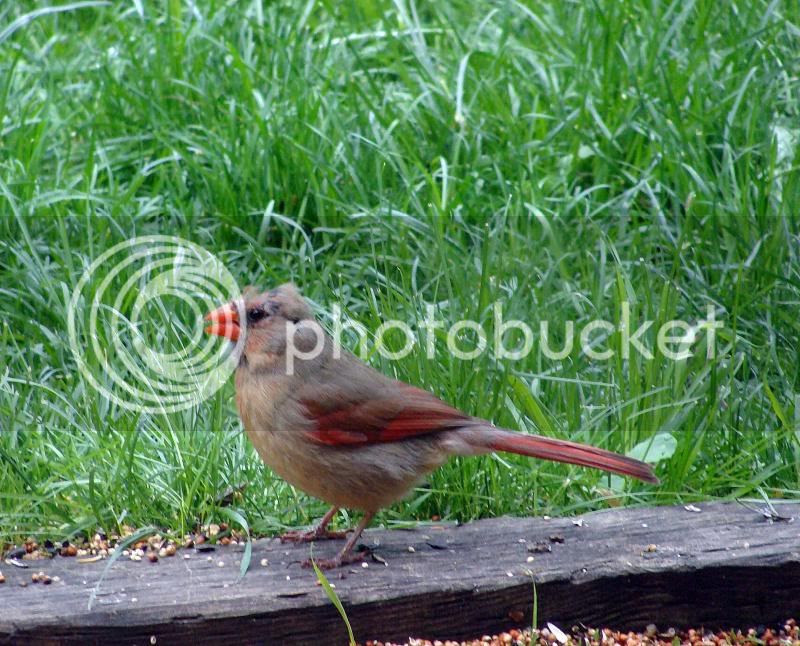 Okay! Here I am Dad! Feed me, like in the good ole days, whaddaya say? Wait, where you going? 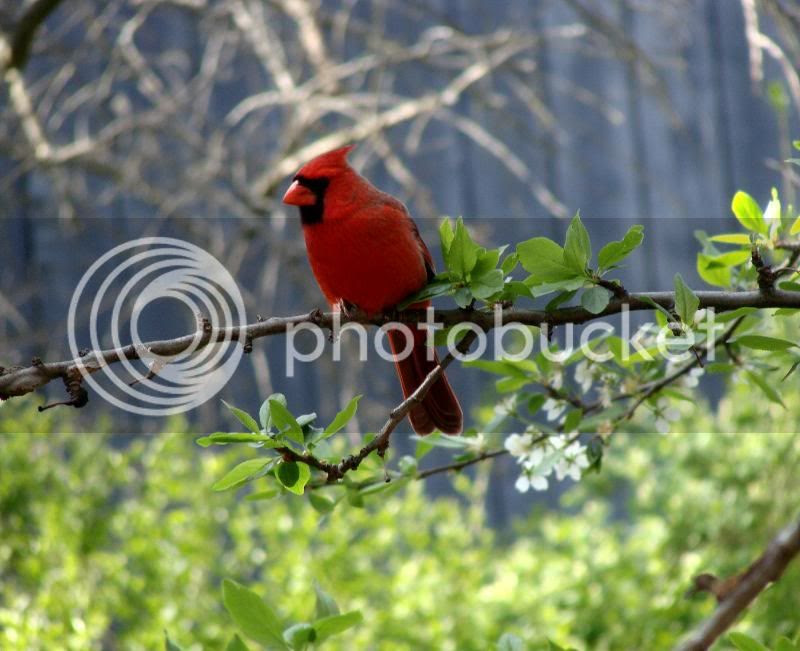 Dad's gone back upstairs to stand guard. He has faith that his little girl is as clever as she is cute. She'll figure it out. 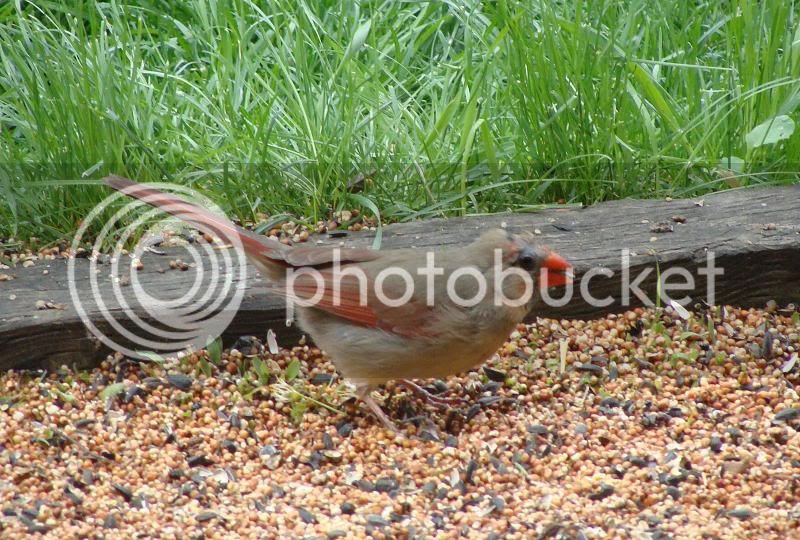 Hey! Dad was right! This ain't so hard!

Our feeders play host to several other critters, mostly of the feathered variety. Here are a few: 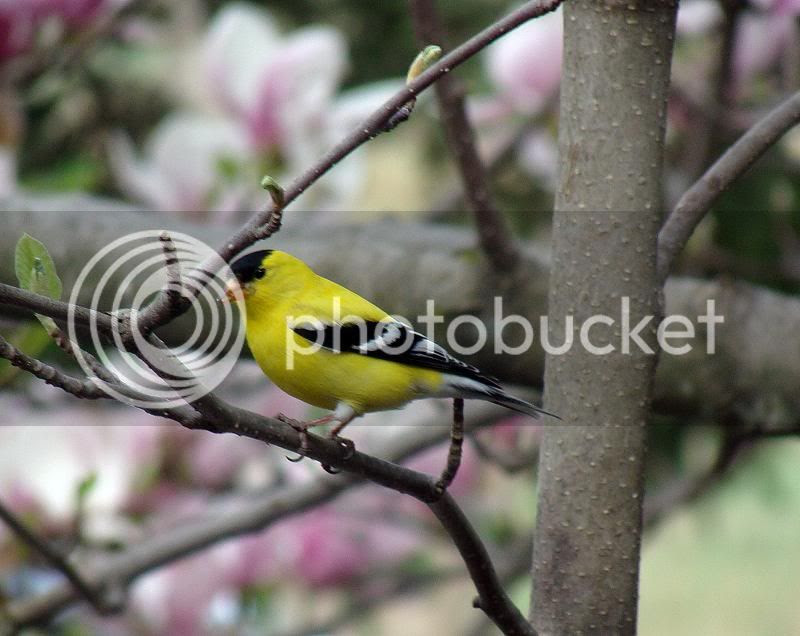 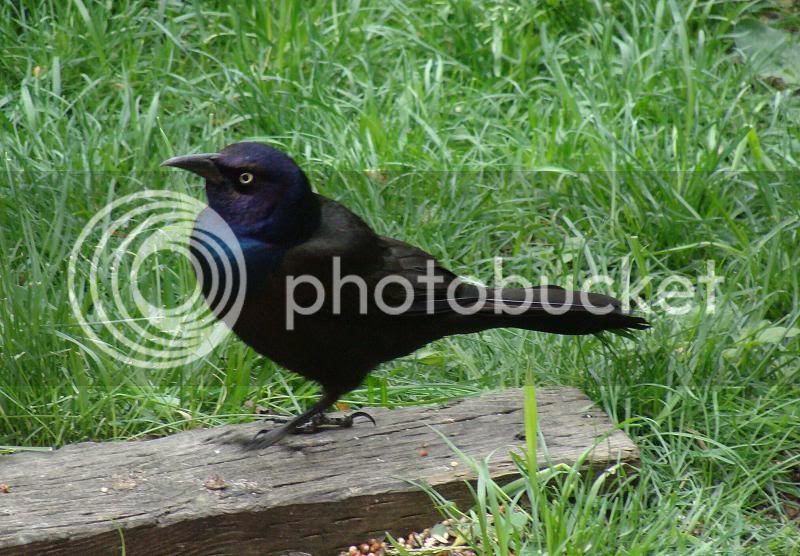 For some reason, when I saw this photo, I could easily imagine this grackle "Harummph-ing" self-importantly. 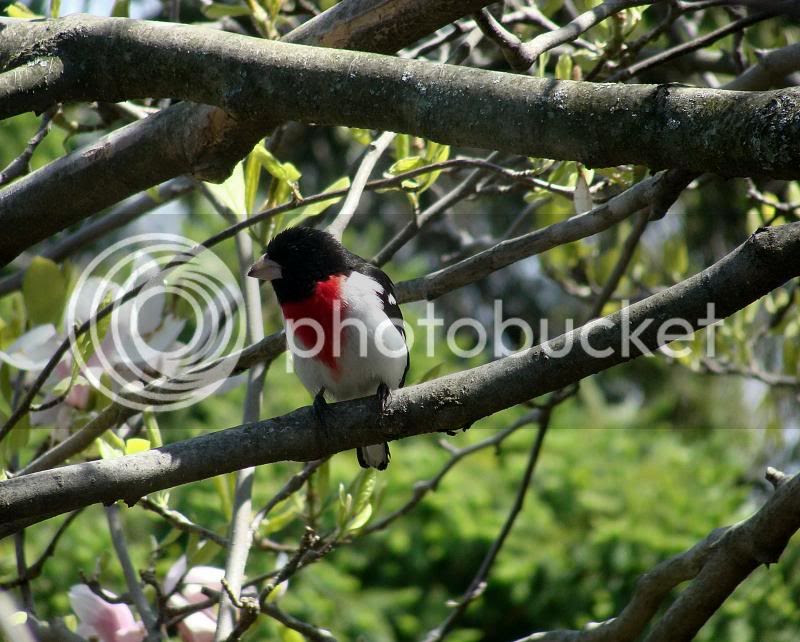 I was very pleased to be able to snap a photo of this infrequent guest, a Rose-Breasted Grosbeak. I hope I get another chance to get a better shot. It was a treat just to see him, though. 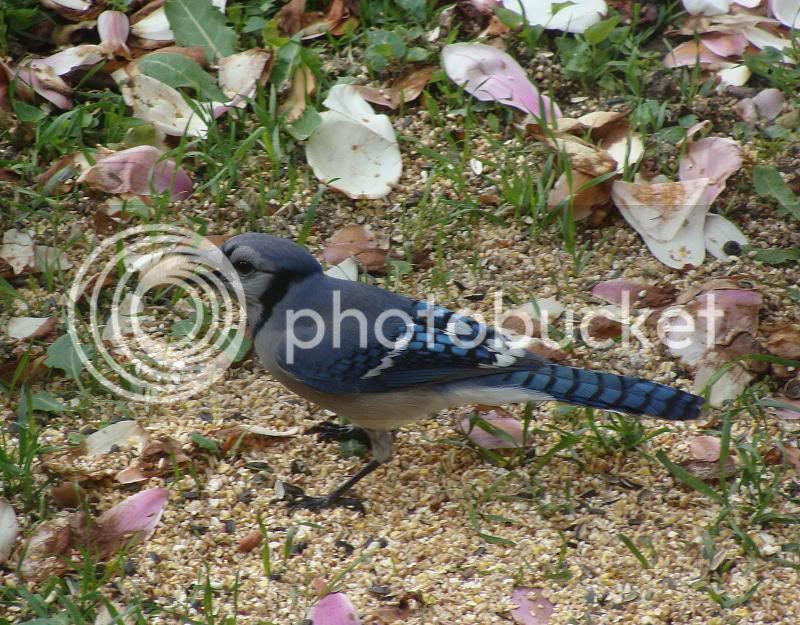 I usually scatter a few peanuts below the feeder each morning. Then it becomes a race between the blue jays, grackles and squirrels to see who makes off with the bounty. As often as not, it's the ever-alert jays. This fellow had no problem finding his prize among the fallen seeds and magnolia blossoms. 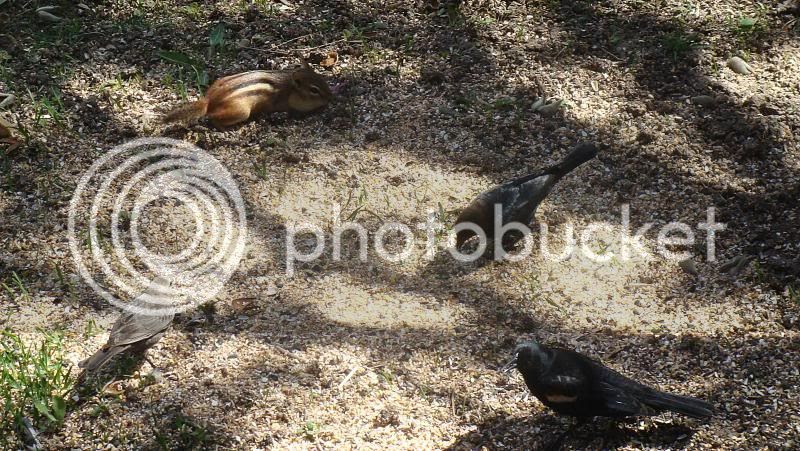 And we'll close this offering with an example of the disparate group one might find enjoying scattered birdseed. Clockwise from the top, we have a chipmunk, a male brown-headed cowbird, a redwing blackbird and a female cowbird.

Hope you enjoyed the show.
Posted by Frank Baron at 2:19 PM 21 comments: