Another Excerpt From: Walking With Benny (#219)

Watched a grackle in the backyard gathering nesting material just a few moments ago. He’d hop along (you’ll understand how I came to be certain of his gender in a moment) gathering bits of dried stalks of grass or weeds. When he had two or three bits in his beak, he’d open it again to gather more and drop the ones he had - thereby having to start over. I watched him do this several times.

Now you know how I knew.

It was easy to picture Mrs. Grackle tapping her foot and pointing to her watch when he finally appeared at the nest-to-be with something to contribute.

At the same time, about 10' from the grackle and deeper into the shade of the SW corner of the yard, I watched a cowbird engaged in what I first thought was the same behaviour as the grackle. It was walking slowly but purposefully, pecking over here and then over there. After a handful of pecks with no visible result, I figured he was looking for food, not nesting material.

And now, as I write this a few minutes later, I recall that cowbirds always lay their eggs in the nests of other birds. Duh. They’re never concerned about finding nesting material.


###
Spawning is just about done. The trout population is sparse now, and scattered. But the warm, dry spell has lowered and cleared the water, so the ones which remain are easier to spot.

Some people, even with sunglasses, sometimes seem totally unable to see these torpedo-shaped shadows. Unless I’m fishing, I never wear sunglasses while walking, and still, I have no problems spotting fish. I suppose decades of squinting at water gives me something of an edge.

Bumped into, and chatted with a couple of folks along the way this morning. Both expressed disappointment at missing the peak of the trout run when the fish were jumping at the dam. One woman in particular, said she hadn’t seen a “single fish” in the last 10 days.

As we spoke, without even turning my head much, I could see a pair of rainbow trout tucked behind a boulder not 20 feet away. Along this particular half-kilometre stretch of creek, I could probably see two to eight fish every hundred metres, if I was looking for them. Two weeks ago was three times that number, last week, twice.

She hadn’t seen a single one.

I think there’s a lot of folks like her. Folks who can't seem to see, even when they’re purportedly looking.

First of all, most of them aren’t really looking at all. If not actually accompanied by someone and chatting, or strolling with their iPod cranked up, they’re busy inside their heads thinking clamorous  thoughts about work or the children or finances or sex or medical problems.

Their inner noise and busyness, in effect, deadens their senses. They see well enough not to bump into trees but they don’t see the squirrels or birds among the branches. They see the water splashing over the rocks but they don’t hear the music of the creek.

And at least some of them aren’t seeing fish that are finning in plain sight.
Posted by Frank Baron at 3:26 PM 22 comments:

I've collected something of a mishmash of photos over the last few months which I'd like to inflict share with you good folks. As a bonus, I'm offering a video of leaping rainbow trout! All for the incredibly low (albeit regular) price of free!

The photo below will probably become my new header picture. It's taken from virtually the same place, but in winter rather than fall. Maybe I should put it to a vote. Keep the old one or replace it with this one? (Or maybe I should have just switched to see if anyone would notice?)

Remember, if you wish, you can click each photo to see a larger version. 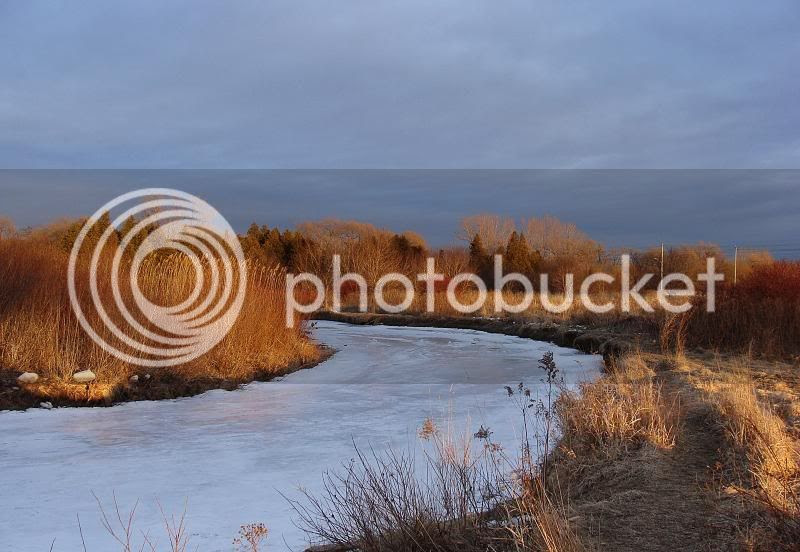 Last fall, in the middle of the annual salmon run, I took the following pic. You can see the shadows of the big fish in the creek behind an oblivious Benny. 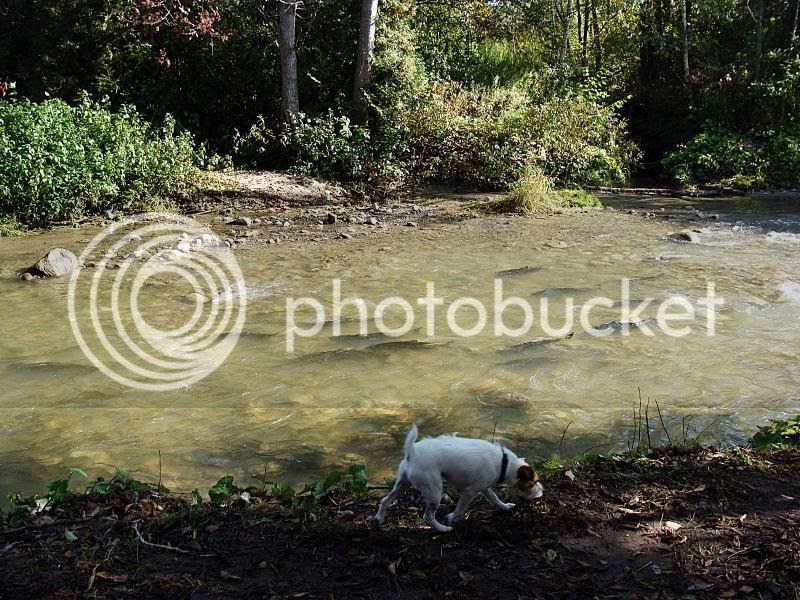 The trio of ducks below, appeared to me to be lost in thought. Perhaps in the same one: "Who's that lumbering dude pointing that thing at us? 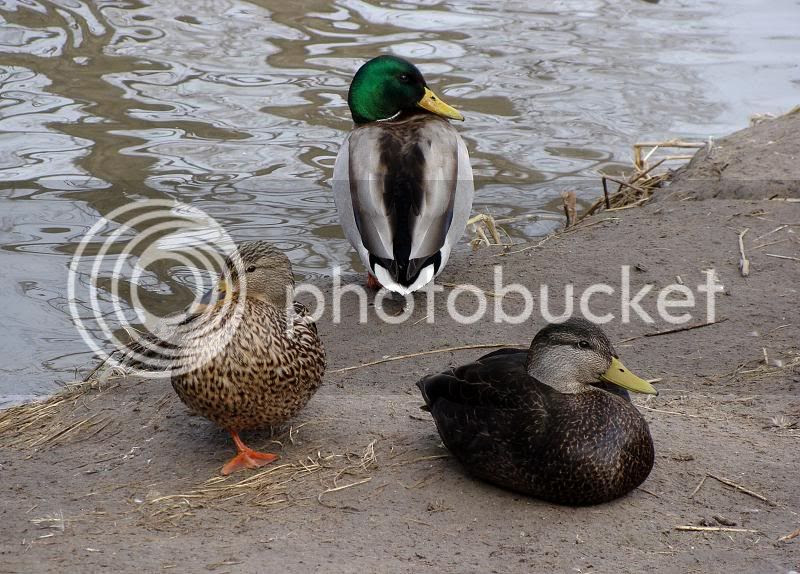 This next one goes back to last New Year's Eve. It's a snapshot of part of the table at hosts' Debbie and Mario's place. I swear by my Big Baba's apron that the view changed every three minutes as more (and more and more) food and drinks appeared and disappeared. But every view was just as festive and colourful as the one below. 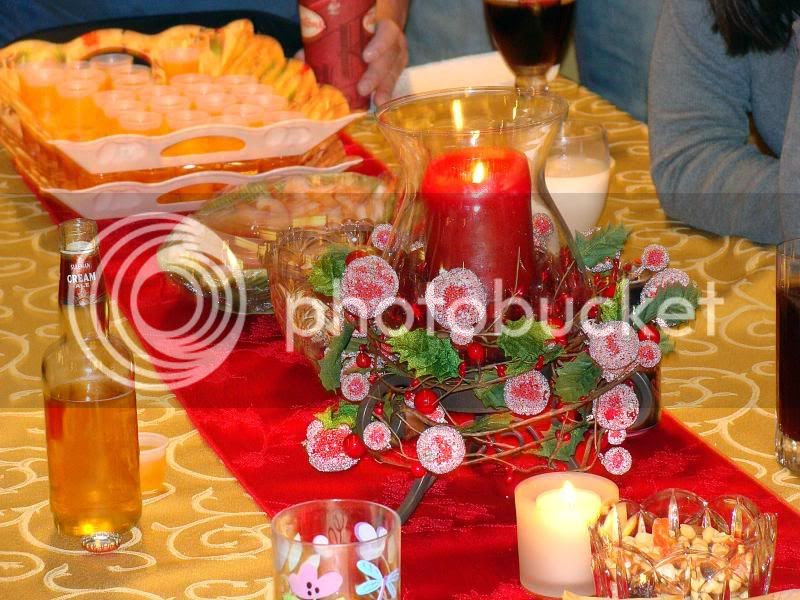 A few weeks later, Hilary decided to buy a bouquet of flowers to beat back the winter gloom. They made a striking display on her dining room table. (She just up and bought them. Honest. I'm pretty sure I didn't miss a hint....) 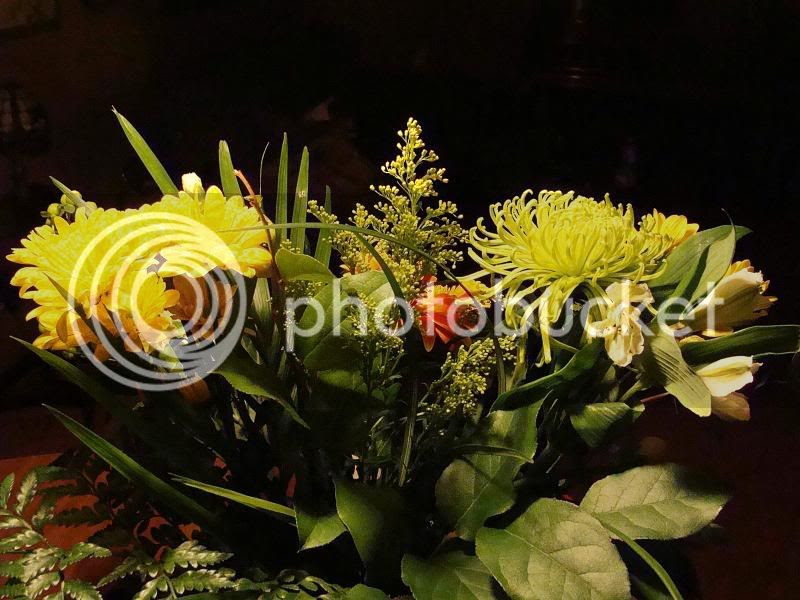 Here's a closer look at one of the blooms on the other side of the bouquet. 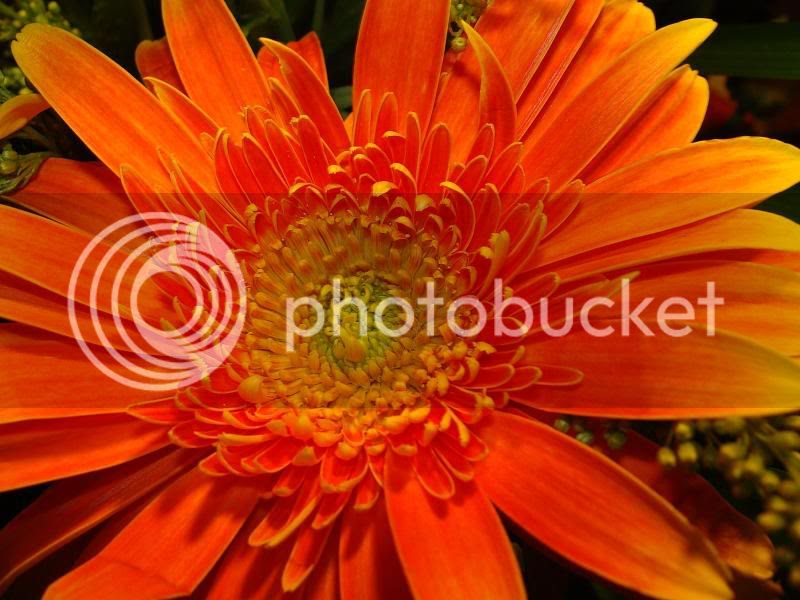 I wish I could have gotten a better pic of the next subject. He was a rare visitor to the little pond near my home which hosts a large flock of mallards. He's a Northern Pintail duck. What's particularly striking about them is the configuration of their feathers (which of course, explains their name). 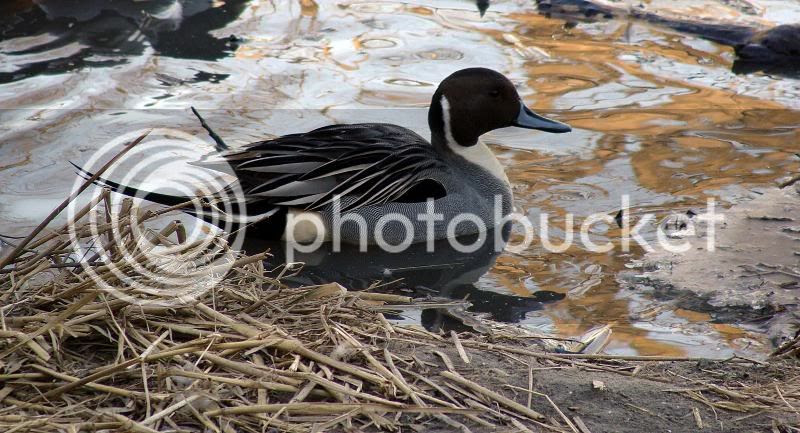 At Hilary's last weekend, I borrowed her camera to take a few pics of birds at her feeder. Shooting through the patio door glass obviously flattens out the picture - but the subtle iridescence of the grackle's colouring still comes through. 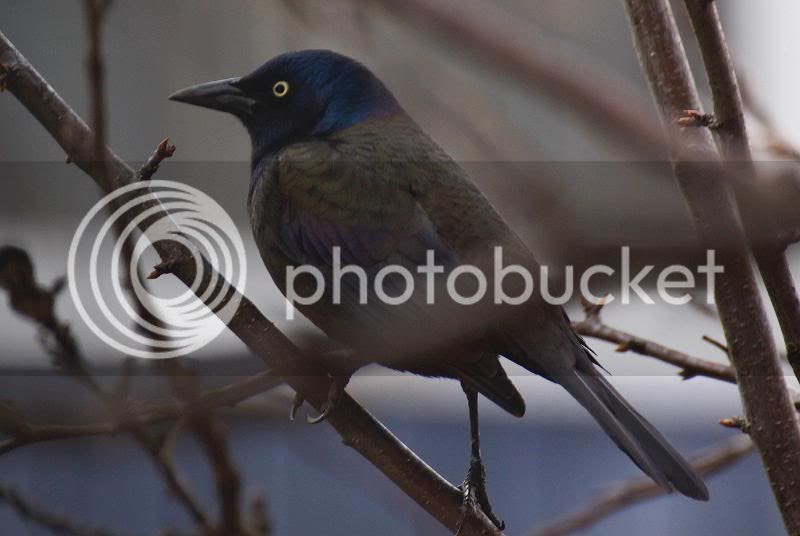 For several weeks, birds were avoiding both my and Hilary's feeders. I eventually became convinced we had an unappealing batch of seed. Changing the seed helped coax the birds back. But undoubtedly, the presence of the little fellow in my next photograph deterred the locals as well. The merlin perched nonchalantly in my magnolia tree, about 10 feet from the bird feeder, undoubtedly awaiting the arrival of his own feathered lunch. After admiring him a while and taking the shot (again, unfortunately, through glass) - I went outside and shooed him away. 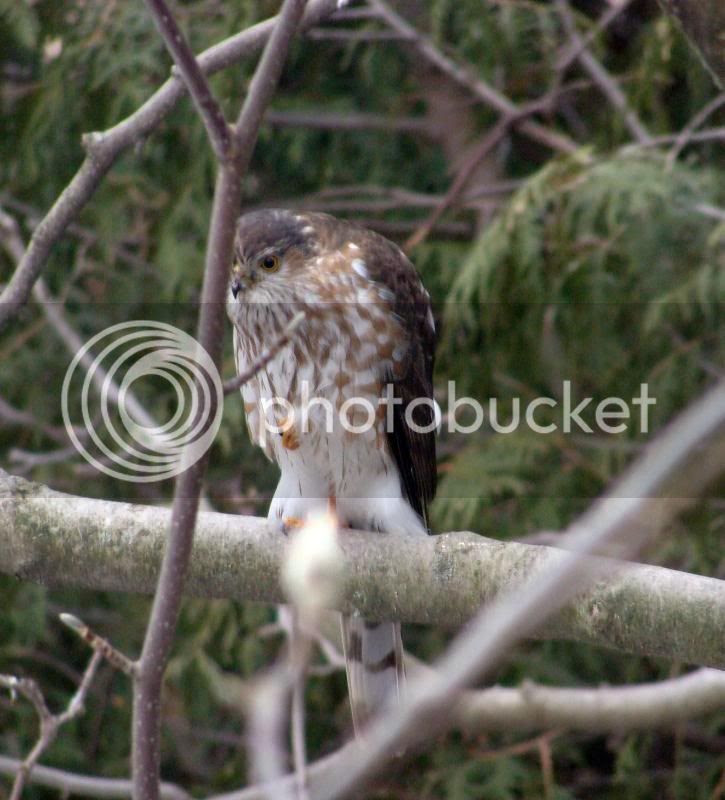 Well, it seems I still have a few pics but this post has gone on long enough. I'll save them for another time. As threatened promised, the video below was taken about a week ago, a few minutes' walk from my house. The rainbow trout (steelhead) were anxious to get upstream to get some serious, fin-to-fin canoodling done. Part-way through the video, if your sounds are on, you'll hear an excited little boy announce each airborne fish he spots.