We’re rolling out those lazy, hazy, crazy days of summer here in the Great White North. I don’t do real well with heat. Which means I’ve been even less ambitious than usual. So, I’ll tidy a few loose ends and post some pics in lieu of actually having to think about something.

###
Some of you may recall my epic battle with Bell Canada. If not, and you would like to read the blow-by-blow accounts of my heroic struggle, you can find them here and here.

Well, I’m happy to report that since those words hit the Interweb, I have not received a single dunning letter. They’ve stopped. And no cop-voiced guys have called, telling scary stories about what happens to deadbeats when the Bad Credit Monster is unleashed.

I suppose it could be a coincidence. But I suspect Someone In Authority read the stories and decided to remove me from the list.

See? There is a God.

###
I saw the young crow once more, two mornings after I wrote about him. Since then, nada. There has been no gathering of crows in that area. Nor have I seen a youngster hanging around. Pretty sure it’s safe to assume he’s flitting about with his friends and family, cawing his fool head off. I feel pretty good when I think about that.

###
Some of the photos which follow should have accompanied the previous column/post. I took them the same day. However, due to that lack of ambition thing referred to in my opener, I didn’t get around to uploading them to my computer until now. My bad. 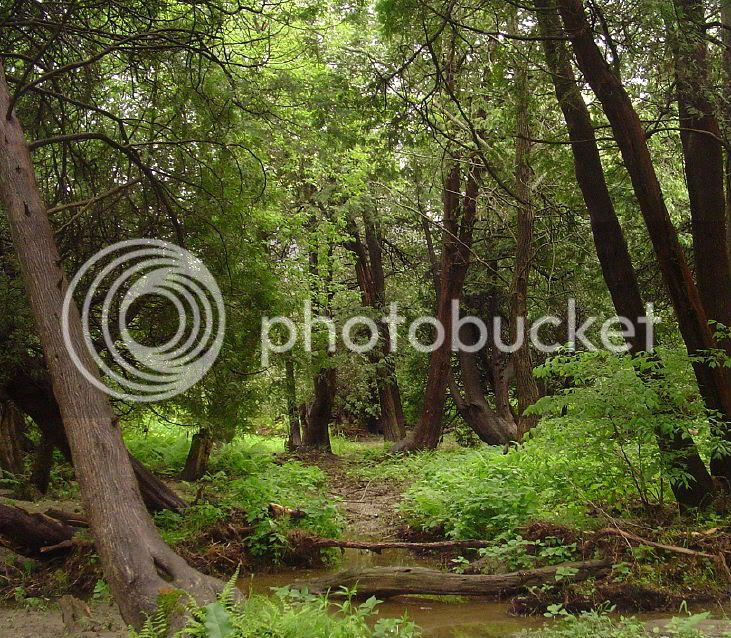 The above pic is a peek into what I call the North Cedar Grove after a couple days of rain. Ben and I walk through it most mornings. 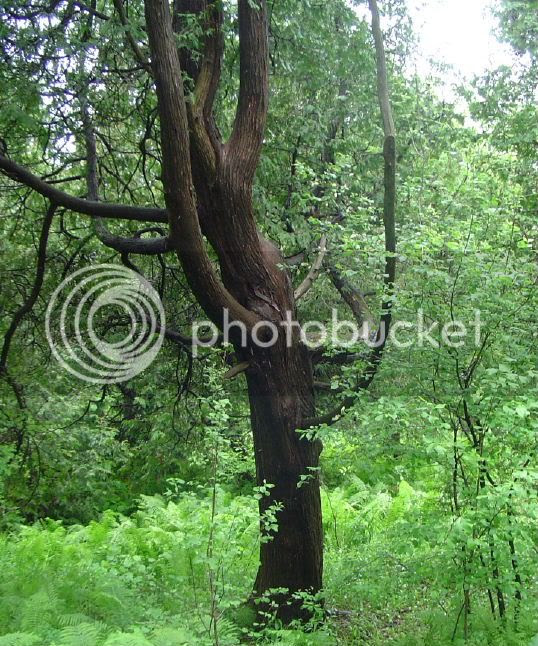 This cedar gives you an idea of their individuality. I refer to this one as Elephant Nose. 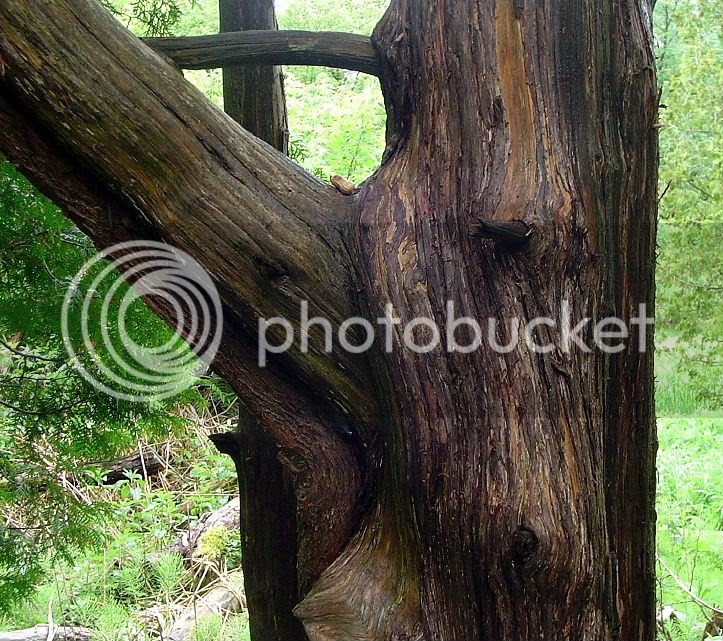 This shot illustrates the texture that I mentioned when the bark is wet. You can see it more clearly if you click on the photo to get a larger view. (Then hit your back button to get back to this page.) You may also note the peanut I left for a squirrel or bluejay. 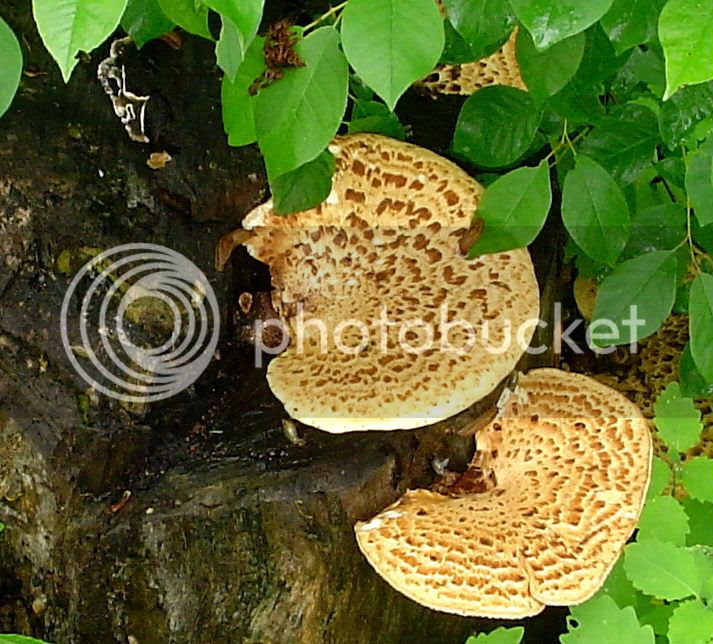 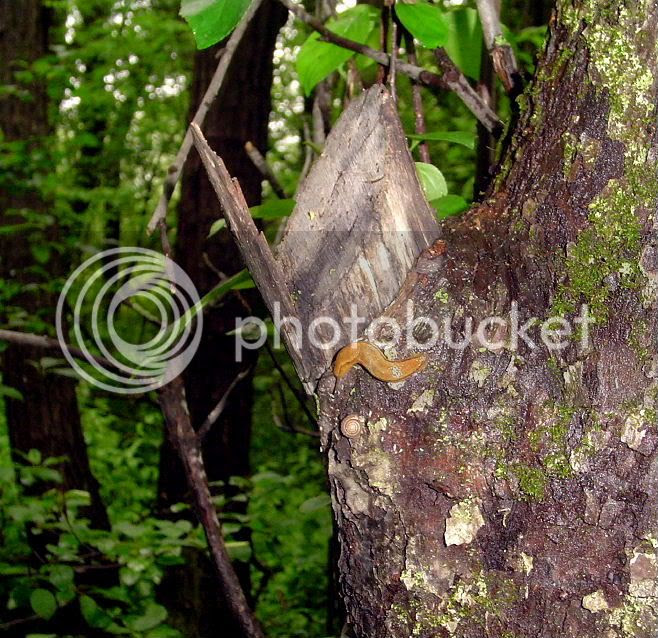 This enterprising slug and snail climbed nearly six feet up a tree. If gooey critters ain't your cuppa, you'd best skip over the next shot. 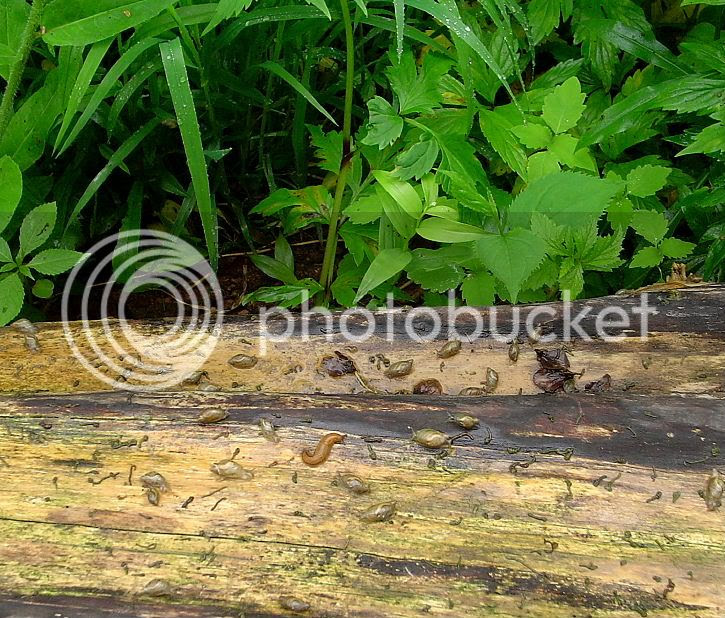 This log was alive with tiny slugs and snails after a couple of rainy days. 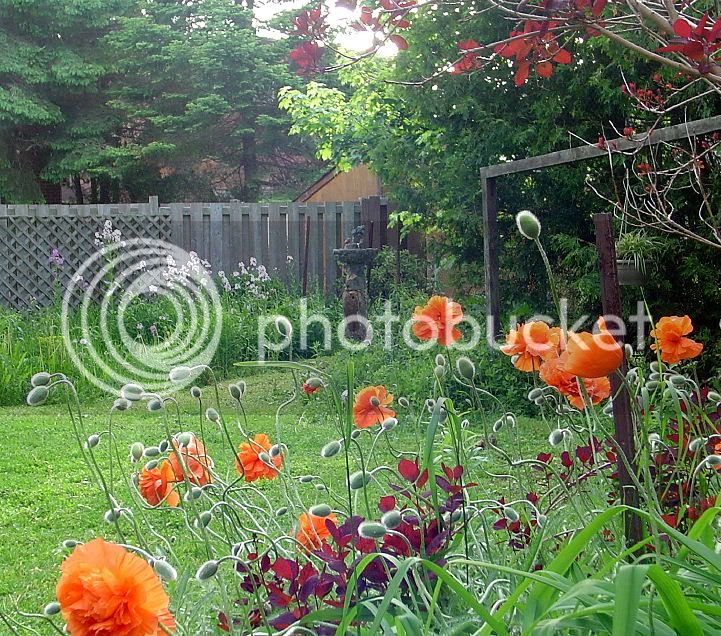 This is the north half of my backyard. In the background, you can see the spiffy birdbath Hilary got me for my birthday. A couple of days after this shot, all the poppies you can see in the foreground burst open in a blaze of short-lived, orange glory. 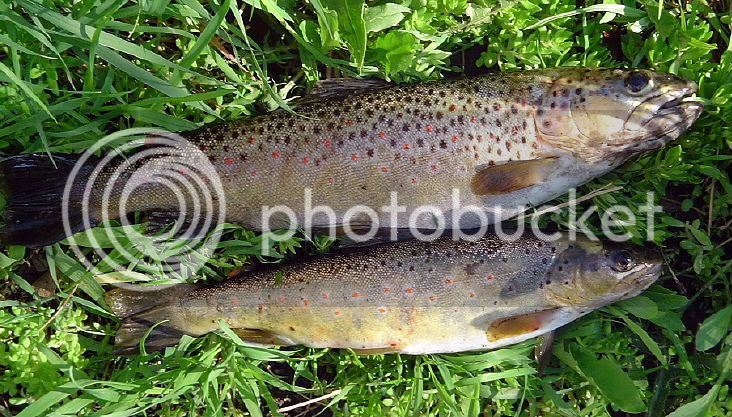 I'll wrap up by showing the results of a fishing foray to a small stream about a half-hour's drive away: two nice brown trout. The bigger one was 16 inches. Both did my frying pan proud.
Posted by Frank Baron at 11:26 AM 18 comments:

Crows Among The Standing People (#197)

Soggy out there this morning and overcast. Lots of rain yesterday and more on the way today. Couldn’t find my rubber boots (memo to self: clobber one of the boys) so I put on the hiking shoes I bought yesterday. The puddly, mucky path would soon show me if they were more weatherproof than their disappointing predecessors.

I am always struck by how impressive the cedars look when their bark is soaked. The saturated moisture enhances their already-considerable character. Each of the old trees is distinct from its neighbour in the tilt of its trunk and the arrangement of arched limbs, whorls and scars. And the differences seem more stark when the trees are wet. They truly are a marvel and being among them is humbling. They speak of endurance, patience and the wisdom of ages. I better understand why many First Nations people refer to trees as Standing People.

And of course, there’s the green. Post-rain green - the green of the ferns, grasses, flower stems and leaves - is the greenest of greens. All in all, a treat for the eyes this morning. Much different from the “usual” treat of a sunny, early summer day.

As we normally do, Benny and I followed the dirt path along the creek north of the dam. I paused at the three rocks to place a peanut on a nearby willow limb. Ben was a few yards ahead, as he often is. Nearby, crows cawed their approach. I answered in kind, declaring my own presence. Suddenly, their calling was very close and raucous with alarm. I looked ahead along the path just as Ben turned back to look at me. Between us, but much closer to Ben, was a fledgling crow hopping along the path.

It beats the heck out of me why Ben didn’t make a move to chase the bird. He chases every moving object smaller than a jumbo jet. Maybe he was distracted by the adult crows’ clamour. Maybe he sensed my panicky “No! Don’t” thoughts. In any event, he responded immediately to my beckon and call, ran past the young crow, within 12 inches in fact, and back to me.

I stood rooted in the path for a moment, torn with indecision. Should I try to intervene? The fledgling was hopping along uncertainly, with an occasional wobble. I could put the leash back on Ben, tether him to something and try to assist the crow. But how? By lifting it into a tree? Did it even need assistance? It appeared more bewildered than injured. Would the adults allow me to approach it?

There were three adult crows that I could see. The nearest was in a maple sapling only slightly above my eye level and 15 feet away. I looked at him and asked aloud, “What would you have me do?”

Can’t say he answered me but I felt the right thing to do was turn around and leave the way we came. During my half-minute of pondering - as Ben circled my legs, awaiting our next move - the cawing had lost its frantic edge but remained near-constant, a worried muttering.

I turned my back and called Ben to follow. Within three steps, the cawing behind us ceased.

I think we made the right call. (Or, as Hilary might write, caw-l.)

And the boots were fine.

###
Addendum: I wrote the above last Thursday but decided not to mail/post it right away. Friday morning, the fledgling and several adults were still there. This time, the youngster was in a small bush, only about three feet off the ground. Again, I paused to ponder whether I should intervene. The adults weren’t as frantic as they were the day before but their soft caws still evidenced concern. I usually travel out of town every weekend to stay at Hilary’s and was to leave in a couple of hours.

The adults were obviously minding the bird. Although I hadn’t witnessed it, I’m sure they were providing the youngster with food. The weather was mild. My main concern was its vulnerability to predators.

Once again, I decided to leave him be.

However, I spent a goodly portion of the weekend fretting and set out this morning, Monday, very anxious to not-see a certain bird.

I heard no cautionary caws as I neared the area and saw no adults. But it didn’t take me long to spot the fledgling - preening unconcernedly - about 30 feet above me in a maple tree. Obviously, over the weekend, the youngster had either brushed up on his tree-climbing skills or he had figured out how to work those wings a little.

Colour me relieved. He seems fine. I’m reasonably sure that the absence of mindful adults is proof that the crisis has passed.