I don’t have the time, inclination or heart to tell the whole story now. Nor, most likely, would you want to read it. It’s the sort of mundane story that doesn’t make the news, despite what seems to be the requisite ingredients of drama, tragedy and pathos. It’s a story being enacted near you right now.

25 years ago I married a woman named Helen. She was kind and intelligent, tall, slim and lovely. Shortly after, while she was pregnant with our first son, I learned she had a serious drinking problem. The problem persisted over the years, despite several stays in treatment centres, sessions with counselors and a flirtation with AA. Her longest sober period during those 25 years was 18 months, during which stretch she became pregnant with our second child. That 18-month hiatus was broken during the pregnancy.

When we married, Helen was a registered nurse. Five years later, she was driving a cab, the first of several menial jobs. At first, she was a classic binge drinker - staying sober for days, sometimes a couple of weeks - then drinking herself into oblivion for a period of days or weeks. Later, she “managed” her drinking by holding herself to a half-litre of vodka a day. Unless she was celebrating something. Or sad about something. Or the weather changed. Then she’d double her quota.

Gradually, I gave up hope of ever having a more-or-less normal relationship. Ours became functionally dysfunctional. Several years ago we separated in all ways except for living in the same house. She lived in her space. I lived in mine. The boys learned that an unresponsive mother slumped in a chair or on the couch was their norm.

Until a couple of years ago, she managed to work at least several months a year. At that time, she took a leave of absence to help care for her ailing mother. Without the enforced eight-hours per day of sobriety her job provided, she started drinking more often, more heavily.

Last summer she began having seizures when too many hours elapsed between drinks. The boys and I simply could no longer deal with the falls, the blood, the ambulance calls. Her mother had since moved into a nursing home. We insisted that Helen move into her mother’s place a half-hour drive away, near her brothers, and she did.

She entered one more treatment centre in January of this year. Our sons were cautiously optimistic that this time she would emerge healthy and stay that way. But she was drinking again the day after her 3-week stay was over.

Last Saturday she called her brother and asked him to bring her some soft drinks. When he arrived, she was in the bathroom and didn’t respond to his call. He opened the door and found her unresponsive on the floor. Paramedics were called. They worked on her for an hour but she was gone. She was 55.

During much of our marriage, aside from our sons, I couldn’t think of many positives that came from our relationship. All too often, my focus was on the broken promises, the lies, the sense of loss, the worry, the hurt.

But it was Helen who bought Lucy, our parrot, who bonded with me and is a daily delight. And it was Helen, much to my chagrin at the time, who decided to buy a certain Jack Russell Terror and dubbed him Benny.

When healthy (sober) Helen loved to garden. Although she hadn’t worked on our garden in many years, the roses and clematis and lilies she planted 20-some years ago are flourishing during this hot, wet summer. I’ve enjoyed sitting back there this year and wanted to tell her how nice they looked. I meant to tell her when we talked briefly on the phone two days before she died. But I forgot.

So, instead, I clipped three of her beautiful roses and they were cremated with her.

I’ve come to understand that however much pain her drinking inflicted on her loved ones, her own pain ran deeper and darker. She was a good person unable to cope with a terrible problem.

The other day, while looking under the couch for the air pump, Son #1 came across a cribbage board I’d forgotten about. It’s carved in the shape of a trout. A rainbow trout to be precise.

Here’s a picture of it: 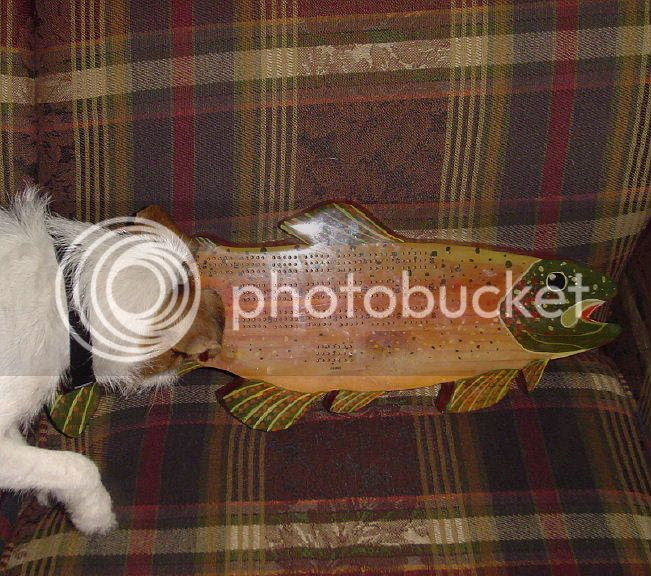 As you can plainly see, it’s a very spiffy board. (As you can also plainly see, just as I was about to snap the pic, Benny noticed I was doing Something Interesting and had to investigate.) I have some recollection of receiving the board as a gift but am embarrassed to admit I’ve forgotten from whom. (Maybe I’ll find out when/if they read this.)

I learned to play cribbage as a child by watching my father play with relatives, friends, and the salesmen who visited our furniture store. I played Dad in practice games and he exhibited the same patience he did while fishing. In my opinion, it’s the best two-handed card game in the world.

An early, and fond memory is of whupping my Uncle Walter in a game or two when I was about seven years old. We were playing at my grandparent’s home during one of the regular family get-togethers.

I was pretty excited. We were playing for money -- a nickel a game, a dime a skunk. (To be skunked in cribbage is to lose by more than 30 points.) I’d never played for money before and was pretty nervous. Most likely because I didn’t have a nickel, let alone a whole dime.

It didn’t seem to matter however, as I could do no wrong. If, in one hand, I only had seven points, poor Uncle Walter would only have four. Occasionally, other relatives would pass by to watch and kibbitz.

More than once, Uncle Val would look at Uncle Walter’s cards and say something like, “Why the heck are you keeping those?”

Uncle Walter would shush him and say he knew what he was doing.

I was too focused on my own cards to pay much attention to his. All I knew was that a couple of games later, I was deliriously happy and 10 cents richer.

I had beaten an adult at cribbage!

It took a decade or two for me to come to the realization that Uncle Walter let me win. As the years passed, I would think about that day now and again. I realized that he taught me an extremely important life lesson - that you don’t have to win to be a winner.

Uncle Walter must be in his 80s now. He and Aunt Jan moved to Nova Scotia about 20 years ago and I haven’t seen them since. We email now and again though, and a while ago I reminded him of the story I just told. Finding that spiffy board prompted me to pass the story along.

Thanks Uncle Walter. You’re a good man. I hope to get out to see you some day soon. I’ll be a good sport and give you a chance to win your dime back.

###
Those of you who can’t get enough of Benny stories and pictures really should check out Hilary’s blog regularly. She posts more often than I do and often about things we’ve done together. Recently, she’s told of our trip to the cottage and other adventures, replete with pictures, videos and darn good commentary. Check it out at: http://thesmittenimage.blogspot.com/

###
Here’s a shot of Benny I took a couple of weeks ago at the cottage. After a full day of eating waves and gnawing sticks, he contemplates tomorrow’s mischief. 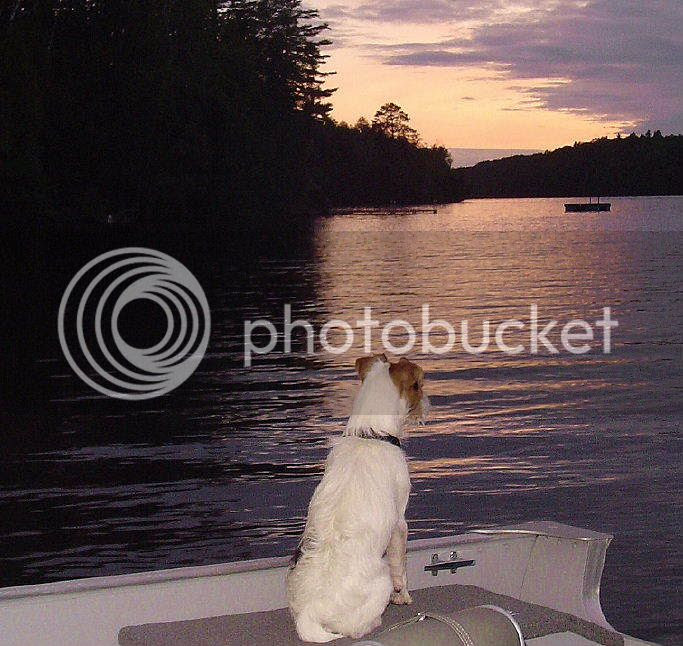