Yep, Another Excerpt From: Walking With Benny (#204)

First, a bit of background about Jack Russell Terriers, of which Benny is one: Reverend John Russell, of Devonshire, England, originated the breed in the mid-late 1800s. He wanted the perfect dog for hunting foxes. And he pretty much got it. They are compact, strong, agile and intelligent. (Debate, in some circles, still rages over the latter characteristic.) However, most of today's JRTs aren't getting much fox action at all. It's been my experience, via Benny, that they have happily adapted to chasing squirrels as their primary raison d'etre.

There’s a sleek, young-looking black squirrel at the top end of the grove who has begun waiting for me every morning. Or more properly, waiting for my peanuts. I leave two in his territory, one on each of two adjoining cedars. At first I’d rarely see him, but on the return portion of our walk some 20 minutes later, the two peanuts were nearly always gone.

Sometimes I’d spot him on our way back, usually higher up in one of the cedars. But recently, on a couple of occasions, he appeared to shadow me as I walked through the grove, hopping from tree to tree alongside me, some 10-15 feet away. It dawned on me that the little beggar recognized me now and, having stashed or eaten the first two peanuts, was hoping for another for the road.

I’ve always believed diligence should be rewarded. I told him so and left one.

So for about the last week, as Ben and I were on the home leg of our morning walk, there he’d be - all but checking his watch and tapping his foot - awaiting his third peanut.

Unfortunately, a couple of days ago, Ben cottoned on to this. Usually, he’s 30-50 feet ahead of me and intent upon his nose’s business. But on this day, he happened to turn and saw the little guy scurry down the tree trunk to get his bonus treat. So, both yesterday and today, Ben has dashed ahead to those trees, looking for the squirrel who is looking for me. (Okay, my peanut.) As the squirrel clambers down a tree at my approach, Ben tries to clamber up it to meet him. The squirrel is not at all fond of this game and retreats a foot or two.

Ben, of course, interprets this as him winning! So, he redoubles his tree-climbing efforts.

Party pooper that I am, I call a halt to the proceedings by leaving a peanut and calling Ben away.

###
Many of the folks I meet on our walks, especially those who profess familiarity with terriers in general and JRTs in particular, comment on how well Ben listens when off the leash. I adopt an appropriately modest expression and mutter something about it taking a lot of work. And that’s no lie. But I think one practice in particular has helped.

Ben eats two smallish meals a day, morning and evening, and I always walk him before he’s eaten. I theorized that a hungry dog is more apt to want to stay in touch with his meal ticket.

So, there’s one of the secrets to becoming a Jack Russell whisperer and I suspect it’s applicable to every breed: Walk a hungry dog.

Sure, he’s going to swallow every rotten salmon egg he comes across but the occasional bit of barfing is better than chasing him all over heck’s half-acre.
Posted by Frank Baron at 1:46 PM 27 comments:

Well, I wasn’t fibbing. Hilary and I went to the cottage last week and had a fine time. There’s something to love about every time of year up there but autumn is my favourite. Days are still warm, nights cool and refreshing. The surrounding woods are busy with squirrels, chipmunks, raccoons and birds looking to fatten up before weathering winter’s chill, or heading south ahead of it.

The fishing is generally poor but being bathed in warm, golden September sun while keeping an eye out for eagles and other wildlife makes up for it.

And best of all...the mosquitoes are history. Hallelujah and pass the wieners! I love sitting around a fire in the evening but hordes of skitters make doing so unpleasant in the summer months (unless we get a rare, strongish, on-shore evening breeze).

I can’t think of a finer way to celebrate the passing of a beautiful day than sitting around a fire, sipping a soothing beverage, admiring the stars and listening to loons calling goodnight to each other.

So, I spent a portion of every day gathering firewood for that evening’s fire. This involved trundling up the driveway with a wheelbarrow and sorting through the deadfall which blankets the surrounding forest floor.

Much of the wood is punky, having lain too long against the ground and absorbing too much water but a lot of it is fine. Most of my focus is on birch, maple or oak limbs about as big around as my fist but I also gather a lot of finger-width kindling and a handful of wire-thin twigs for starter fuel.

Some of the pieces of wood are up to 12 feet long. The thinner ones I snap with my hands or across my knee. The thicker ones I prop against the wheelbarrow or tree trunk and break with a kick.

Benny, who rarely lets me out of his sight, no longer accompanies me on these missions. I finally scolded him VERY severely one day a couple of years ago. I got fed up with having to wrestle with him for every single piece of wood I touched. Now, he stays with Hilary when I fetch the wheelbarrow.

It takes about a half-hour to 40 minutes to gather a load of wood that will keep burning for a few hours. A half-hour to 40 minutes of bending, stretching, dragging and stomping. It didn’t used to take so long. But apparently gravity’s gotten stronger over the years, resulting in each piece of wood getting slightly heavier and increased effort being required to straighten up again after bending and lifting. I can only surmise that all the scientists are too darn busy focusing on global warming to notice this new threat.

On my third gathering foray, my lower back started yelling at me. It had muttered a tad the day before but I found it easy enough to tune out -- like when your Significant Other is talking about something non sports-related.

There was no ignoring it this time, though. It went from a dull ache to an ouchy cramp in no time. I needed to rest it somewhere for a minute or three.

A nearby poplar, about as big around as me, was listing at about a 25 degree angle. Chances are, it will join its brethren on the forest floor in 10-15 years. For now though, it still had a goodly grip on the soil. I found I could brace my feet on its protruding roots, skootch down a smidge and lean back against its trunk, easing my discomfort considerably.

Greatly appreciative, I thanked the tree and rested against it. Then I began to consider all that trees do for us.

They provide shelter, food, medicine and protection for animals and man. As if that isn’t enough, while they’re at it, they produce oxygen for the whole planet. We use them to build houses and furniture, to make newspapers and toilet tissue. We gather their broken limbs to warm us and cook food and keep us safe against the things that go bump in the night.

We climb them for adventure, enjoy their shade on hot summer days and string hammocks between their trunks.

And sometimes we lean against them to soothe a sore back.

While doing so, and several times since, I tried to think of another form of life nearly so beneficent to mankind. Couldn’t.

Have you thanked a tree today?
Posted by Frank Baron at 1:02 PM 22 comments:

A Clue To My Whereabouts

and what I'll be doing for the next several days.

You're an astute lot. I know you'll figure it out. 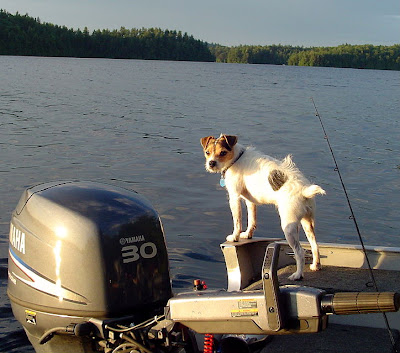 1 - All living things have an inherent nobility and deserve respect.

3 - Women and men are different.

4 - No treasure is more dear than a true friend.

5 - Despite radical differences among breeds, all dogs excel at companionship.

6 - Baseball is a beautiful game.

7 - Fishing helps me stay in tune with Nature and hence, myself.

8 - Service to others is our most noble calling.

9 - Children know important things that most of us have forgotten.

10 - Newsprint gets smaller and blurrier once you turn 50.

I was going to elaborate on each, briefly, but of course I started running off at the brain and quickly realized I’d tax your patience (and risk numbing your lips) if I did. So, maybe I will on a few of them in a day or three. Or not. Maybe they don’t need no steenkin’ elaboration.