Last week at Hilary's I went for a wee walk one evening, camera in tow. Had what I thought was a clever idea for a Christmas post on my photo blog: wander around the streets and take night shots of the Christmas lights and displays on folks' lawns.

So, I did. Most of the shots were okay but something was missing. Snow, for one. Southern Ontario is green and Christmas lights lose some zing without that white backdrop. Reviewing the pics, I reluctantly decided to shelve the idea.

One photo kept nagging at me, though. I liked it. Somehow, it hinted at perhaps my favourite aspect of Christmas: a child's wonder. 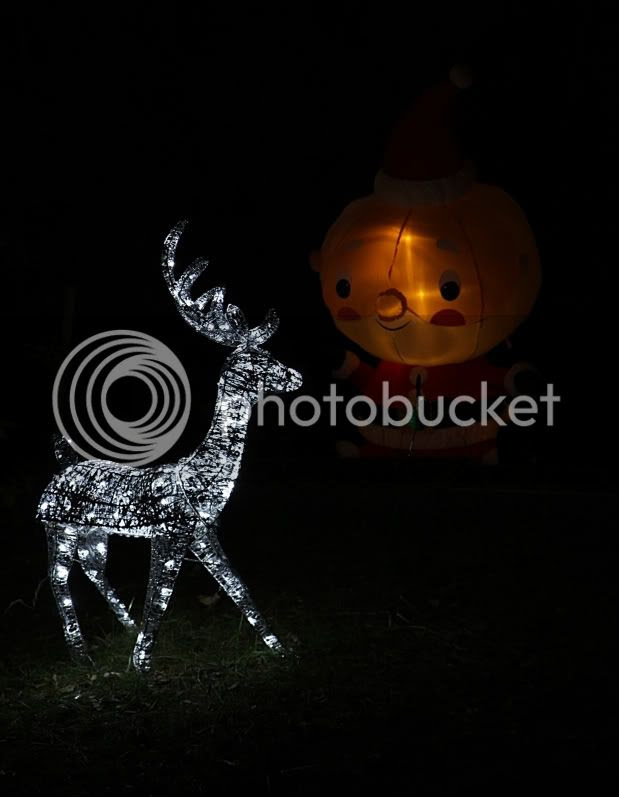 Yeah, a chubby elf-like balloon and a silver deer. But it works for me.


###
I'm a longtime Dave Letterman fan. Been watching him and Paul do their thing for about 30 years. I try never to miss his Christmas broadcast, mostly because it features Darlene Love singing Christmas (Baby, Please Don't Go).

Every year she's wonderful. Every year, I wonder if she can possibly pull it off again. She answered this year's question last night.

I hope you all find a measure of peace and contentment this season and that it sustains you throughout a healthy and prosperous 2012.

Now, let's enjoy Ms. Love's 25th appearance on Dave's show, doing what she does best: creating a joyful noise and offering it up to the world.

Crank up those speakers, do up those seatbelts, and have yourselves a very Merry Christmas!

We’re deep into the first week of December and evening’s curtain descends early. The clocks went back a few weeks ago and it’s only a few sleeps ‘til the longest night. It’s cloudy, so full dark will arrive by 5:00.

It’s 3:30 and I’m standing on the back deck, surveying my yard, camera within arm’s reach. The feeders are full and seed has been spread on the ground, on the pillars of the deck, and upon various flat surfaces within the yard. It’s breezy and verging on pretty-darn-cold-ish, about 2C (35F). I have my warmest sweatshirt on – a thick, black, hooded beastie that zips up the middle. It’s layered over a regular sweatshirt which tops a t-shirt. Blue jeans (over jockeys if you must know) adorn my lower unit. My feet are in semi-warm socks and your garden variety house slippers. I have a baseball cap on, backwards, so I can angle the camera vertically without the bill of the cap interfering. I realize the slippers are a weak point. But for now, I am comfortable.

I sip a fortified beverage and await visitors.

As does Ben, the Jack Russell Terror.

Which, I’m sure you’ll understand, limits the visitors to those whom Ben tolerates. Generally speaking, if they sport wings, he tolerates them. (Unless he’s only had one walk that day and there’s no squirrels around. On those relatively rare occasions, he may chase anything -- while doing his best to convince himself and any appreciative human onlookers, how that mourning dove might possibly, kinda, if the sun was in your eyes just so, have looked a little like it could have been a squirrel.)

Most afternoons my favourite wee birds, the chickadees, are the first to arrive. If the blue jays are in the hood, they’ll swoop down right away as well. They want those peanuts before those dang squirrels get ‘em.

There are four of those dang squirrels, all of whom are black. Having watched the family throughout the spring and summer, we refer to them as Mom and One/Two/Three Of The Triplets. Normally, at any given time, one or all of them are scouting the yard for goodies, whilst keeping a wary eye/ear out for Ben.

It is these interlopers for whom Ben has sworn eternal enmity. Luckily for the squirrels - for all of us, really - Ben is quite un-terrier-like when actually in a position to do damage. I’ve seen him catch a squirrel. Twice. Each time, he took a half-hearted nip of squirrel tail and stopped – waiting for his prey to regain its equilibrium and the chase to re-begin.

Wise Momma Squirrel had Ben figured early, of course. She knew exactly how high he could jump and stayed just out of reach. (Why did the words, “how like a woman” just leap into my head?) In any event, her progeny, though not so self-assured as Momma, soon learned Ben’s moves and reacted (or not) accordingly.

Tonight there are no chickadees or jays. But I’m thrilled with a couple of visits by a female Downy woodpecker to a suet basket hanging within decent range of my zoom lens. During two visits to the suet, totaling perhaps three minutes, I shoot nearly 100 frames. (You’ll likely see the best of the results on my photo blog one of these months.)

By the time the Downy leaves the second time, darkness is enfolding the yard. I shoo Ben inside and he doesn't argue much. It's getting cold for real. I re-fortify my beverage and return to the deck.

The squirrels, two of them, are enjoying Ben’s absence. As usual, they take no notice of me. The clumsy Two-Legs-Who-Brings-Food is no cause for alarm.

Full dark in a few.

The sparrows arrive in a noisy conglomeration, 25 strong. And leave in a flurry, after a quick nosh.

The usual latecomers, the juncos and mourning doves, arrive next. It’s too dark to photograph critters and has been for several minutes. I put the camera in the house and fend off Ben’s half-hearted attempt to follow, before heading back outside for a few more moments.

Clouds mottled with magenta and purple drift over the western horizon. The temperature has plummeted with the light, and darn-near as dramatically. I realize I can’t feel my toes. Darn stupid old age and stupider post-stupid-heart-attack circulation! 10 years ago, it would’ve taken another hour or two and standing knee-deep in river water before I numbed out.

A soft tik-tik in the near-dark of the cedar hedge heralds the arrival of the latest visitors to Chez Baron. So, I postpone my departure for a bit, rocking side-to-side and trying to flex my toes. A male and female cardinal are always the last to arrive. I can just barely make out their silhouettes along the fence.

But it’s too-soon fully dark and I’m too-soon cold to the bone, despite the fortifying beverages. I’m grateful for the warmth my house offers. And grateful that I could watch Ben squabble with the squirrels and the birds gather to feed and a sunset that kissed the sky goodnight with passionate colour.

I remind myself that winter doesn’t last forever. And that a guy in longjohns and a snowmobile suit can stay pretty darn toasty for hours without moving a heck of a lot.

I did something that kind of surprised me last week. I started a message board.

“What the heck is a message board, Frank?” some of you ask.

Well, it’s like Facebook. Ish. Only older-tech. Sorta’. It’s a place on the interweb where folks can have a leisurely conversation with each other, or post a joke or cartoon or link to something they find interesting.

Anyway, initially I thought I’d start one that was mostly of interest to writers. Because writing is a major interest of mine.

But so, I realized, is photography and the outdoors and fishing and music and art and philosophizing and opining about various subjects. So, whether or not you have an interest in writing, I hope you’ll take a peek and consider joining. All you need do is invent a user name and a password. Then post a howdy-do in the Introductions area (or anywhere) and before you know it, you’ll be message-boarding!

Drop me a line if you have any questions or difficulties.

The board is called Writer’s Nest and you can find it here: http://bwritersnest.runboard.com/

Hope to see a few old friends, make a few new ones, and get to know some of you a lot better.
Posted by Frank Baron at 8:23 PM 19 comments: