Some winter mornings are Creator-kissed and glisten with near-blinding brilliance. (Click on the pictures for a larger view.) 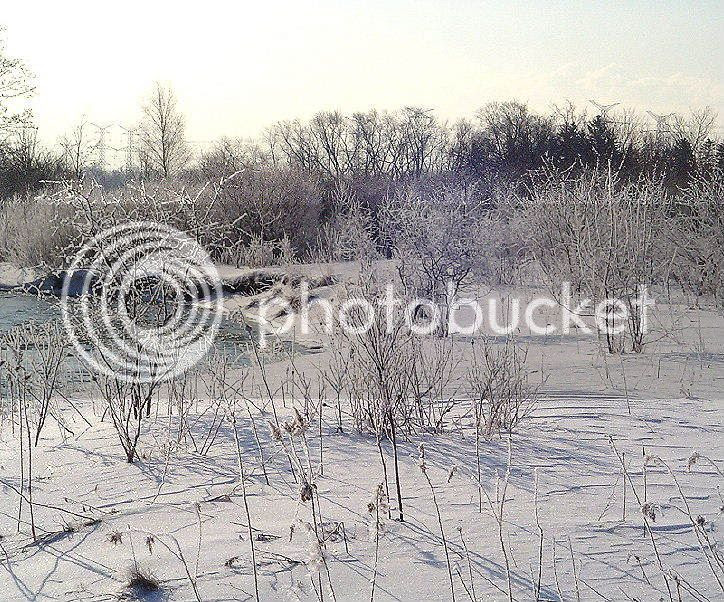 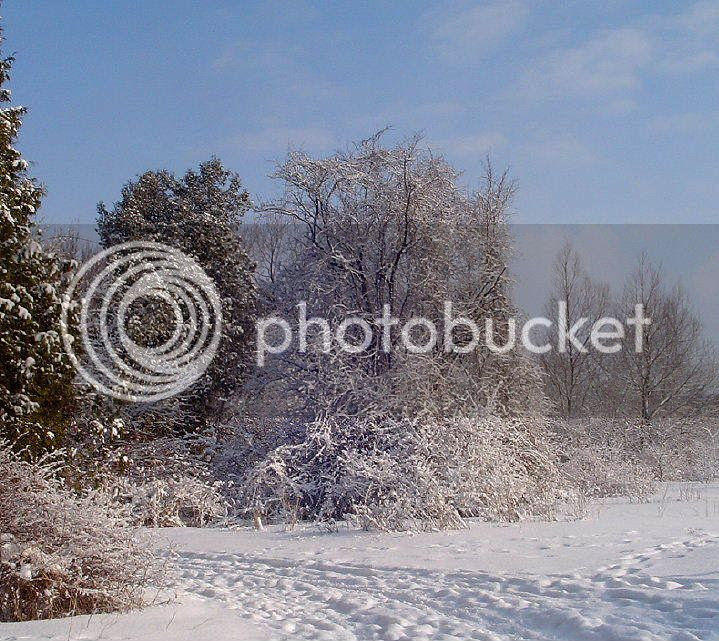 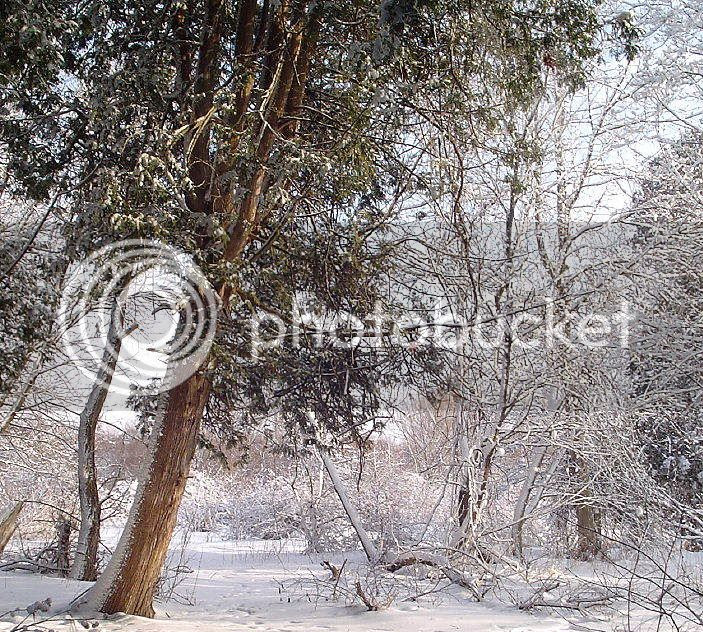 My eyes can rest a bit in the relative gloom of the cedar grove. 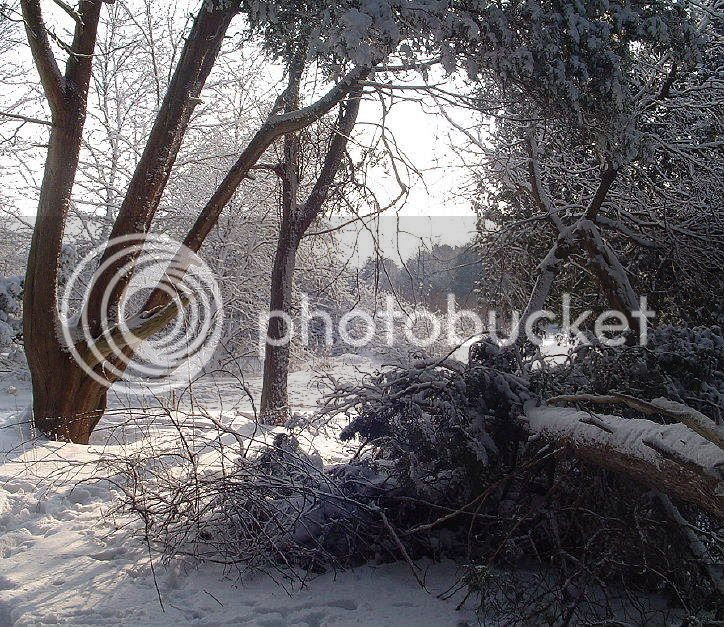 On another day, a warmer one, mist adds to the beauty and mood, almost softening the jagged chunks of ice in the foreground. 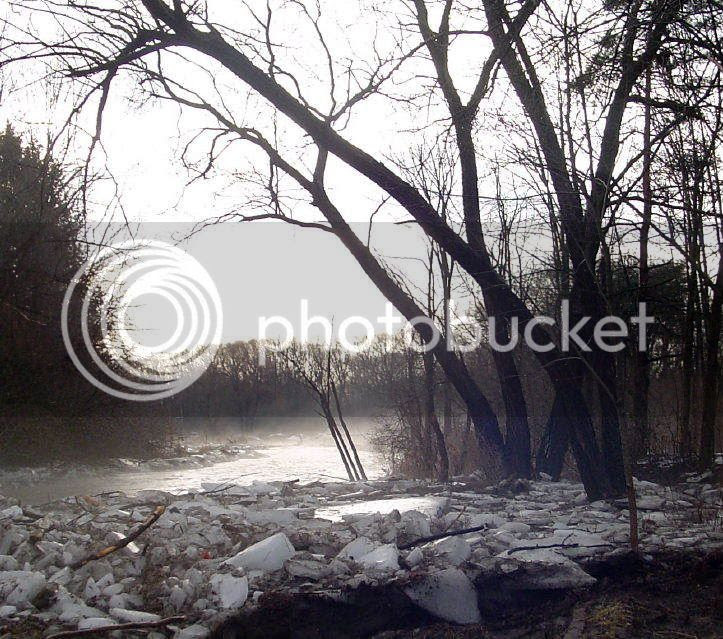 Views like this are our reward for enduring weeks of below-freezing temperatures and shoveling tons of snow. 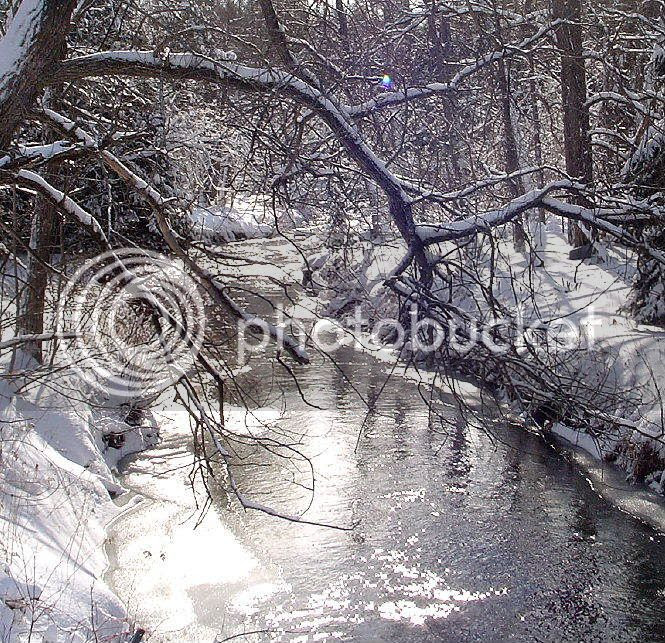 A small tree in my backyard bows under its snowy burden. After taking the shot, I stepped outside, shook off the snow and the tree sprang back up, I trust, gratefully. 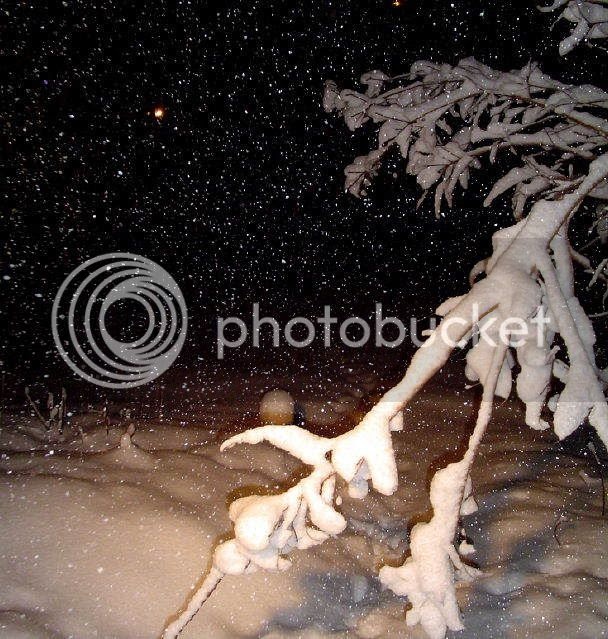 In a few short weeks, the cushions will be back on the chairs and I'll be sitting there, enjoying a beverage.

I hope. I really, really hope. This has been a lovely, Currier-&-Ives-like, but overly-long winter. 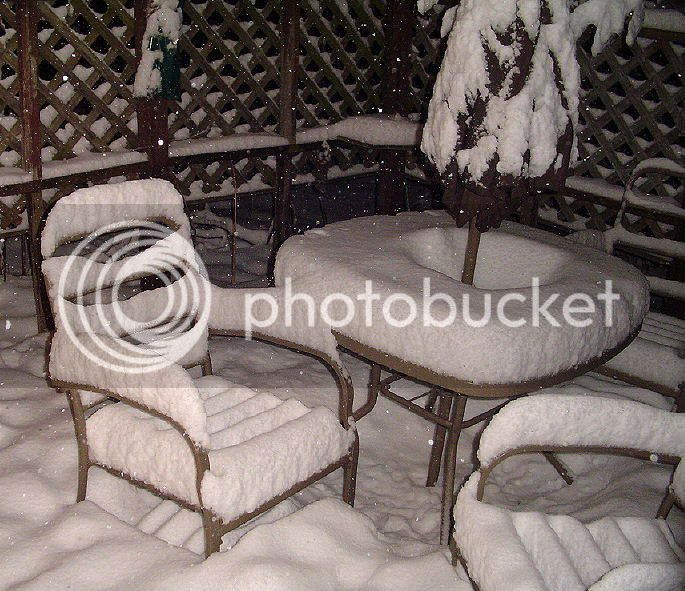 It’s been closer to me, for longer, than anything else in my life. For more than thirty-five years I shared with it my dreams, my hopes, my despair, my tears, my prayers. Virtually every day. More accurately, every night.

“It” is an overstuffed, feather-filled pillow that might once have belonged to my grandmother or great-grandmother. It weighs in at a still-hefty 8-10 pounds. I can’t recall precisely when I took possession of it but it was probably when I left home for university in 1971. And it wasn't new then.

It is a wonderful pillow. I travel with it. In the nearly forty years we’ve been together, I don’t think we’ve slept apart much more than a dozen times.

Holy moley. That’s through two marriages, a dozen jobs and umpteen moves. Thousands and thousands of nights. At approximately eight hours a night that’s over a hundred thousand hours of cradling my head.

How many of you can say you’ve had any part of yourselves cradled by the same thing for over 100,000 hours? (Hair doesn’t count.)

I don’t see any hands. And I’m squinting.

So you can imagine how I felt when my pillow began falling apart a few years ago. Oh, I didn’t panic. I mean, a few feathers were working their way out. Big deal. It happens. As some of the exit holes became dime-sized though, I began to worry a bit. Not overly, because I did as any graduate of the Red Green School Of Handymanhood would do - I duct taped ‘em.

And that worked reasonably well for a few years, even when the holes became tears. Who cares if a pillow sports a few bits of tape here and there? Like laugh lines, they add character.

Lately though, every time I change the pillowcase, a few dozen loose feathers appear from new breaches. The tape isn’t holding very well any more and it appears the fabric itself is disintegrating.

The only logical conclusion of course, is to never change pillowcases again. Good job God invented Febreze. Just in time too.

I felt pretty good about that decision until I realized a complaint or two might eventually be voiced from someone else who may be sleeping in the same vicinity. So, the second most logical plan was to put another pillowcase on, a really good quality one, pull it sort of tight, sew it closed and trim off the extra fabric - making the pillowcase the new pillow. In a way.

And that’s what I meant to do as soon as I could talk someone with a sewing machine into doing it for me. I had high hopes for one of my sisters but was uncertain if any of them owned a sewing machine.

My fallback was sister-in-law Linda, who is Dutch. Dutch people own everything ever invented that has anything to do with housework or cleanliness. In fact, they own two of them, just in case. If she didn’t own a sewing machine it would only be because she could do a better job, and faster, by hand.

So that was my plan. As plans go, I felt it was one of my better ones.

Last Thursday, someone who shall remain nameless (it was Hilary) mused aloud.

“There must be millions upon millions of dust mites in that old pillow of yours. Possibly billions.”

Now, at the time those words were spoken, my head was resting upon that “old pillow” of mine. Upon it and billions of swarming dust mites - surging through the breaches of my pillow’s oft-taped hull.

It was time to abandon ship.

I have not slept well.

If I wanted to punch a temporary dent in my pillow to accommodate some part of my anatomy, a tender ear or achey jaw, it would stay punched. Not like foam or too-poofy new feathered pillows, which insist on pressing against every single part of your head.

I’ll probably have to go to some expensive store and part with hundreds of dollars for a densely-packed feathered pillow. Maybe I’ll even have to get one custom made. Because I can’t very well ask anyone to sew a new pillowcase on something that is disintegrating and is chock-ful of gazillions of dust mites can I?

Unless...unless someone...someone like, oh, I don’t know let’s say Linda - sees it as a challenge. I mean, if anyone on the planet could hermetically seal a near-forty-year-old disintegrating pillow teeming with hordes of disgruntled dust mites, it would pretty much have to be a person of Dutch descent.