When I was a kid - the eldest of six - the words “Be quiet!” were often followed by, “I can’t hear myself think!”

Things were too loud. There were too many distractions. The person (not unsurprisingly, usually a parent) needed some peace and quiet in order to gather themselves, to clarify their thoughts.

What do you see people doing now, on and off our town’s and city’s streets?

You see them walking while listening to their iPods. You see them driving with their radios cranked up to deafening levels. You see them wearing a headset and mashing buttons on a controller while riveted to a computer or tv screen. You see them shopping - loudly - with a cell phone stapled to their ear. You see them laughing at Seinfeld reruns while waiting for the prime time shows and then you see them fall asleep to Letterman before waking up with Regis.

I think a lot of people today are uncomfortable with, indeed are afraid of, silence. They don’t like stopping the input of sensory data. To be alone with themselves.

To hear themselves think.

“But Frank,” I hear you holler (because your earbuds are in and you’re talking louder than necessary) “I use my iPod as a focusing tool - to drown out other distractions!”

So we, clever beings that we are, bombard ourselves with chosen noise to drown out the other noise around us.

But it’s still noise. And it’s still preventing us from hearing ourselves think.

We in the developed nations are super-stimulated. We’re the ADD generation, constantly immersing ourselves in neuron-pinging media. We’re not sleeping well and we’re overweight. Our mental health is suffering, so we fix it with sleeping pills and Prozac, or self-medicate with booze and/or other, less legal substances.

I believe a goodly portion of what ails us can be traced to not hearing ourselves think. Like an overstimulated 2-year-old, we need quiet time. Regularly.

In my book I talked about how we’re becoming alienated from nature, how concrete and steel are shielding us from fields, trees, water and animals.

You don’t have to look far for evidence that we are also alienating ourselves from each other: Young people shoot other young people for ridiculous reasons. Fender-benders lead to mayhem. Conscienceless predators bilk the elderly out of life savings. Politicians serve their donors, not their voters.

All those ills are related. Tending the latter can be the first step in mending them all. Do yourself a favour. Whether it’s 15 minutes in a quiet part of the house, a peaceful lunch in a park or a hike in the woods, make time for some silence - regularly.

Give yourself the same respect you allot to those folks on the other end of your phone, or radio or tv screen: listen to yourself. You may be surprised at what you learn.
Posted by Frank Baron at 1:58 PM 35 comments:

There's a wood duck that hangs around a large pond (generously referred to by the locals as a "lake") near Hilary's place. We first noticed him last year. Normally, the pond is wall-to-wall mallards, so this little drake really stood out. Before too long, we noticed him keeping company with a female mallard. Not too surprising really. You’ll see what a handsome fellow he is in a minute.

Well, Woody quickly became a magnet for every wildlife photographer near and far. Hilary got some fine shots of him. I’m sure others did too.

Let me back up a tad here (although I mentioned this not too-too long ago).

There was a time, in the long-ago and far-away, when I fancied myself a decent photographer. I owned a couple of good cameras. I bought and digested hundreds of photography magazines and knew my way around a darkroom. I even came to understand, and manipulate, arcane concepts like depth of field! But I drifted away from it for nearly 20 years when the hobby became just too expensive.

Flash forward a couple of decades.

I bought Hilary a pretty good camera because I knew she had a gifted eye and encouraged her to start a blog. (Anyone who’s visited The Smitten Image knows how spectacularly that turned out.) Largely through her lens, my dormant photographer gene was reawakened and hallelujah! - digital photography was more affordable than its predecessors!

I haven’t yet treated myself to a digital SLR but, as mentioned a few weeks ago, I did buy a nice little grab-shot camera that fits into a pocket. And, if I do say so myself (and I just did if you’re scoring at home) I got a few decent shots from it.

On three different occasions, I had opportunities to shoot pics of Woody. Out of about 30-some snaps, two are keepers. That little rascal has a way of ducking (sorry) my focus.

Anyway, after that windy intro, here’s a couple of pics of Woody, as well as a few others taken semi-recently.

Here's the handsome devil in all his iridescent glory (Remember to click the photo if you'd like to see it enlarged): 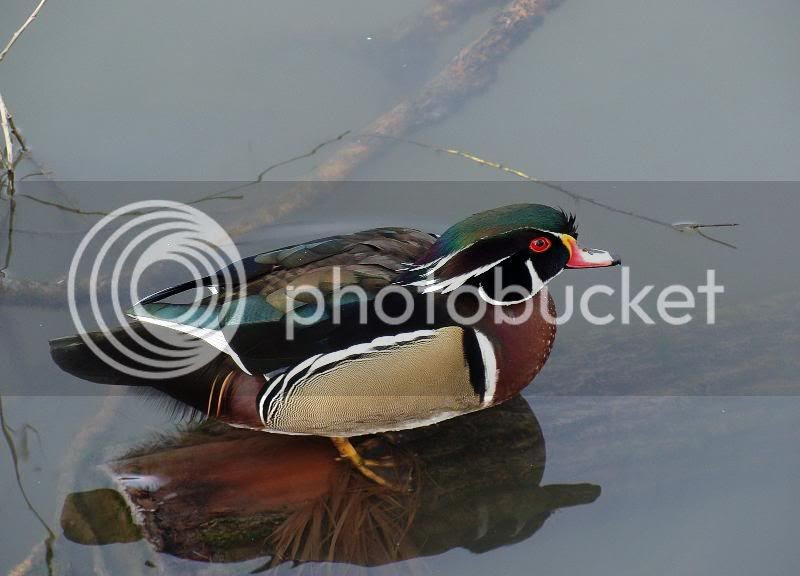 I like this next one because I think it captures his cocky personality. 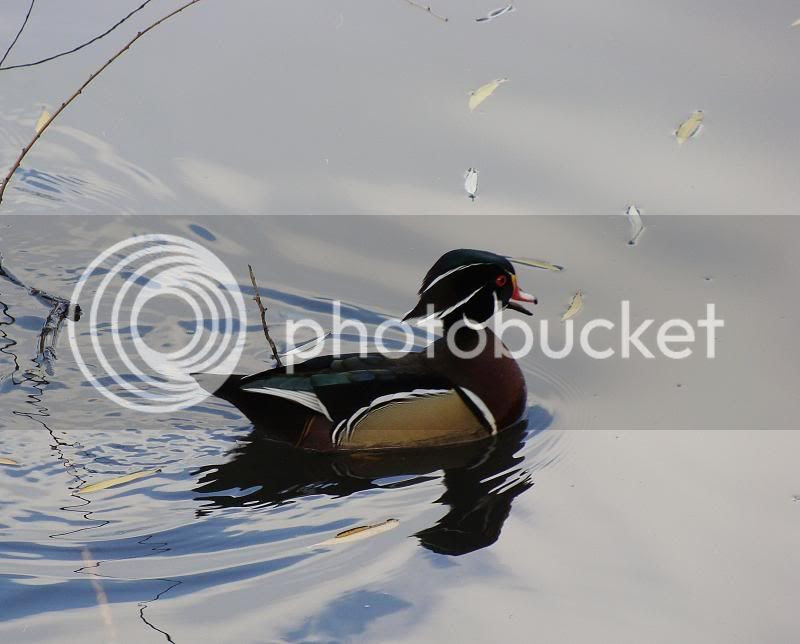 Remaining with our duck theme for a bit, here's a good looking mallard venturing onto the snow for a nibble. 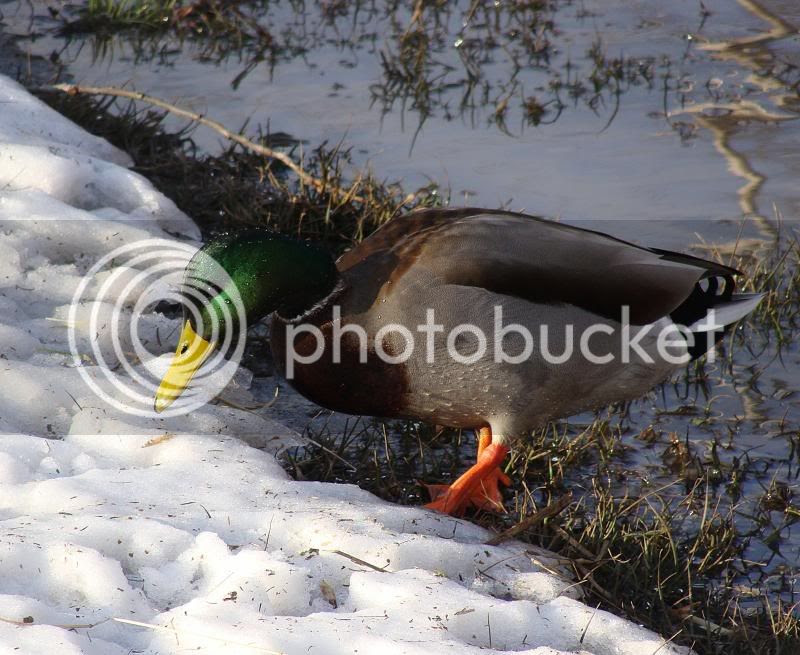 There's a wonderful, dead tree near the aforementioned pond at Hilary's. It's often a gathering spot for the local birds. At night, we can add "mysterious" and "ghostly" to its description. 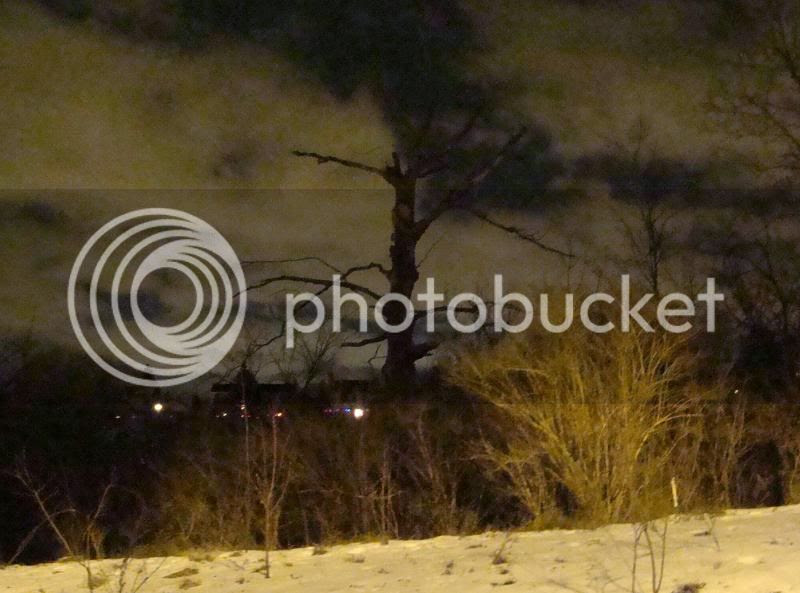 Here's a pic idea I shamelessly stole from Hilary. We were in a restaurant and she took a shot of this fixture. I really liked how it looked so I hauled out my camera and took one too. 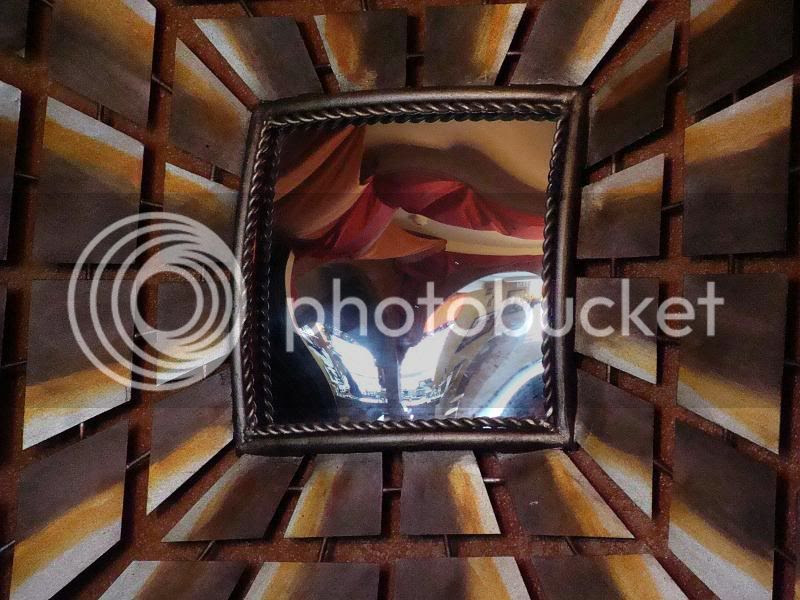 A couple of weeks ago, on an evening walk with Ben, I was saddened to see a rainbow trout in great distress. Most likely, an angler hooked him in a vulnerable area and released him anyway, hoping he'd recover. It was a middling-sized male, about five pounds, and he was being ushered downstream by the current. He was on his side and every few seconds would feebly try to right himself. He was unable to do so, even when he managed to thrash his way into a gentle eddy. The light was fading and he was some distance away but I took a couple of pics anyway. I walked along the bank parallel to him, encouraging him to find the strength to recover. I lost sight of him as he tumbled downstream in the dark. 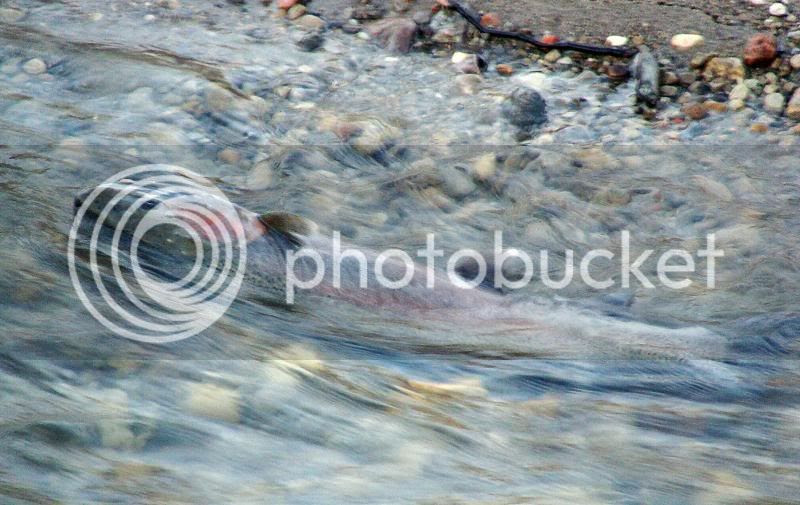 On a more cheerful note, here's a shot of one of Hilary's neighbour's Christmas lights. 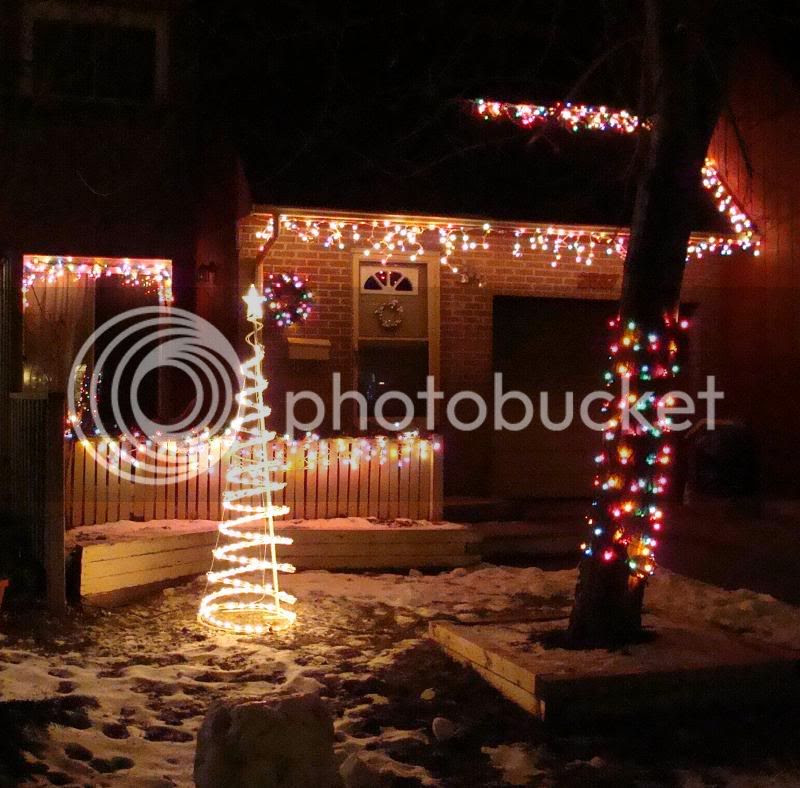 And we'll close this session with an "aww" shot of Hilary holding her newest neighbour, baby Lily. 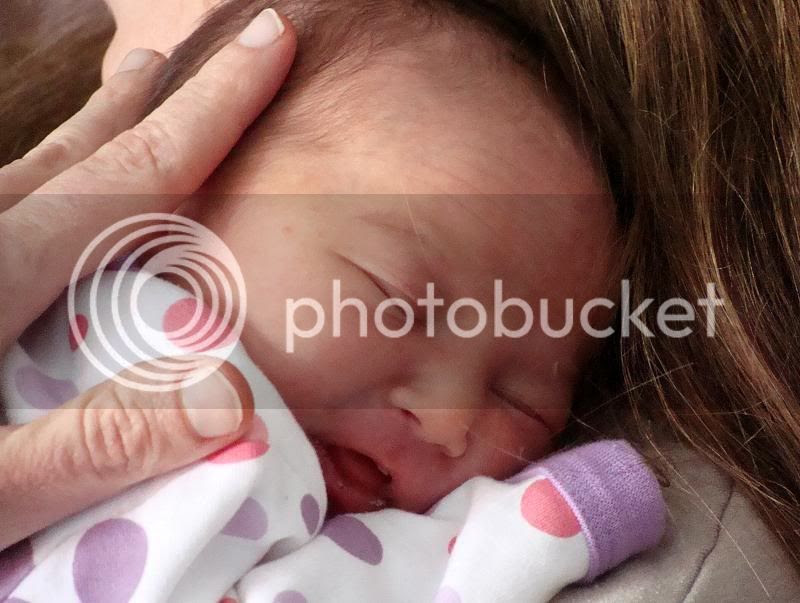