It's been a long, extended summer and parts of cottage country seem untouched by autumn's fingerpaints - like this path off the road. It used to lead to a swamp and was a favoured spot for frog-catchers in summer and duck hunters in fall. But as you can see by the meadow in the background, consecutive dry summers have evaporated all the water. 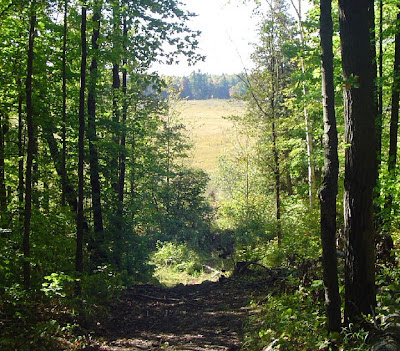 The picture below is more reflective of what the countryside looks like now. It will become even more colourful in the next week or so. 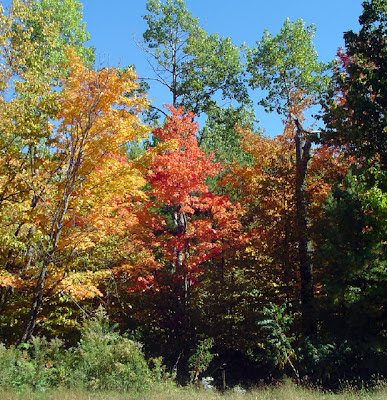 About a mile from our cottage is a lovely little lake from which we've plucked many a brook trout over the years. The path shown below, carved out by anglers, canoeists and campers, leads to it. 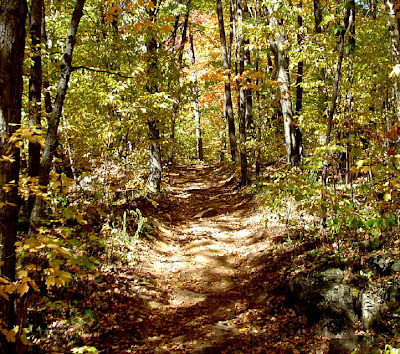 The next two shots are proof I wasn't lying about the "lovely" part. 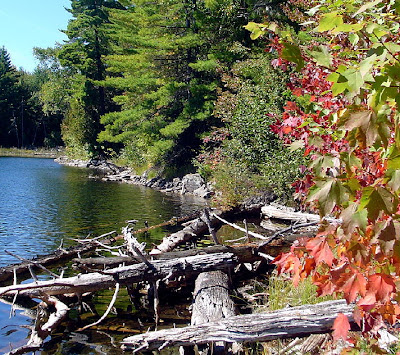 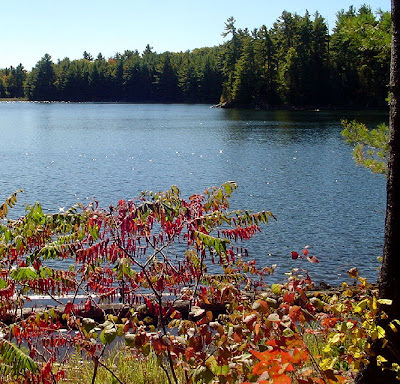 After a long day's hike...well...after a long, nearly-an-hour's hike, it feels good to take a load off the old pins. 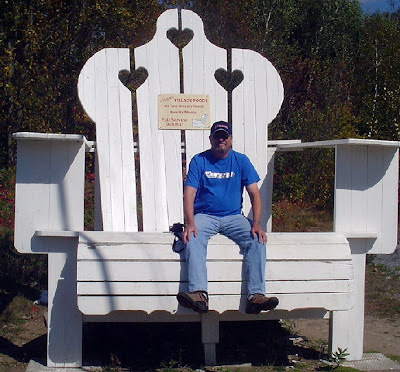 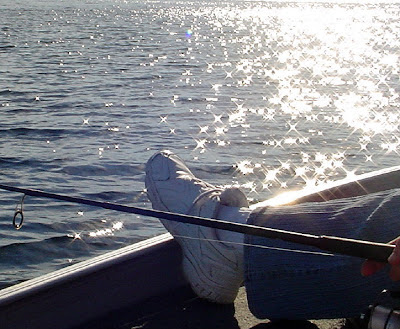 Some of you are itching to know how the fishing was. Well, when you have to resort to using a gaff in order to successfully land a largemouth bass, you know darn well you've got yourself a beauty! 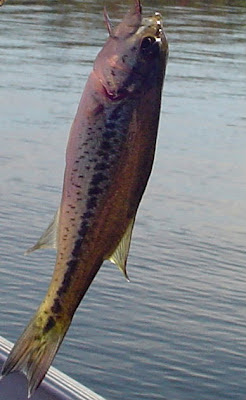 Or maybe you just learn about the importance of perspective.... 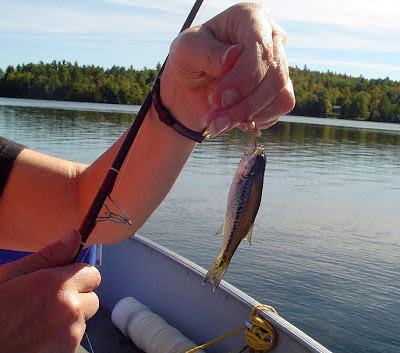 Sometimes I didn't know whether to focus on the reality or the reflection - so usually I opted for both. This, by the way, is our cottage's "front lawn." Some folks opt for clearing the brush and seeding grass. We're from the landscaping-by-Mother-Nature school of cottaging. 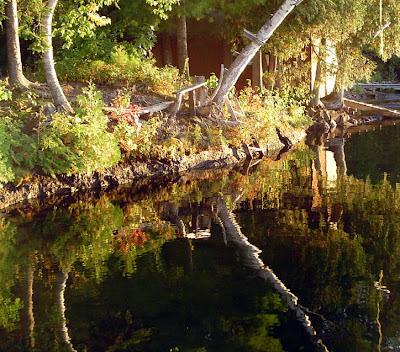 As evening draws down, it's time to start thinking about making a fire, sitting back, and sipping something smooth. 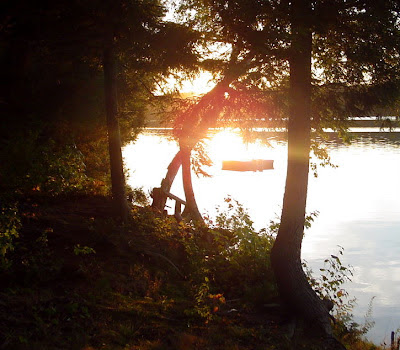 It just doesn't get any better than this folks. Glad you could join me.

Over at Hilary's blog, The Smitten Image, you can read her take on how the fishing went and see more fine pics.
Posted by Frank Baron at 1:29 PM 25 comments:

My summer sojourn at the cottage, initially intended to last several days, turned into two (2). It was one of those things. Oh, who am I trying to kid? It was many of those things, some of which I might write about one of these days.

Anyway, I’m not writing anything for a week or so because - you guessed it! I’m going back up to the cottage to bask and loll and fish and roast wieners over a fire. (Baskin’ & Lollin’= what you do when you eat too much ice cream.)

When I come back I’ll most likely post a bunch of pictures and bore you good folks to tears with my tales of sloth.

Eat your hearts out.
Posted by Frank Baron at 9:35 AM 3 comments:

The Waddle Of The Photographer (Issue #150)

Last week, Son #1 and I watched a movie called March of the Penguins. For those of you who haven’t seen it, it’s a fascinating story about Emperor penguins which live in just about the most inhospitable place on the planet, the Antarctic.

I’ve always been fond of penguins. Their charm is irresistible. At rest, they look like bankers quietly discussing business at a funeral. Then they do that goofy side-to-side waddle and suddenly they’re clowns. (Not the scary kind with red noses and big feet.) They’re so ungainly it’s hard to believe they’re birds - until you watch them fly gracefully through the water.

The movie showed how, every year, these amazing creatures walk and/or belly-slide 70 miles (110 km) across the ice from their hunting grounds in the ocean to their breeding area inland. And they go back and forth several times, often after not having eaten for months.

As engrossing as the movie was, I found myself stepping outside it from time to time in order to marvel at the physical challenges the film crew had to overcome. Imagine filming in temperatures below -50C (-58F) with winds of over 200 kmh! Holy cow! Even a Canadian would zip up his parka in that weather.

I had an occasion to recall the movie a couple of days ago.

The previous two mornings, as BennyTheBuzzsaw and I were walking, I saw a heron patiently fishing in a tiny pond along our route. I vowed to bring my camera the next morning.

Now, I’m only half as dumb as I look. Okay, two thirds. I knew it might be problematic trying to control a berserk Jack Russell terrier with ADD while trying to get close enough to snap a pic of a heron without spooking it. But nothing ventured - nothing gained. Fortune favours the brave. In for a penny - in for a pound. Would someone please slap me?

So, I brought my camera the next morning. Sure enough, Mr. Heron was there but he was in a more distant section of the pond. My camera only has a modest 3X zoom, so I had to get quite a bit closer if I was to get a decent pic.

While I paused, considering how best to approach the bird, Benny patiently wrapped his leash around my ankles several times and reared up on his hind legs, straining to get somewhere. Anywhere.

I disentangled him and looked around. There was absolutely nothing nearby to which I could tie the leash, or anchor it down. I decided my best course of action was to pinch it between my knees and ever...so...slowly...make my way towards the heron.

I waddled stealthily. Click. Waddle. Click. How the heck did those penguins do this for 70 miles with those short little legs? Of course, none of them was walking a dog and snapping pictures. I would have noticed.

Then Benny, who up to this point was busy sniffing something, decided he had to get to the edge of the pond slightly sooner than immediately.

He surged. My knees pinched the leash as tightly as possible as I kept the camera to my eye, trying to keep the heron in view as I clicked.

My stealthy waddle became a zombie-like lurch as I flung my lower legs out to the side and then forward.

The trick was to maintain forward progress, my balance, control of the dog and the camera, while appearing unthreatening to the heron which, the occasional jiggly peek through the viewfinder told me, was no longer fishing but staring right at me for some reason.

Maybe my curses tipped him over the edge. I dunno. Anyway, the big bird took off before I could get close enough for a good shot.

I did manage a couple of mediocre pictures which appear below.

Anybody know where I might find lead boots than would fit a Jack Russell? 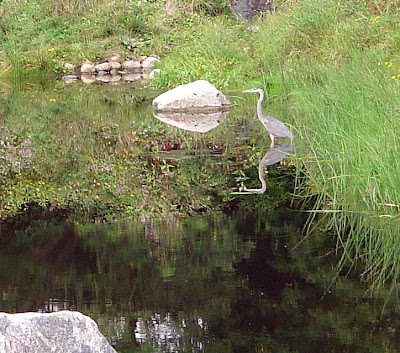 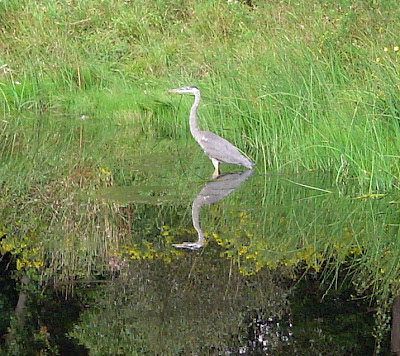 My zoom lets me sneak in for a little closer peek. 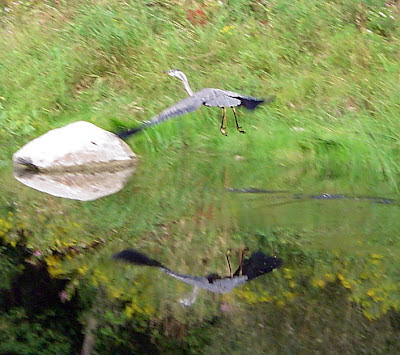 Okay, enough of this! 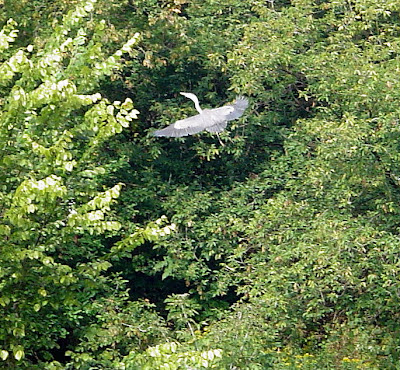 I'm mildly surprised I managed to track him at all.
---------------
150 issues is something of a milestone. Many of you have stuck with me since the first one. Most of you have hopped aboard along the way. Thanks to all. Hope you've enjoyed the ride thus far and that we still have a long way to go.

I have a way with animals. You might say I’m an animal lover. More precisely perhaps, I like to think of myself as an animal understanderer. It’s an ability that can be learned but the process doesn’t happen overnight. Most of you will recall I’m a disciple of Yogi Berra and one of his most important teachings is: "You can observe a lot just by watching."

As I do with people, I watch animals closely and try to discern from their behaviour what they’re thinking - what their likes and dislikes are. Sometimes I’m probably off base, other times I’m pretty sure I know what’s going on in their wee brains.

Someone less charitable than I might suggest that it takes a wee brain to know another wee brain. That would be an amusing thing to suggest all right. If they suggested it to me I’d pee on their leg.

I’m able to establish a rapport with most non-hostile creatures - from kittens to that nice lady at the door who frets about my eternal salvation. But I have to confess to having a wee bit of difficulty with Benny, the Jack Russell terrier pup I inherited.

I’ve had a few dogs in my life. Many of you will recall previous columns about my dearly-departed Gryphon, the hunka-hunka-burnin’-love Rottweiler. Most of my family and friends have dogs. I get along with them okay. Even my sister Theresa’s dumb-as-a-post Sheepdog.

But none of those dogs was a JRT. Therefore, none have prepared me for being a JRT caretaker.

For instance, do you know what the animal in the photo below is doing? 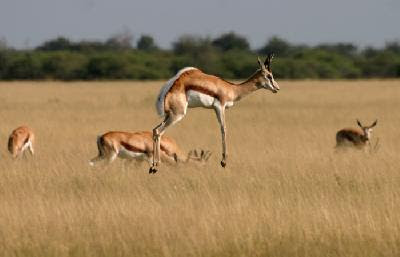 It’s called “pronking.” They jump WAY up in the air and sproing off in a new direction. It helps them escape from leopards but sometimes it seems they do it just for fun. I knew antelopes pronked because I was an avid watcher of National Geographic and Wild Kingdom.

I’m no Dr. Dolittle but I do talk with animals. I’m a firm believer that, like with foreigners, if you speak clearly and loudly, you will be understood. It just takes a little repetition, a little time, a little patience.

Benny loves going for walks. All dogs do of course. When Benny sees me put on my shoes he starts quivering and barking and running around in circles and biting my laces in order to help me along.

However, he’s holding back most of his energy because I have not yet got the leash in my hand.

We keep the leash at the top of a short set of four steps. Benny races to the top step and waits until I have the leash in my hand. Sometimes he helps by holding it for me in his teeth and not letting go. Eventually though, I have control of it.

Once he sees that I do, he proceeds to pronk.

About every second or third pronk, he misses the top step and tumbles to the bottom. No matter. He just sproings back to the top and pronks feverishly while I make futile attempts to snap the leash onto the tiny clip on his tiny collar while he’s airborne.

He misunderstands. He’s pretty sure I said, “Jump higher” and obliges.

I’d tell you about the walks themselves but I think I’ve cried enough for one day.

I confess to being a tad perplexed by this failure to communicate. In most other respects he seems to be a pretty smart dog. He just has trouble understanding me. JRTs were first bred in England which could explain it.

I need to work on my accent and then talk to him clearly and loudly. He’ll eventually get it.

Because I have a way with animals.
Posted by Frank Baron at 1:05 PM 35 comments: