Don't think I'm going to have time to post anything closer to Christmas than now. So ....

Whether it's Hanukkah, Kwanzaa, Solstice or Christmas, whatever you celebrate, I hope you do so with gusto tempered by common sense. I hope you have family and/or friends with whom you can spend some time and share some laughs. I hope there are multiple hugs in your future, that you are favoured by the smiles of children and that there's an elderly person or three in your life from whom you can learn.

I wish you a fulfilling and safe holiday season.
Posted by Frank Baron at 8:40 AM 10 comments:

I'll write more some other time but right now I'm hungry.
Posted by Frank Baron at 10:41 AM No comments:

Thought I'd try something new this year. Instead of actually shopping, I went pre-shopping today. I strolled around a giant mall with absolutely no intention of buying anything. It was liberating.

Rather than burdening myself with parcels and bags and jostling with sharp-elbowed shoppers, I ambled from store to store, making mental notes: "Oh, that fluffy steering wheel cover would be great for Son #1 if he ever gets a car. Ha! That lipstick shaped like a penis would be terrific for all the women on my list! Well, maybe not Sister Marcella at Our Lady of Peace. But if she drives she'd probably appreciate a fluffy steering wheel cover."

My mental notes included the whereabouts of each store of course. Luckily, most of the ones with spiffy stuff were on the basement floor, in a kind of darkened part of the mall, near the back loading doors. Rents were probably cheaper. Which would explain how that nifty lipstick could be sold for only 6 bucks. The stores should be pretty easy to find when I actually do decide to shop. Which will be pretty soon. I've learned my lesson. No more Dec.23rd frenzies. I'll probably conduct one more pre-shop, downtown this time, on Monday. Let's see, that would be the 18th.

Then, on the 19th, if the pre-shop hasn't taken too much out of me, I'll do all my shopping in one swell foop. If I am too pooped after the pre-shop, I'll take the 19th off to rest and tackle the stores on the 20th.

It makes sense you know. Getting the lay of the land. Saving time and energy when the crunch comes.

I'll let you know how it all works out.
Posted by Frank Baron at 2:41 PM 6 comments:

I've been a huge Van fan since the early 60s when he was the lead singer and front man for the band Them. I don't know of another singer with the talent to not only write terrific songs but to interpret others' so wonderfully. To listen to his music over the decades is to explore popular music itself - from R&B to pure blues, to jazz, to soul to country. Van can take a song and make it his own while still remaining faithful to the spirit of the original.

For 30-some years now my answer to the question, "What one record would you take with you if stranded on a desert island?" has remained the same: Van's 1974 double-live album It's Too Late To Stop Now.

If you've never heard it you're in for a treat. Go buy it. Right now. I'll wait.

When you have a quiet couple of hours to yourself, pour your favourite belly-warmer and put on the first side. Listen to them in order. You'll hear familiar songs that you've never heard before.

And the previous sentence will make sense.

What brought this particular musing to the fore was my recent discovery of a blog devoted to Van and his music. The blogger, John Gilligan, has dug up news, information and best of all, video clips, of Van over the years. I was sorry to read some of the stories that indicate Van can be a rather unpleasant person. Over the years I'd learned he could be a difficult interview, prickly and unwilling to open up but wanted to believe that he was just shy. Apparently there's more to it than that.

What matters to me though, and his many fans, is the music. Van has always been about the music.

Go visit Mr. Gilligan's blog and see/hear for yourself.
Posted by Frank Baron at 9:37 AM 4 comments:

Readers of my column will recall Nat, 11-year-old nephew of Times of London writer James Doran. We were asked, through James, to keep Nat in our thoughts and prayers as he battled Osteosarcoma, a particularly nasty cancer. Sadly, Nat didn't win the war. Below is the mail I received from James, posted with his permission. (Thanks to Hilary for sharpening and resizing the photos.)

I enjoyed reading your column about charity today. A lovely little vignette. But I write with sad news. Nat died a couple of months back. I have almost written to tell you a few times, but each time I procrastinated. It's a hard letter to write, I'm sure you understand.

Osteosarcoma is a tough one to beat. The doctors and the collective consciousness of Nat, the family, and the thousands of friends we all made through him, beat the cancer in his leg. It was too much for his little lungs though.

I wanted to thank you and your many readers who gave Nat encouragement and good wishes during his fight. You all taught him and me a very important lesson. Kindness and love are the most powerful forces in the universe. Only through them can life have meaning. Nat learned this important fact in his short life because of the kindness and love of so many people. Because of you, and the many others like you, he looked upon the world and everyone he encountered in it with equal amounts of both.

On behalf of Nat, thank you all for such a generous gift.

We held a wonderful service at the Demelza House Hospice, which is in a beautiful Kentish village called Sittingbourne. You can read about Demelza and make a donation here.

Teachers, school friends, hospital chums, aunts, uncles, mums and dads got up to speak. For a boy of 11 there were so many hilarious stories to tell. It was a joyous memorial.

I wrote a short eulogy and a poem, which I read with the help of my wife Alida – we got married just last month. If you would like to share them, and this letter, with your readers please feel free. I'm a reporter and no kind of poet, but thought it might give those who have read about Nat in your columns a glimpse of him they might otherwise not have seen.

I have also attached a couple of photos I took of Nat in his last weeks at home. His lovely red hair grew back all curly once he stopped the chemo. It was straight before! My favourite picture shows him doing what he liked to do best – simultaneously sorting his YuGiOh cards and playing Nintendo on the couch. The pics look very grainy because I have not yet mastered the use of my scanner. Feel free to post them too.

All the best Frank,

I was pushing Nat on the swings down at Rye one afternoon a few years ago and for some reason I asked him what he wanted to be when he grew up. Grown ups can ask the most boring questions sometimes. He didn't think so, though, and replied in a flash: "A professor".

He was only three years old.

So with that unique and often hilarious aspect of Nat's life in mind, I wrote a poem, which I will first explain.

In the Universe there are stars that burn with such intensity that they cannot be contained. An Indian mathematician and astrophysicist named Chandrasekhar worked out that when a star burned at a certain rate much greater than our Sun it would lose containment and fold in upon itself leaving behind a pinpoint of light so immensely bright that it seems to us on earth visible for eternity.

This poem is about that phenomenon, and it is dedicated to Nat, who, like Chandrasekhar was an inspired mathematician.

For us there should be always just one more turn around the floor.
If only you would fall back into these arms my love,
You wished to the stars.
For a moment as a lash touched your cheek,
A star pulsed its brightest
Last light that will be for eternity.

A life does not expand to fill the time it should be allowed.
Instead it folds back on itself, restricted from flight,
Like a paper crane.
It is not diminished by this lack,
But becomes a singular beauty
One that it and nothing else can become.

Physicists call this cruelty the Chandrasekhar limit.
When a star burns 1.4 times brighter than the sun,
It must find a new form
And we must look for its light
In the farthest reaches of the Universe. 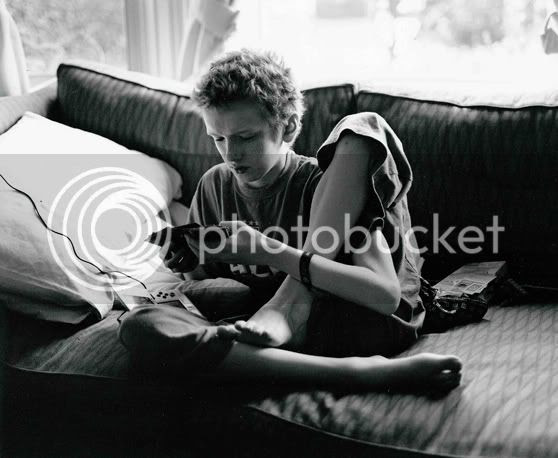 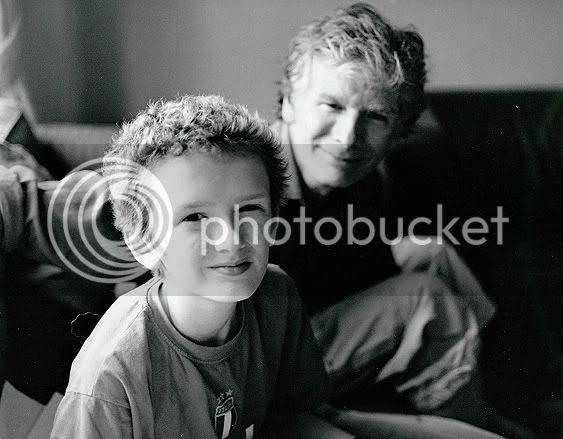 Nat and his dad, Chris.

God bless Nat. There's no greater pain than losing a child. May Mom, Dad, family and friends find the strength and faith they need to bear this burden.
Posted by Frank Baron at 8:24 AM No comments:

I was working on a story and mentioned within it an uncle who wasn't really an uncle. He was unrelated to the family but was a close friend of my father's. We referred to him as "Uncle" and his wife as "Aunt." We also had within our family some distant cousins, 2nd or 3rd or even further removed, whom we referred to as Aunt or Uncle.

I was wondering if bestowing familial honorifics was a common practice within many other cultures. I come from an Eastern European (Ukrainian) background. I know that in some Asian cultures it is (or at least was) polite to refer to elders, even strangers, as "Uncle" or "Grandmother."

My own sons refer to my best friend and his wife as Uncle Mike and Aunt Virginia. I like the idea of conferring honourary uncleships and auntships to special friends. It carries the respect of a "Mr." or "Mrs." or "Sir" but with a special, affectionate component.

Any honourary aunts, uncles or grandparents in your family?
Posted by Frank Baron at 11:06 AM 7 comments: