Well folks, we’re not just peeking over our shoulder at a year slipping into the past but a whole darn decade.

Dang. You know you’re getting old when decades whisk by like seasons used to.

It’s been a remarkable one for a host of reasons, led by two numbers which came to represent a new, world-wide reality: 9/11.

~ The election of a mixed-race man to the office of President of the United States was certainly a notable event. (More’s the pity.) Surely, it will hasten the day when race, gender and sexual orientation play no part in deciding who is fit to lead a nation.

~ It was a decade in which global terrorism both helped and hindered the spread of tolerance. It subjected many innocent Muslims and people of Mid-Eastern descent to uncomfortable scrutiny and even outright bigotry. At the same time, identifying a small minority of fanatics who pose a real danger to the world helped put into a more realistic perspective the “threat” posed by such horrors as gay marriage and female clergy.

~ Personally, my path took many turns. It was a tumultuous time, featuring the death of my wife, the closing of my business, my Stupid Heart Attack, the publication of my book and the arrival in my life of Hilary and Benny. (There were other high and low-lights but I’ll leave their recounting to my Boswell.)

~ There were many falls from grace. Tiger Woods’ belly flop probably came from the loftiest height. It’ll take a goodly chunk of Tiger’s money to try to knit together the tatters of his reputation. Serves him right. He was a twit.

~ But I have to award the Twit of the Year to Michael Vick. (Background for those unfamiliar with him: He was a multi-million dollar quarterback in the NFL who served 18 months in prison for running a dog fighting ring. His treatment of the dogs was horrifying, killing those who lost by drowning or electrocuting them. After serving his time, he was allowed back into the NFL and is poised to re-make millions of dollars.)

Vick is not my choice because he’s an asswipe who tortured dogs. He’s my choice because, upon receiving an award from his teammates, he had the gall to say: “I've overcome a lot, more than probably one single individual can handle or bear.”

He doesn’t get it.

18 months in prison plus a million-dollar contract (and an option for $5.2 million next year) does not add up to overcoming more than a single individual can bear!

I think he needs to talk to parents who’ve buried children or children whose Daddy isn’t coming home from Afghanistan or maimed soldiers who left body parts on foreign soil.

But I suspect even then he wouldn’t get it. Which is what makes Michael Vick a major league twit.

~ What’s in store for 2010 and beyond? I dunno but I’m sure it will be interesting. My hope is that we remain, or get healthy, and find fulfillment in what we do and who we are.

I’ll leave you with a YouTube video of my favourite song of the year. This clip is a live version from the Letterman show. On my computer, it's very slightly out of sync but that doesn't detract from the performance too much. Hope you enjoy.

Thank you frailty
Thank you consequence
Thank you thank you silence

I suppose we’re a tad past the traditional season of thanksgiving but I’m feeling it this Christmas. Got to thinking about all the people, places and things that enriched my life over the years. And I don’t mean the obvious ones. This isn’t going to be about my loved ones, friends and family. I always hold them dear and trust they know so.

No, I’m talking about a few of those souls who have no idea they’ve brightened my days and lightened my load.

- Folks like Jerry Howarth, who calls the Toronto Blue Jays baseball games on radio and does a fine job. Jerry paints a verbal picture without unnecessary embellishment - letting the sounds of rawhide and wood and leather-lunged umpires tell half the story. His new side-kick, ex-catcher Alan Ashby, knows the inside game well, and is a fine communicator in his own right. There’s way worse ways to while away a fine, summer afternoon than listening to Jerry and Alan call a ball game.

- I wish I could thank every person who’s bought my book. They number in the many thousands now and have kept it in print for going-on six years. It’s quite remarkable really, because I’m a publisher’s PR nightmare. I refused to do book signings or radio or tv or print interviews. I sure appreciate every reader, most especially those who contacted me afterwards.

- I’m grateful to Mother Nature. I’m writing this on winter solstice night, the longest darkness of the year on my part of the planet. I anticipate the coming, gradually-lengthening days. Without darkness, we’d never appreciate light. MN has innumerable goodies in her basket that deserve gratitude. To list them all would take much more than a blog post. But here’s a handful: storms, rainbows, dragonflies, sunsets, trout, trees and dogs.

- Many actors have moved me with their performances and I could rhapsodize about a couple of dozen. But today I’ll focus on one: Susan Sarandon. I fell a little bit in love with her in 1970's Joe. And a little more in 1975's Rocky Horror Picture Show. I realized it wasn’t just a passing fancy with 1980's Atlantic City and 1988's Bull Durham. As the years passed, and we continued to never meet, I gradually came to understand that there would be no little Barondon babies. So, I gallantly stepped aside and gave that Tim Robbins guy a clear playing field. Ms Sarandon should  be declared a cinematic treasure. I can’t think of another actress today with a comparable body of work (that’s not what I mean!) encompassing 40 years. She elevates whatever movie she’s in and is still undeniably sexy in her 60s.

- As with actors, there are dozens, nay, hundreds of musicians and other artists who have spiffed up my life. One who gets little air time on this side of the pond is Britain’s Chris Rea, one of the finest slide guitarists these ears have ever heard. For over 30 years, he’s been playing blues, rock and a little jazz. A few years ago, he was dangerously ill and survived a tricky operation. He promised that if he lived, he’d devote himself to the music he loved best - the blues. The blues are my favourite genre, so I’m doubly happy he’s well again.

- I’m grateful for the everyday pleasantries exchanged with store clerks, cashiers, gas station attendants and the three Karens who work at my bank. For quite a few years, if not for them, I might have gone weeks without an adult conversation.

- Lastly but not leastly, I’m deeply appreciative of you folks for reading my emailed, and now blogged, scribblings. Over the six-plus years, I’ve been made to feel like a member of many families.

Here's a little taste of Chris Rea's music. Gaunt and haggard-looking from his illness, he shows he's still got the right stuff:

Some of you know I spent a goodly portion of my life working in a retail furniture store. One of my favourite aspects of the job was dealing with wood. I loved unpacking a new shipment of oak, ash, maple, cherry, mahogany or birch coffee tables, dining tables or bedroom suites. I love the smell of raw wood and the look and touch of smooth, shiny finished pieces.

What follows are some pictures I've taken over the last couple of months of wood in various forms. (If you wish to see them larger, click on them once. Some will expand even more if you click a second time. To return to the post, click your "back" button.) 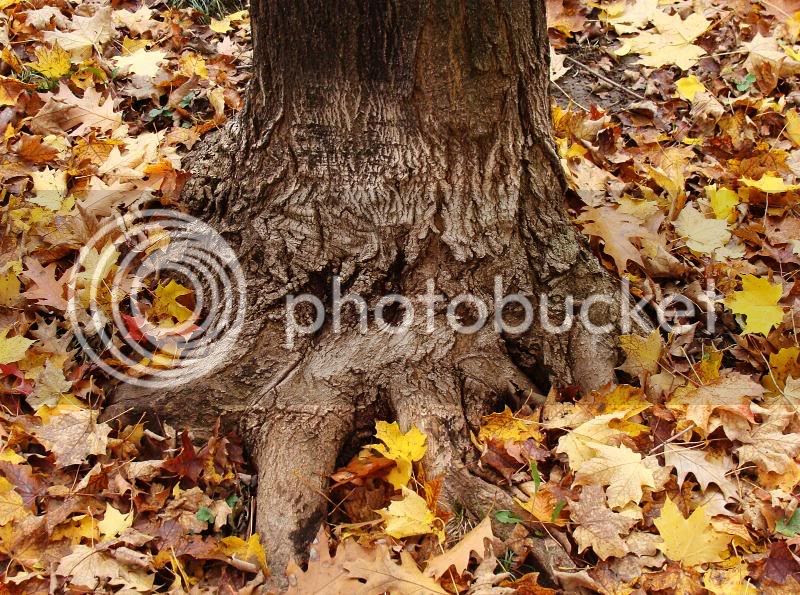 Stumps and roots are like fire, in that one can stare at them and see...things.... 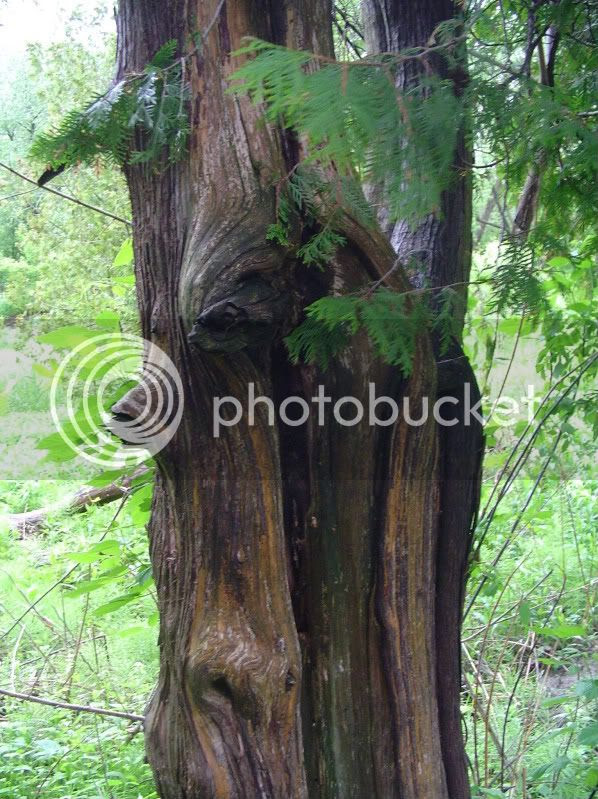 Other...things...might be seen in  tree trunks. 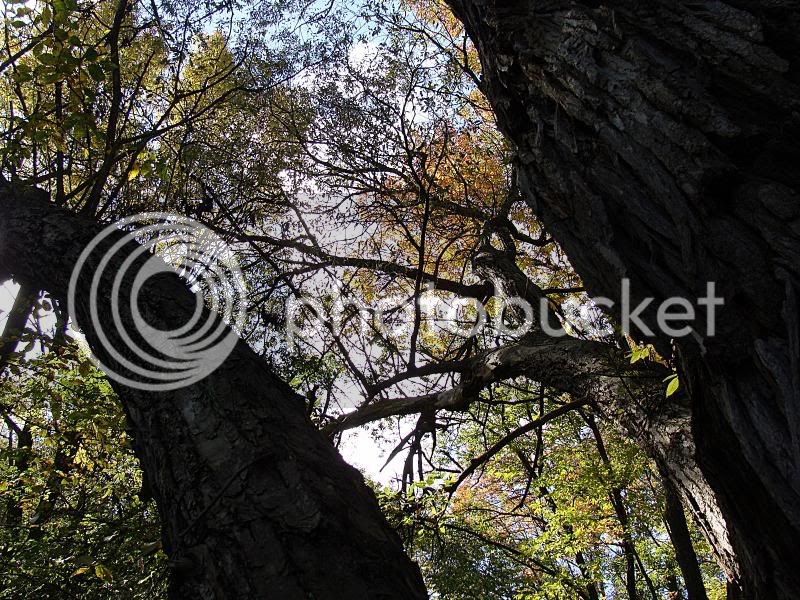 The true majesty of trees can only be appreciated by looking up. 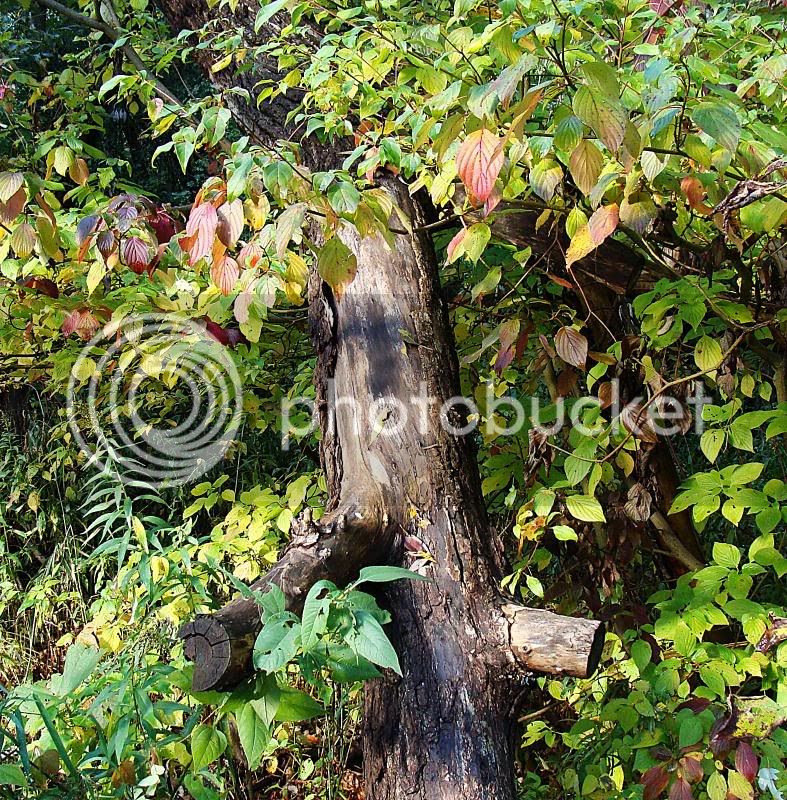 This upright, elongated stump with its amputated limbs still harbours life. It provides support for surrounding bushes and plants as well as food for insects, which in turn keep birds and other critters nourished. 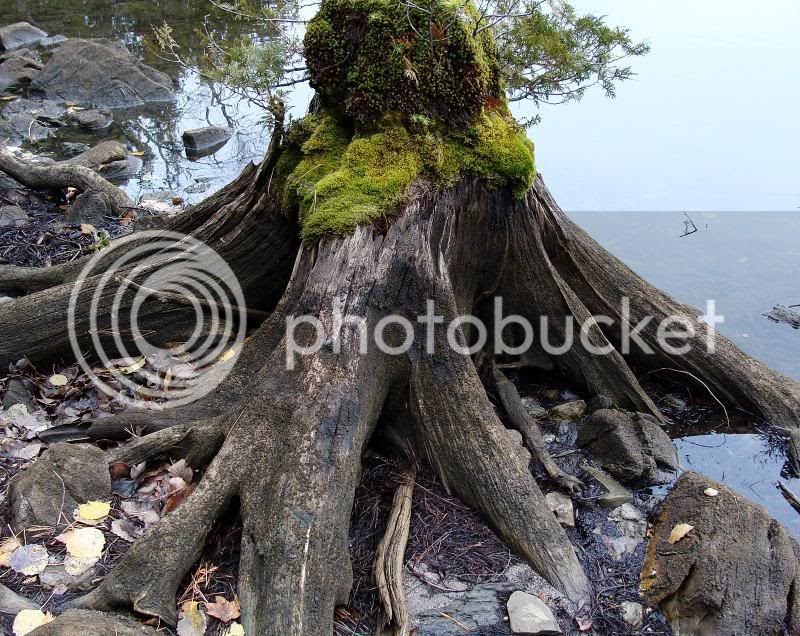 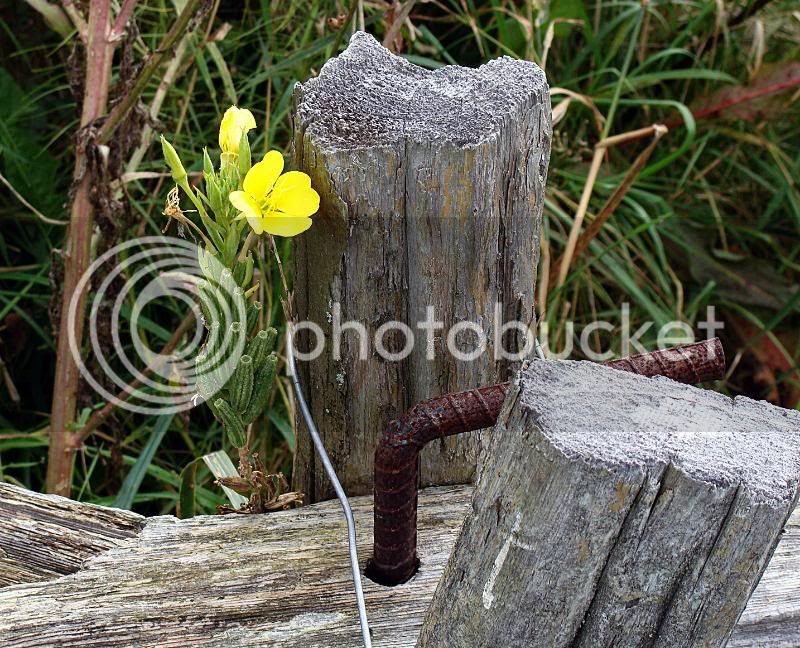 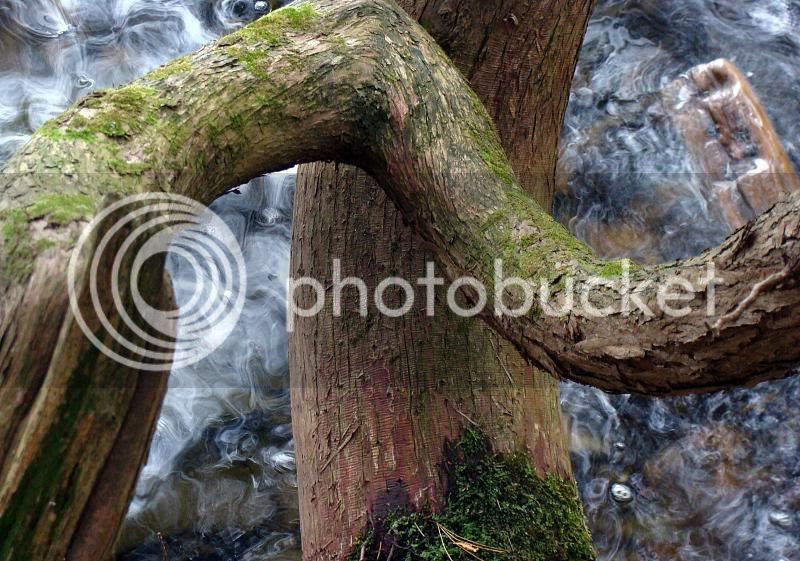 This is one of my favourite shots. I like how the moving water at the shoreline has taken on a metallic sheen. And I never cease to be amazed at the lengths (and bends!) some trees, especially cedars, will take in the course of seeking light. 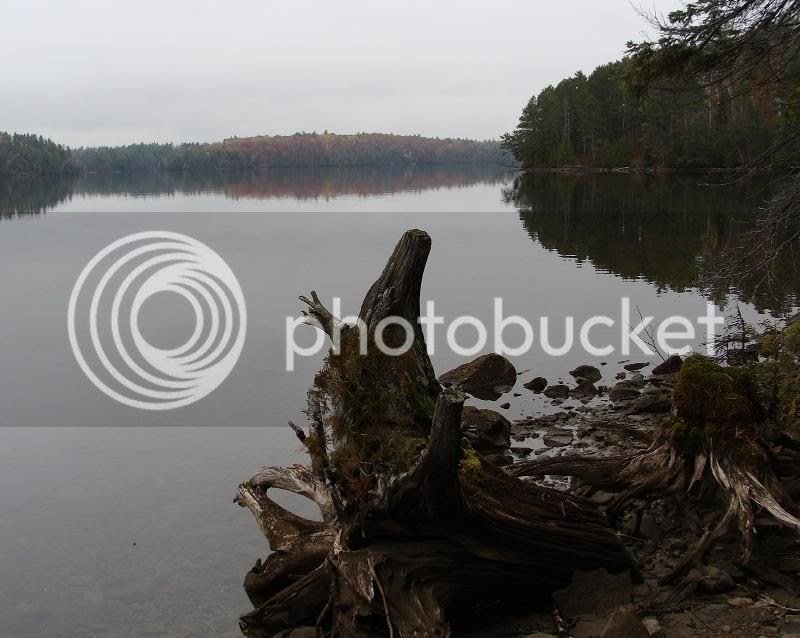 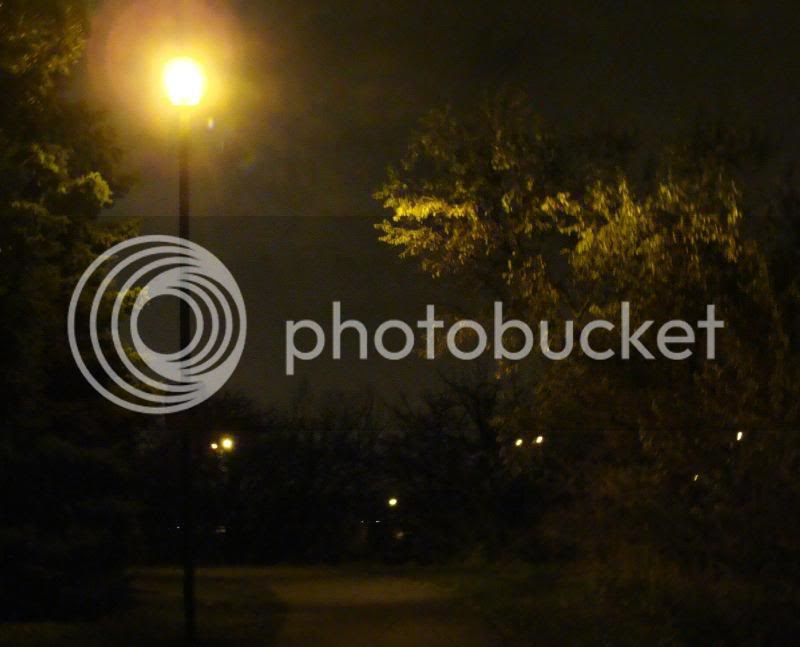 The end of a evening's walk at the park near Hilary's place. If you're very, very quiet, you might hear trees whisper to each other after dark.
Posted by Frank Baron at 12:27 PM 25 comments:

I got a new camera a couple of months ago. I wanted something small that would offer a better zoom feature than my old digital. I found one at The Source (which, in the States is still called Radio Shack, I think).

It's a Sony, like my old one, but offered many, many more features - even though it was last year's model. Because of that latter fact, it was on sale for less than $200. (If you're in the market, you might still find one. It's the Cybershot DSC-H10. It has 8.1 megapixels, a nice wide-angle lens, 10X optical zoom, a macro feature, makes HD videos and fits in a pocket.)

Anyhow, as most of you well know, I'm a techno dweeb and avoided uploading pictures from the new camera because then I'd be forced to deal with new software. Probably.

I finally bit the bullet and have spent the better part of the last three days sorting through almost 600 photos. Probably about 10% are worth sharing. (And I did indeed have to wrassle with new software.)

Don't panic! I'm not going to inflict 60-some pics on you in one swell foop. Nosirree Bob. I'll divide them up into bite-sized posts.

Here in southern Ontario we've enjoyed the first November in over 100 years without snow. But the days grow inevitably grayer and colder.

Here's a fond, pictorial farewell to autumn's golden light. (Click on each if you'd like to see them bigger.) 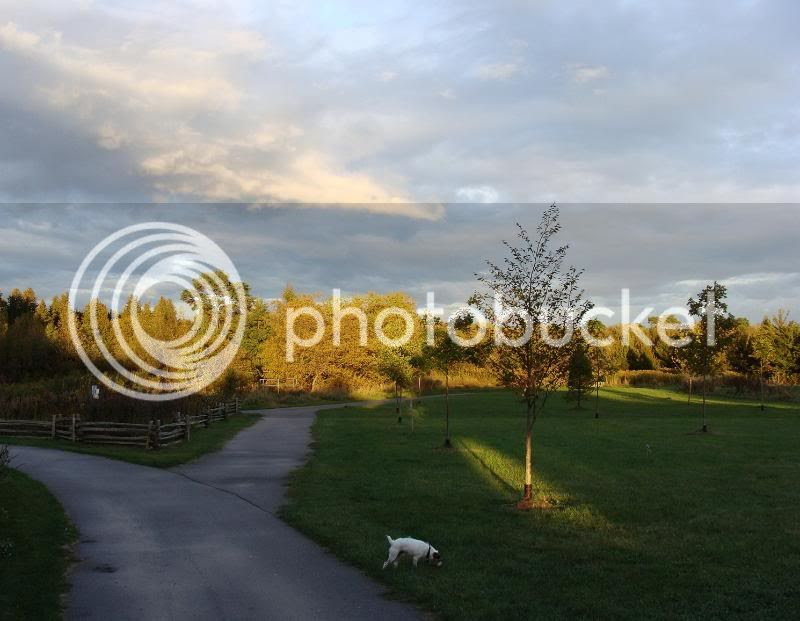 Some of you may recall my column/post about the Commemorative Forest. Well, that's it there on the right. The forest is now about 12 trees strong. Ish. Nice light across the creek though eh? 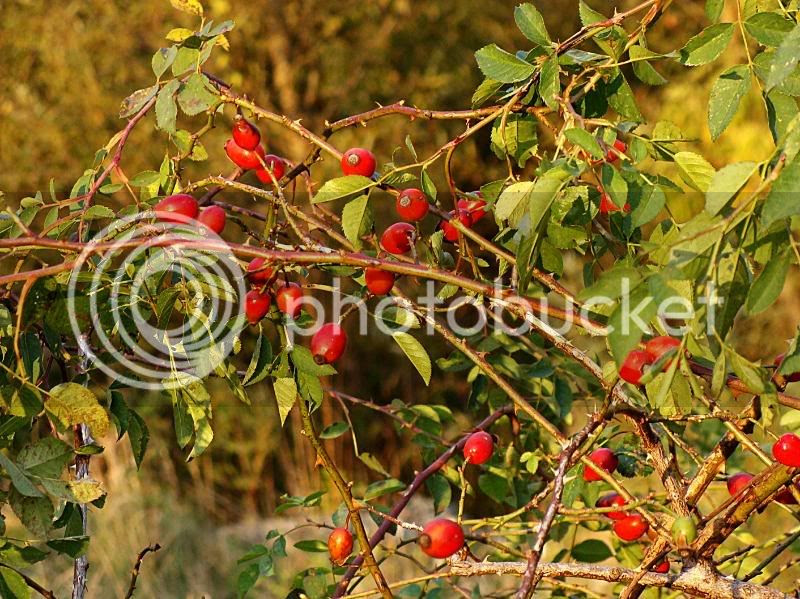 The wild rose's red hips are brighter than its blossoms were. 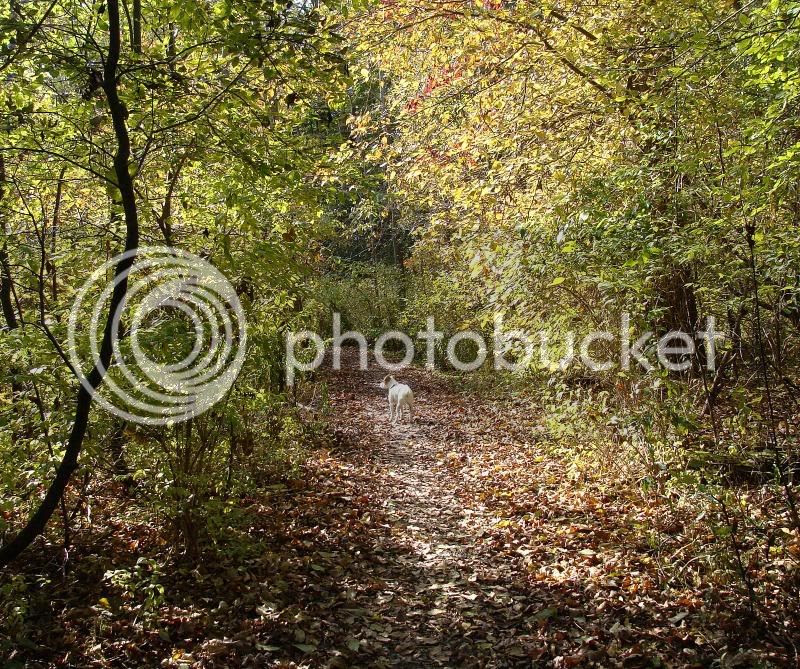 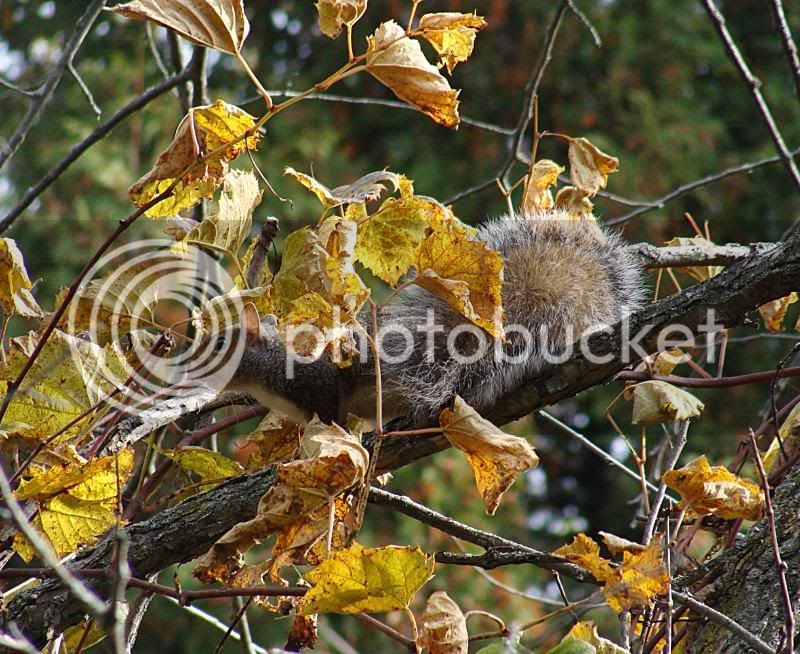 The squirrels have been extremely active for the last two months, storing and stashing food for the winter. This grey has made good use of the peanuts I leave in his neck of the woods. 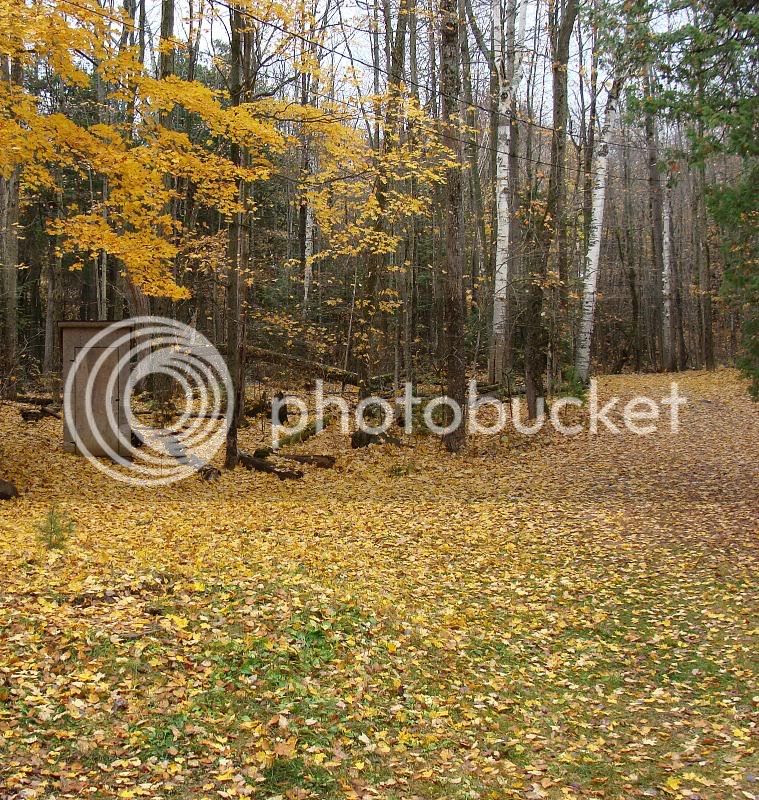 I posted a similar photo of the cottage outhouse a year or two ago. I'm pretending I've had requests to see another. 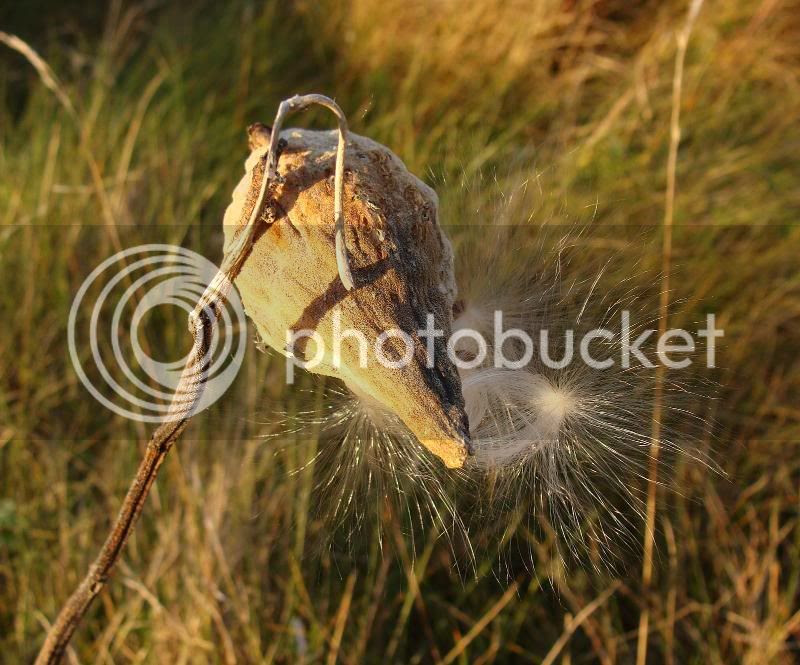 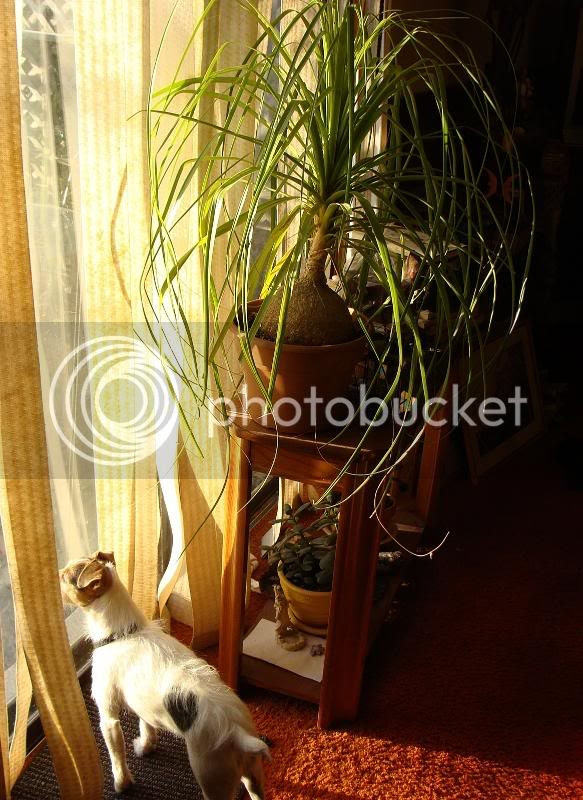 It's not hard to imagine the plant enjoying the rays of the setting sun. Ben, ever vigilant, is much too absorbed to notice. The yard MUST remain free of squirrels. 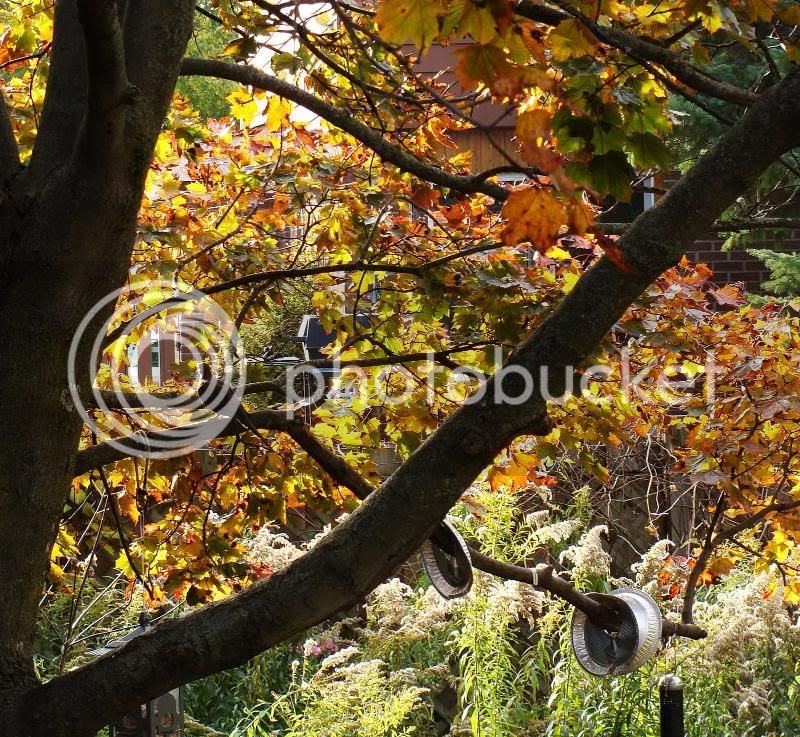 It's this tree, and its immediate environs in our backyard, that Ben watches so keenly. For a time, even mourning doves, like the one roosting here in an upper branch, were sworn enemies. Now, he pretty much specializes in squirrels. By the way, those pie plates? They are yours truly's Anti-Squirrel Devices, designed to keep the bird feeder free of their thievery.

They worked for about an hour and a half. 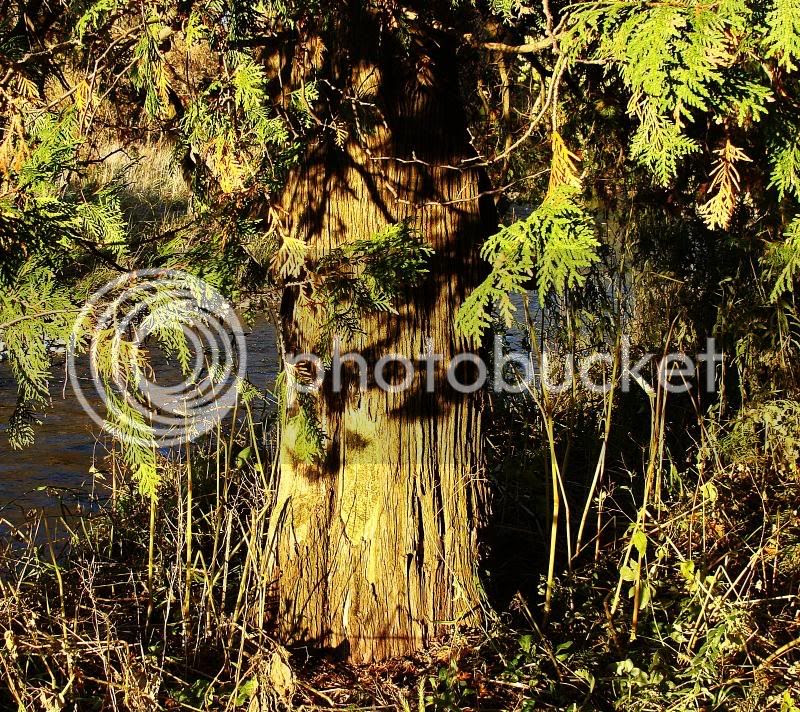 I flat-out love cedar trees. There. I said it. I've outed myself.