“Your blog looks really old and tired.” Hilary’s voice was flat, matter-of-fact. “Then again, I suppose-”

“I know what you’re going to say.”

“Very funny. So funny, I forgot to laugh.”

She’s not the only one who can deliver a zinger.

“How the heck can something as newfangled as blogging be ‘old and tired?’ I mean, computers have only been around for a few years and blogging for what - maybe five or six? Wringer washing machines now - they’re old and tired-looking. If I had a wringer washing machine, I’d probably invest in a new one. Almost for sure. People have had their entire arms crushed by those things. Right up to the shoulder. They should be banned.”

But she would not be sidetracked.

“If you switch to the new format, which, by the way, is no longer really new because EVERYONE else switched two years ago, you can choose from a huge variety of looks and it’s easy to do things like incorporate your own banner and personalize the appearance. Plus there’s new tools to make the whole blogging process less of a pain.”

“How much they pay you to shill for them?”

That earned me The Look.

(An aside for guys only. You womenfolk skip this bit. No, seriously, skip this paragraph. Brad Pitt is in the next one. Honest. Go look...Okay, they’re gone. All guys know, and many fear, The Look. It is disdainful and meant to wither. The trick is to not make eye contact. Just look at her nose and you’ll be fine. To be on the safe side, I always only ever look at Hilary’s nose, no matter what’s being discussed.) 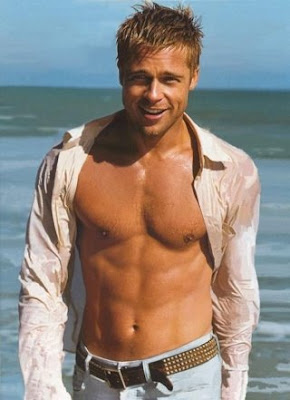 Anyway, that’s pretty much how the conversation went a few months ago. As those of you who’ve been reading me for a while know - I don’t deal well with change. There’s a certain wrongness about change and I think I’ve figured out what it is: It’s different. And things that are different usually means there’s some learning to do. And learning is hard. Like Math.

So, I’ve been mulling this whole blog spiffication thing for several weeks now. The thing is, as I understand it, it’s like parachuting. Once you push the Blog Change Button, you’re committed. You’ve jumped off the plane and whoa buddy - that pull cord better work as advertised! It’s conceivable that every blog post I’ve ever made, every picture I’ve ever posted, will be lost in one of the Interweb’s notorious Black Holes, never to be seen again.

But what the heck, I’m gonna do it.

Not immediately, of course. Musn’t be hasty. No good ever came from rushing. No, I’ll do it in time for my next blolum, which, for those of you keeping score at home, will be #200. Surely a bicentennial needs to be marked in some special manner.

So, in a week, or two, or three, you folks will be able to see a new, improved, ultra-spiffified blog.

Or a big black hole. Which, of course, would be Hilary's fault.
Posted by Frank Baron at 2:24 PM 33 comments: