To the surprise of a few of you (perhaps) I'm something of an armchair jock.

"But Frank," you protest, "you are classy and erudite. I've seen you lower your head when picking your nose in a restaurant. And when your eyebrows needs smoothing, you barely lick your fingers first!"

Yes, it's true. It's kinda like leading a double life. By day, I am a suave sophisticate. By night, I holler at my tv, spraying bits of popcorn, gesticulating with the remote-wielding hand while the other is jammed into the waistband of my pants. (Don't ask what it's doing there. It's a sports-guy thing and you wouldn't understand. But it has nothing to do with feelings of inadequacy. Really.)

This time of year, May-June, and then again in October, is nuts for this particular AJ. Baseball is well under way and basketball and hockey are into their playoffs. There's something, usually an important something, and often several important somethings, on tv every single night from about 7pm - 2am. It'll get a little less hectic as the playoffs wind down and fewer teams are left to compete for their championships (and my time).

In the summer, there's only baseball, maybe a smidge of soccer and a cursory peek or two at Canadian football. But come October, the baseball playoffs are on while hockey and basketball begin their seasons anew.

I'm not much of an NFL fan, so I check on my sons' wellbeing on Sunday afternoons from November through April.

This scenario is all too common:

W-B Writer opens his email one morning. There is a message there from someone he's never heard of. OMG! It's a publisher! It says so right there in the email! It's Marie and she represents Lee Chew Publishing of Fleece Street! And she's interested in W-B's deathless prose which she heard is brilliant!

All W-B has to do to start his literary ascension is send his first three chapters and a small processing/reading/editorial/gullibility-testing fee and he'll be on his way!

I read about this scenario, or one very much like it, on a near-daily basis. I read about it on writing-related message boards which abound on the net.

That's where Lee Chew Publishing "heard" about you too. You posted about your ambitions and your email is in your profile.

If someone you've never heard of approaches you with promises in exchange for money, do what you'd do if some seedy-looking guy offered you a Gen-U-Wine Rolex for 10 bucks. Walk away. Keep your wallet in your pocket.

Real publishers and agents don't go trolling for talent on bulletin boards. They're far too busy fielding queries and reading manuscripts from writers who realize how the game is played.

It's played without shortcuts. It's played by a fairly well-established set of rules (that can occasionally be bent but rarely broken).

1- Write something other people will want to read.

2- Research legitimate agents/publishers. Legitimate agents will provide a client list and be happy to talk up their deals. Legitimate publishers have books in bookstores and libraries. Neither will ask you for money to read and assess your book's merits. If accepted, agents (at least 90% of them) won't ask for money until they've sold your book. Then they'll take a percentage. If you deal directly with a publisher, the only money talked about will be your advance and royalties.

3- Draft a dynamic query letter and/or proposal and send it to those agents and/or publishers in batches of five or so. (Doing it in batches allows you to fine-tune the query if the initial one fails to spark interest. That way, you haven't already had a hundred doors closed to you.)

4- As author and writing guru James D. Macdonald wisely recommends - while waiting to hear back, start working on another, better book.

If you simply MUST give someone your money, stuff some in a nearby church's poor box. Don't feed the sharks.
Posted by Frank Baron at 1:37 PM 15 comments:

Would you eat Bambi?

Had an animated discussion a while ago with a friend about eating game - game, as in duck, rabbit, deer etc. that had been killed in the wild.

He was uncomfortable with the notion and said he would only eat it if he had to, to keep from starving. He does not feel the same way about fish, only mammals.

I suspect he has quite a bit of company. I think it’s an example of the Disneyfication of wildlife. Nobody wants to eat something that has done cute things on a movie or tv screen. Even if that something is a cartoon. Organizations like PETA, for all their stridency and media-grabbing stunts, can’t hold a candle to Bambi when it comes to turning people off from hunting and/or eating game.

My friend didn’t want to eat domesticated game either. A farm-raised duck was just as unpalatable to him as the ones he tossed bits of bread to at a nearby pond. I think he, like a large segment of the population, prefers to think that last night’s supper mysteriously appeared on a Styrofoam tray in the meat department of the grocery after an Immaculate Dissection.

I think it’s safe to say that most people don’t like to think about living cows and pigs being turned into hamburgers and chops. They’d druther not know about abbatoirs and killing floors. I can’t really blame them. They’re very unpleasant places.

Although I no longer hunt game, I am certainly not opposed to the process. And I wouldn’t turn down an offer of some venison or a brace of ducks. And if I had a choice between dying suddenly, while grazing in a field, or in a slaughterhouse, after hours of horrible stress, it would be a no-brainer.

What do you think? Do you eat meat? Do you, would you, eat game? Is fish okay but not venison? I’d love to know your thoughts.
Posted by Frank Baron at 10:36 AM 27 comments:

Come fishing with me

It's a lovely day. A bit of ice still clings to the banks of the creek but the sun is shining and it's a few degrees above freezing. Hopefully, we'll make the acquaintance of a rainbow trout (steelhead) or two. Some have already been upstream and spawned but most are on their way.

This area is only a couple of miles from my house. It's a slow, meandering stretch of creek that threads it's way through a tangle of hoary old willow trees, into an open, marshy area with a marina and condominiums, before emptying into Lake Ontario. There is a lot of birdlife in the area, primarily Canada geese, ducks of many species, swans, hawks and gulls. 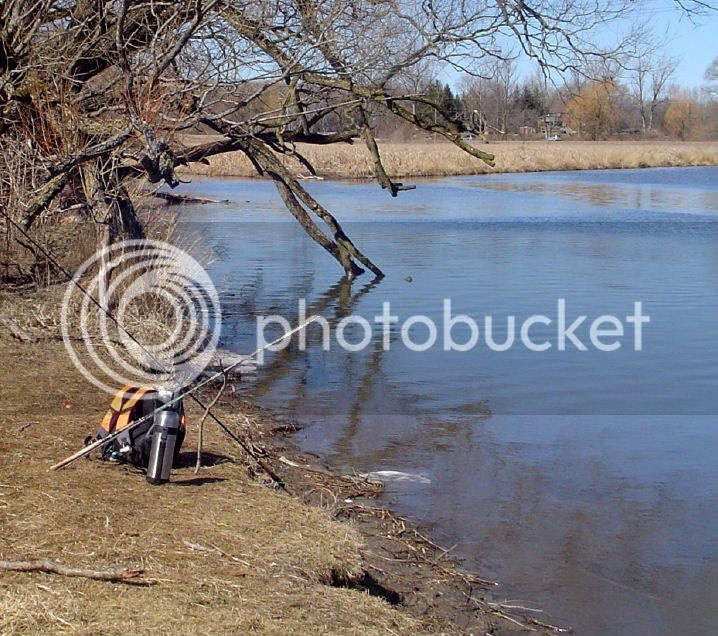 Today I'm fishing at my 2nd-favourite spot. If you look at the pic, you'll see it's at the confluence of two creeks. The intermingling of scents give fish pause while they decide which one they'll enter. While they're pondering, I like to offer them something to eat.

I see no signs at all of fish movement. Luckily, other happenings divert my attention. 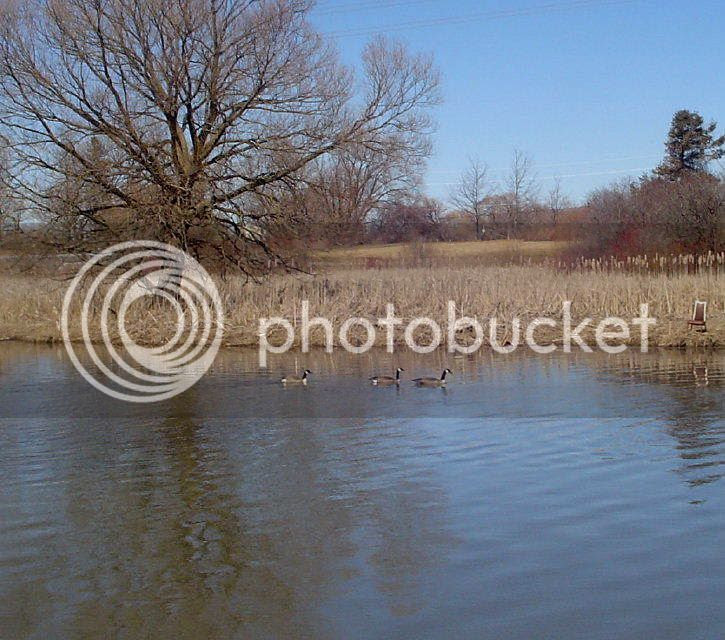 Three geese wander by. Yes, that's a chair on the opposite bank for the convenience of a weary angler. 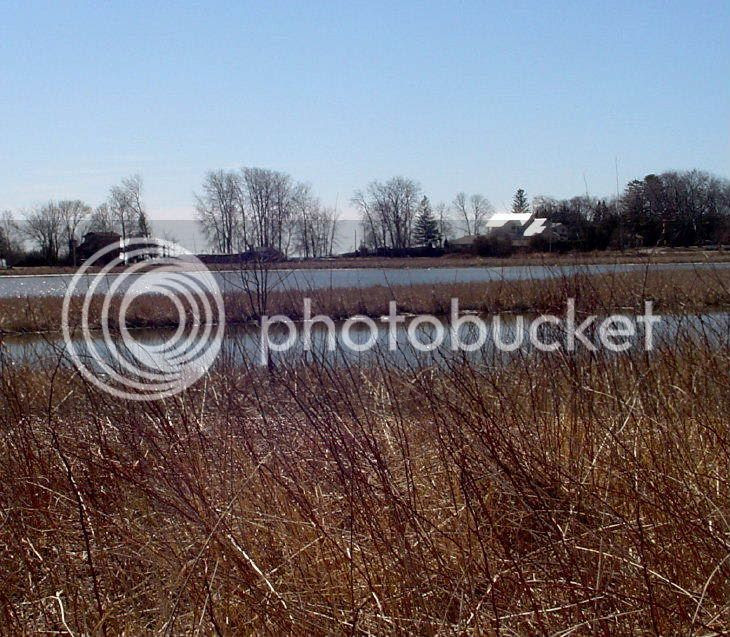 Behind where I'm fishing is a marshy area which teems with birdlife at times. It's a favoured nesting area for ducks, geese, swans and redwing blackbirds. 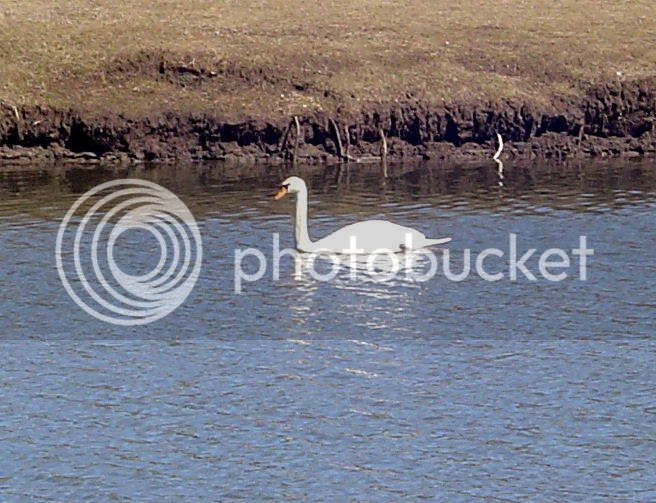 Speaking of swans.... Can't really tell from the photo but these guys can really scoot. They often leave a wake when paddling. 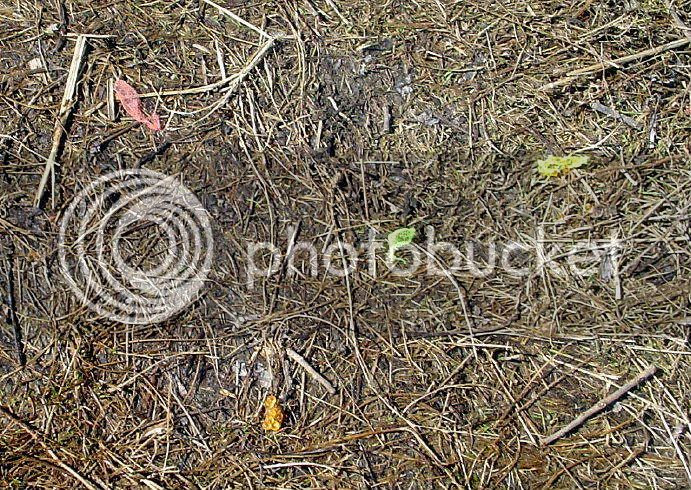 "What the heck is this?" you ask. Well, it's some of the leavings from previous anglers. The pink, green and yellow bits near the top are torn pieces of light mesh which once held a few fish eggs (the gold/amber blob near the bottom) in dime-sized sacks/snacks. Trout and other salmonids like eating eggs that drift downstream from spawning couples. So anglers use eggs for bait. 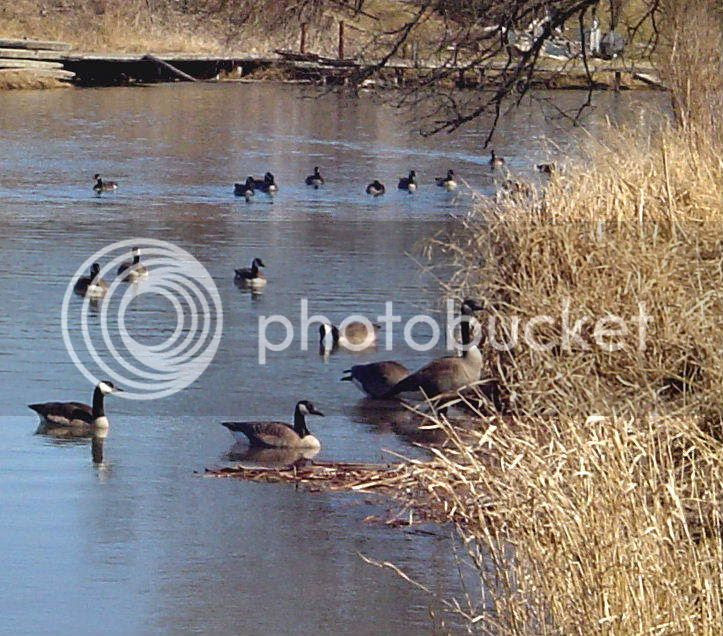 The gander taking a gander on the right held that pose for a good 10 minutes. He was listening to another goose calling from the marsh behind me and, I'm sure, prepping himself for battle if the need arose. He spent a goodly chunk of the day harassing other males who came too near his lady friends.
What was it we were doing here again?
Oh yeah.
After four+ hours of fruitless drifting with roe, flies and artificials, I hooked on a small worm. On the 3rd pass my float dipped and stayed down. I set the hook and felt a sluggish resistance. "Sucker" I thought. I didn't mind. Homely suckers provide at least a bit of excitement. This one felt fairly heavy, perhaps four pounds or so.
A minute later, as I worked the fish closer I caught a glimpse of silver.
Suckers are bronze.
Woohoo! A minute or so later, I eased a nice, dinner-sized rainbow (about 2 1/2 lbs) out of the water. 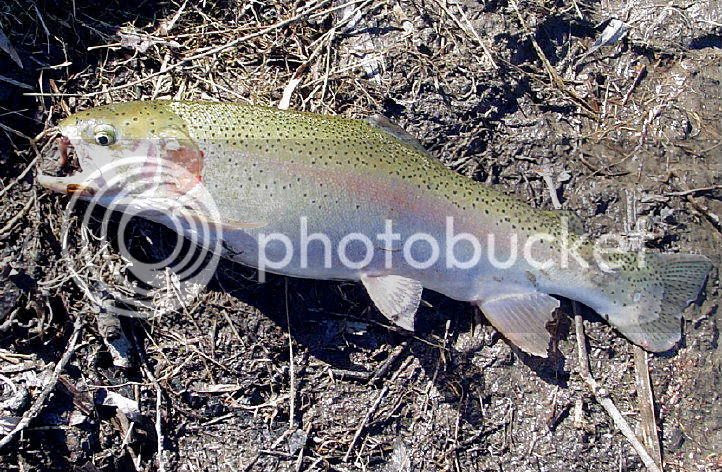 Edited to add: Q sent me a link which is cute and relates to this post - sorta. Click the end of this sentence, wait a minute or two and you'll see the fish's revenge.
Posted by Frank Baron at 3:08 PM 22 comments:

I love animals too but...

HYDERABAD, India (Reuters) - Unable to come to terms with the death of their pet dog, an elderly couple in southern India committed suicide by hanging themselves, police said on Monday.

The bodies of 67-year-old retired soldier C.N. Madanraj and his wife, Tarabai, 63, were found on Sunday in their home in a suburb of Hyderabad.

Police said the childless couple had held a burial ceremony for their dog of 13 years, called "Puppy," and hosted a feast for friends before hanging themselves in their bedroom.

"The couple described the grief over their pet dog in the suicide note they left on March 29," said police inspector V. Anantaiah.