As you folks are no doubt darn sick and tired of hearing, I’ve spent a lot of time at the cottage this summer. (And I’m going up again in a couple of days! Nyaa-nyaa!)

When I was a youngster, well before my folks built our current cottage, I loved spending chunks of the summer at my cousins’ cottages. Two of my aunts and uncles built adjoining cottages on a lake only 45 minutes from where we lived. I had loads of fun there, fishing, swimming (nearly drowning) and playing with my cousins.

As it was for me back then, for Sons #1 and #2 a large part of the allure of the current cottage was the chance to spend time with their cousins. Each of my five sibs has at least a couple of rug rats of their own and the age groups mesh reasonably well. Chances were, if we were sharing the cottage time with one or two other families, they’d have playmates with whom to swim, explore and get into trouble.

Now, my sons are in their 20s, as are most of their cousins. What with jobs, girlfriends, boyfriends and busier lives, they don’t get together at the cottage as often.

Fortunately, this is not the case for Benny and his cousins. He’s enjoyed spending time with, primarily, three pooches belonging to one of my brothers and two of my sisters. In the pic below, you'll see that he took up surfing this year. (As always, you can click the photo to see a larger version.)

But back to those cousins.

There’s Calley, brother Karl’s dainty, pretty, King Charles Cavalier Spaniel. Looking at her, you just know she’s a girl. It’s easy to picture her as Lady, in Lady and the Tramp. Even easier than picturing Ben as a tramp. 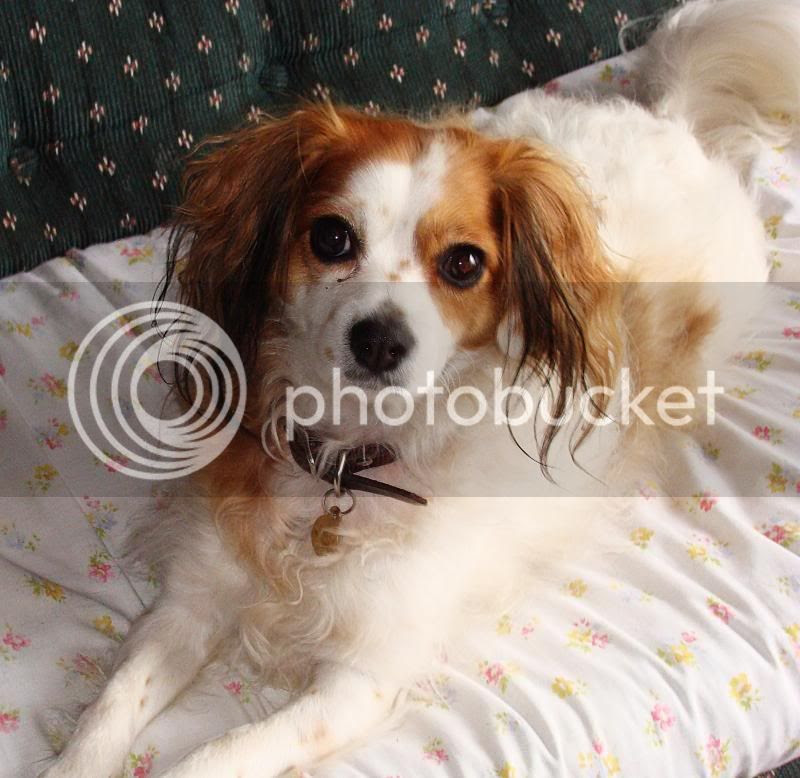 Wasn't lying, was I?

Calley is Ben’s size and he adores her. Well, he’d like to adore her. If she let him get with adoring range.

For Ben, adoring range occurs when his nose is from zero to one millimeter from her naughty bits. She tolerates it/him for a few seconds before doing the doggie version of slapping his hands. Fortunately, Ben’s a pretty good-natured pooch and deals well with rejection. He shrugs it off and tries again another time. Usually within a few seconds.

Luckily for Calley, sister Lisa’s dog, a big, lovely Bernese named Oona, is also at the cottage a fair bit and can share Ben’s affections. 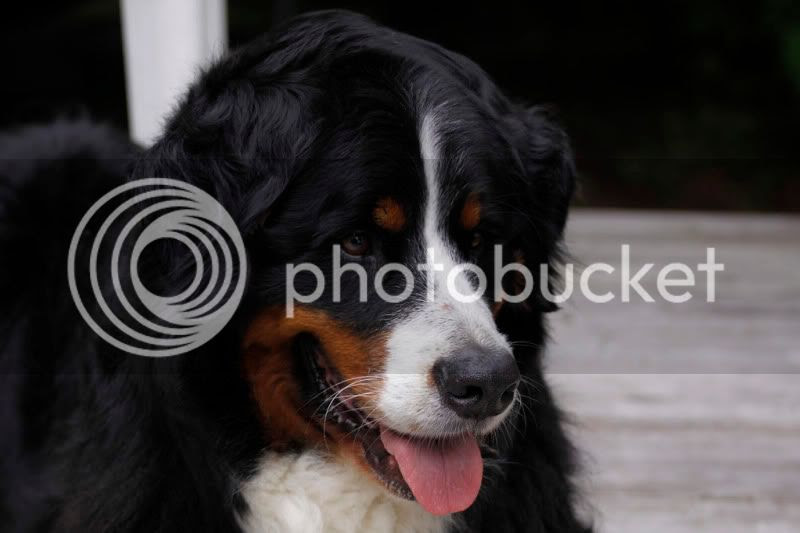 That's her. Thanks to Hilary for the pic.

Oona doesn’t quite know what to make of Ben. Which puts her squarely among the majority of those who’ve ever met him – four-legged or two. I think she just might regard him as a furry mosquito, one who jumps instead of flies. He’s forever leaping up to give her kisses. Every once in a while she lifts a massive paw to swat half-heartedly but I’ve yet to see her make contact. I suspect she secretly loves the attention.

But Ben has spent most of this summer bonding with Duncan, sister Theresa’s big, stolid (and solid!) sheepdog. In his last life, I’m pretty sure Duncan was a tree. His gait is ponderous. Despite being euchred several years ago, every once in a while Dunc gets frisky and will try to hump any animal or human that he thinks is presenting. In the pic below, Dunc is considering logistics while Ben is busy draining the lake. 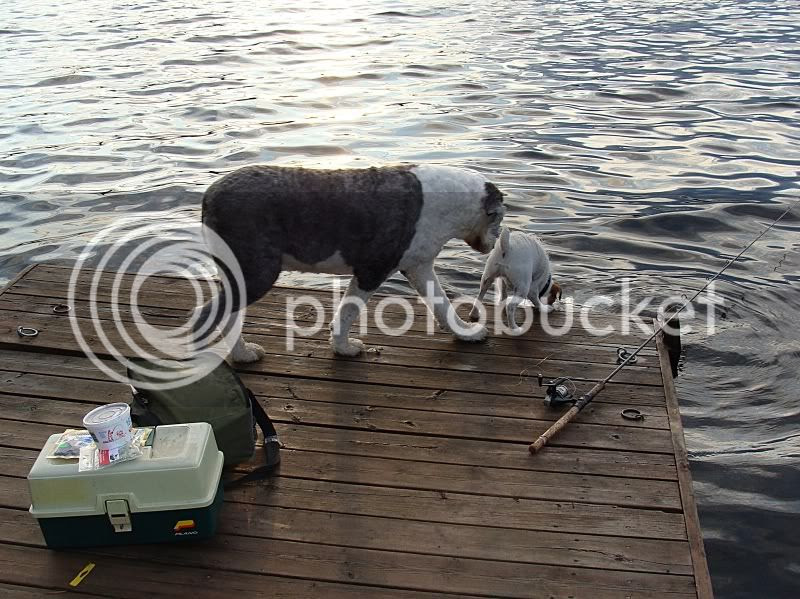 We’ve all learned to look around warily before bending over, especially when we’re on the dock. Duncan also has a signature move that cracks us all up.

When he wants into a room, he will approach the door, lower his head until the crown is just touching it, and wait.

Head bowed, apparently studying something on the floor, he waits. And waits.

He knows eventually some human is going to wander along and open it. All of us have had to deal with opening a bedroom or bathroom door and walking into Duncan’s face.

Ben adores Dunc. Yes, it’s true. Ben’s an equal opportunity pooch and is not afeered of showing affection to another male, jumping up to deliver kisses to Dunc’s face or sniffs to his naughty bits.

As much fun as Hilary and I have had this summer, I think Ben has trumped us. The grin doesn’t leave his face ‘til he sleeps. Which is about all he does for a couple of days after returning home - resting up for next time. Which, did I mention, is coming in a couple of days? (Neener-neener!)
Posted by Frank Baron at 4:23 PM 23 comments:

When asked, most of us define ourselves by our occupation. At various times I've been a farm hand, garbage man, salesman, worm-picker, youth counselor, writer, clerk and manager. I'm leaving out quite a few because I don't want this thing to get too boring while we're still in the first paragraph.

Some folks define themselves by their relationships: father, mother, brother etc. I'm still a father and brother but it's not the usual answer when someone asks what you do.

See what I mean? Kinda awkward.

For much of the last couple years I wasn't sure how to define myself in a nice, neat, occupational manner.

Even though my book's still in print and selling reasonably well, I haven't written anything for publication in ages, so "writer" felt kind of wrong. "Retired" wasn't quite right either.

A few weeks ago, as I crept around the circumfrence of a pond trying to spot a bullfrog nearly perfectly hidden by dense weed growth, the answer occurred to me.

(To avoid any confusion, a naturalist is one of those people who enjoys nature while still fully clothed. Unless it's really hot, when bathing attire may be called for.)

I did a little research (spelled "G-o-o-g-l-e") and found that one needn't have a science degree or even background to be a naturalist. Indeed, amateurs from Rothschild to Roosevelt have contributed greatly to the storehouse of knowledge gleaned via the study of the world around us.

All the job requires is noticing stuff. More or less. And maybe making a note or two. Suddenly, I realized why Yogi's statement about observing a lot just by watching resonated so deeply within me.

In a way, I suppose I've always been a naturalist, though I spent my first few decades specializing in fish and their habitat. Stupid me. I figured that only made me a fisherman. "Naturalist" sounds way more professional.

I've broadened my field of study now to include whatever flora and fauna happen to be in my field of view. I've quite happily spent a lot of time the last couple of years studying dragonflies, ants, tadpoles, bees, birds and other critters. I've read books, watched hundreds of hours of nature programs and visited the blogs and websites of other nature nuts.

I'm pretty darn sure my meandering and mulling isn't going to contribute much to the lore accumulated by my more distinguished peers. No matter. I ain't in it for the glory. My reward is the tiny "aha" of learning something I didn't know the day before.

For instance, while watching hummingbirds feed from our feeder at the cottage, I noticed, when the sun's angle was just so -- that hummingbird poop glistened like a tiny diamond. I noticed one male bird in particular who claimed our feeder for his own use and chased off any and all pretenders. He always fed from the same part of the feeder and I'd seen his tiny, glistening excretions several times.

After one such visitation, I decided to check the floorboards of the wooden deck which lay five feet (1 1/2 metres) below the feeder. I wanted to see what an accumulation of hummingbird poop looked like. Any naturalist worth his salt would be interested in something like that.

I squinted. I checked to see that I was indeed directly under the area where the hummingbird usually hovered. I took off my glasses and got on to my hands and knees. I rubbed my eyes and squinted harder.

Nuttin'. Nada. Not even a discoloration of the wood.

Obviously, hummingbirds are magical. Even their poop is so ethereal, it evaporates before it hits the ground.

Maybe I'll contribute some useful info to the cause after all.
Posted by Frank Baron at 2:32 PM 37 comments: