The other day, I was washing dishes and looking out the window into the backyard. We own a dishwasher but it broke about 10 or 12 years ago. At first I couldn’t afford to fix it or buy a new one, and then I could, but other priorities kept/keep rearing their heads so...we keep doing them by hand.

Actually, I kind of enjoy it. Busywork occupies the body while freeing the mind. About the only time it’s necessary to focus is when pain or pink soap suds tell me to be more careful with the knives.

I was looking at the snow-covered yard and trying to identify the various tracks which criss-crossed it. The rabbit’s were easy, as were the squirrel’s and of course, Benny’s were everywhere. On the shed roof were what might have been a cat’s or a raccoon’s. Those tracks were older and a slight melt and re-freeze had distorted their shape. Plus, to tell you true, the kitchen window could be cleaner. And further to the truth-telling thing, my eyes aren’t what they used to be.

I got to thinking about tracks and leaving marks and how Spring would obliterate those outside my window. But for a few weeks at least, after every snowfall, my yard would be an historical testament to critters’ activities.

Now, this internet thing, and more specifically, blogs, have made it easy for people to leave their marks. As long as the net exists, so will the tracks of many millions of people.

But I have a feeling that sometime after I’m gone, they’ll become curious about the marks I left behind and may even enjoy following my trail.

Your kids might too. And theirs. And so on.

And it’s cheaper and easier than building a bridge.

###
What could be better than enjoying good health and peace of mind?

So, I wish health and peace of mind for you and yours in 2009. Happy New Year from me and Ben. 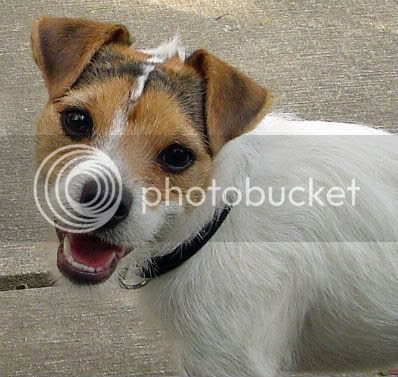 Hopefully there won't be a spring melt in Blogger and our tracks will remain.

Thanks for validating my strange need to blog. Suddenly I feel a whole lot less narcissistic.

I was just thinking of this whole legacy thing, and having not had children, etc... this is a great post! I feel rejuvenated to blog. :)

Lovely thoughts to end the year with. Thank you.

Can you include a picture of Benny on the next post. I'm certain you can learn to use the camera as well as he does.

Yup, that's it, Frank. I need to leave a trail of breadcrumbs back to my existence.

You leave such good tracks too, Frank. Happy New Year to you & yours and of course, Benny.

Glad I could be of assistance, Princess. :)

Thanks Leah. I do believe that's among my Top 10 compliments. :)

Reb, I see you've been sipping from the same well of kindness as your cousin. Happy New Year to you and yours too. :)

Thank you for your good wishes, Frank, and for all the pleasure you've given throughout the year. A joyful year ahead to you and your loved ones.

Thought-provoking words, Frank. And a good reminder of my much threatened, but not acted upon, "Mama Followed Me to Florida" book. Mama has written literally thousands of e-mails to me through the last 8 or so years. Without those written words I'd never have truly realized how wise and (unintentionally) funny and wonderful she is - she's 81 now and almost every e-mail now goes into the "Best of Mama" file!:)

To be remembered...isn't that what we all want?

Thank you Maud. You're very kind. All the best to you and yours as well. :)

Sandra, you know I'd buy a copy. And read it. And enjoy it. Give your Mom a hug for me please. :)

Happy New Year to you too Michelle. :)

Thank you, Frank. Mama says thank you for the hug, too - and that you're cute! :)

Your words are fitting in this day and age. The ending to your post is perfect with the Jack Russell Terrier.

It was enjoyable reading your post. Happy New Year to you and Ben. He's a cutie!! :-)

Benny has a somewhat...daft...look on his face there.

Hope you've had a fantastic Christmas...you can keep the cold.

You do a much better job at rearranging the alphabet.

what a lovely sentiment - oh you ;)

and then Benny!! In all his impish glory.

Firstly, sorry for the delay in responding. I was out of town for a few days.

MG - don't you ever get Mama's eyeglass prescription changed! ;)

Thanks Althea. Flattery will get you everywhere. ;) And "daft" suits Benny quite well. :)

Thanks very much Tootie. If you don't mind, I'm not going to pass your "cutie" comment on to Ben. His head's getting big enough. ;)

Blogging is the modern way of pissing on lamp posts :)

Frank, I could not agree more! In fact i recently said some of these exact things to a friend!

Meredith, I am always amazed at the intelligence, keen perception, and all-round wisdom of those who agree with me. ;)

Happy New Year to you and The Ben-Man, too. And he sure is mighty white for as much fish rolling as he does. I just pulled my from a enormous hole he had secretly been digging.

I've just had another look at that picture of Benny....why does he have a mini-mohawk?? I reckon you did that Frank...

I wish I could rearrange the alphabet as well as you do! I kind of stumbled on your blog, and I've really enjoyed reading it... As an amateur blogger, I feel sort of like I'm picking up some hints from you on how it's all done.

I know it's a bit late, but Happy New Years to you and your pup.

Sorry Terrie, had a brain cramp and thought I answered you and Althea (Cassandra's comment is new). Happy New Year back at ya'!

Althea, he does have longish hair growing here and there - kinda like tufts. He's weird. I dunno where he gets it. :)

Cassandra, thanks for the visit and the kind words. And I hope the year is full of bounty and health for you and yours.