About 50 years ago, my father took me fishing for the first time to a small mill pond about 40 miles from our home. Brook trout inhabited the pond, sharing it with coarse fish like chub, suckers and sunfish. I proved adept at catching the latter and every once in a while a beautiful, silvery trout danced at the end of my line.

Most every year since, I’ve returned to the pond to try my luck. At first, I’d go with Dad and his friends and my brothers. In more recent times I’ve taken my sons. The fishing fanatic gene seems to have skipped a generation though, so these days I mostly go alone.

The best fishing is in late Spring. When the water warms in summer, algae blooms carpet the surface, making it tough, bordering on impossible, to present any bait or lure.

The mill is over 150 years old and still works, if irregularly. The only place one can fish is from the road directly opposite it, near the spillway which tumbles under the roadside bridge.

To tell you true, the fishing’s been no hang there for quite a few years. I keep going back because I just love the place. Part of the love stems from the happy boyhood memories which were born there. Part of it is the peaceful, idyllic surroundings. The pond nestles in a small vale between hills, like a jewel snuggled between bosoms.

And partly it’s the cats.

Over the decades, several generations of cats have lived in, or under, or beside the mill. They’re all quite feral and almost always, pregnant females. I can only recall one allowing herself to be stroked. For the most part, they keep a wary distance - closing the gap only when they note a bent fishing rod. At that point, they meow for a donation but still rarely venture closer than five or six feet.

I would always oblige, often switching tactics so I could catch a few chub. (For the uninitiated, chub are small, minnow-like fish, of use to humans only as bait for larger fish.) Most of the chub were 3"-4" long, with the occasional behemoth reaching 7"-8".

Yesterday I went to the pond for my first visit of the year. It was a grey, cool day, punctuated by several brief but fierce showers. Usually the mill owner’s dog visits to see what I’ve brought for lunch but there was no sign of him. There was no sign of trout either and despite catching and releasing a few chub in the first couple of hours, no kitty emerged from the bowels of the mill to mooch.

I was thinking of moving to another nearby pond when I heard a meow. A grey and white, very pregnant cat approached to within 10 feet and made it plain she’d sure appreciate something to eat.

A couple of minutes later I caught a large chub, about seven inches long. I thought it should keep her belly full for a couple of days at least. A sharp rap to the head dispatched the luckless fish. I bent down and offered it to the cat.

She came nearer but remained well out of arm’s reach, obviously torn between wanting that fish and needing to steer clear of this Two Legs. At that point, a car approached and the cat dashed back into the mill through a permanently ajar door. When the car passed, I walked to where the cat disappeared and left the fish just outside the door.

Within 15 seconds she reappeared to snatch the fish, turned, and disappeared inside once again.

A few minutes later, she announced her approach, still licking her lips.

“Good grief kitty! That fish should keep even a preggers lady satisfied. You want pickles and ice cream now?”

She gave me that look that cats give when they’re carefully considering one’s words. Or maybe the fish was backing up a tad. Then she meowed plaintively again.

I caught another, smaller chub a few minutes later. Again, she refused to take it from my hand. I tossed it towards her. She quickly picked it up and dashed back to her hidey hole in the mill.

About 10 minutes later, we repeated the performance yet again. I now assumed she was stockpiling the fish. She might be only days away from giving birth and even a rank fish would be better than nothing while she was indisposed.

When she reappeared yet again I was having my own lunch. Part of that lunch was a hunk of cheddar. I broke off a piece and tossed it. She picked it up and dashed off to her larder.

When she returned again, I knelt and held out another bit of cheese. She came within two feet of my outstretched fingers, reached out with a paw and made a half-hearted swipe, falling inches short.

It was something. I tossed the cheese a few inches and she snapped it up. This time, instead of running back to the mill, she sat near me and ate it.

“Well, I suppose I’ll take that for my thanks, you deciding to dine beside me and all.”

She licked her paw and then her face. I returned to my fishing, figuring on giving it a few more minutes before trying that other pond.

While focused on watching my float, I felt something brush against my left ankle. I looked down in time to see her rub her cheek against my leg once more before she turned away and sashayed back towards the mill.

I grinned like a god-fearing Irishman who’d just been high-fived by the Pope.

I’ll wander by again in a week or so and see how she’s doing. 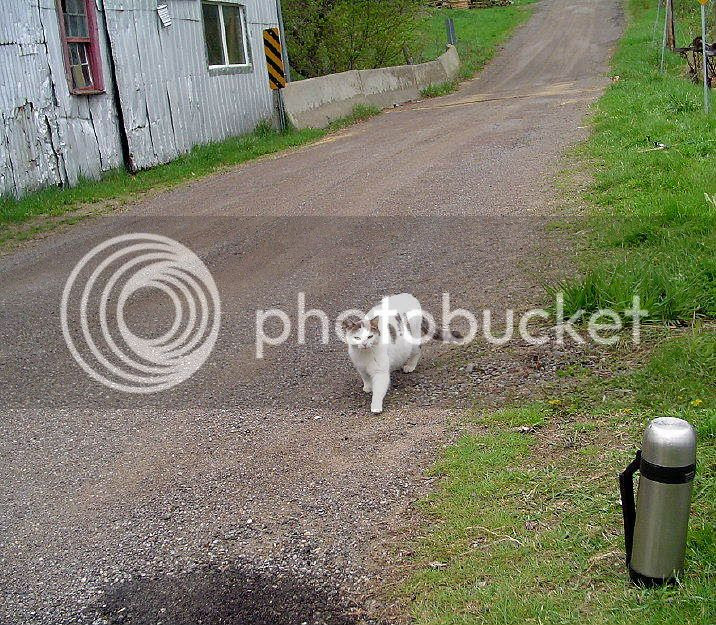 This is the hungry mama-to-be. To the left, you can see the crack of the door through which she appears and disappears. (You can click the picture to see a larger version.) 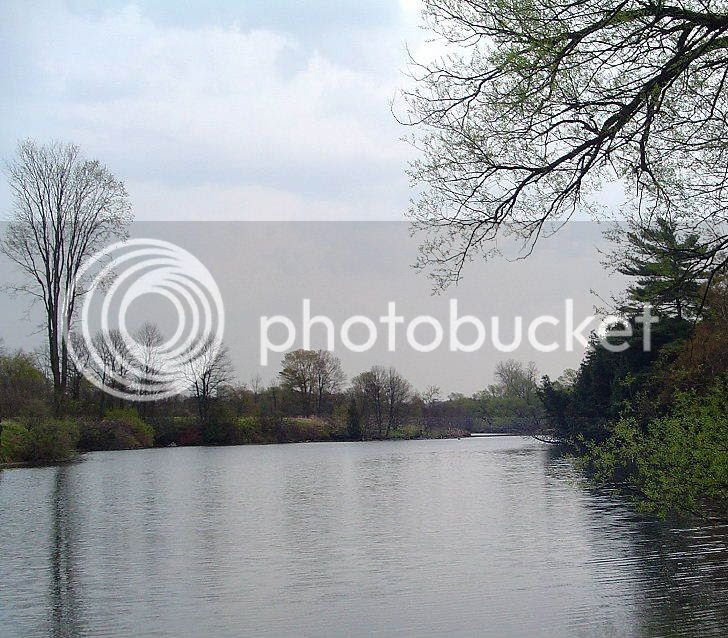 This is the view of the pond from where I fish. She's a nice looking cat for a stray! Funny how feeding them makes them like you ;)

I enjoy your stories so much, Frank. What a charming spot, no wonder you keep going back. I have a similar pond & memories of catching my first fish (a sunfish!) back in Wisconsin.

So sweet of you to feed the kitty! In a little while you'll have a bunch of wee furry friends following you around the pond.

I love that pond and surrounding area, even though when I saw it last year, the water was covered with the algae to which you referred.

Sounds like a lovely day and I wish I could have joined you this time around. The cat connection was quite the bonus.

Yeah, weird how that works eh Stace? Hay! You don't suppose that's why men ask women out to dinner, do you? ;)

Althea, I trust you mean that in the macho sense of the word? :)

I'm glad you enjoy them Jo. Thanks for saying so. Gotta love sunfish. They've helped introduce many a kid to the joys of fishing/nature.

Yep Hil. The kitty's reaction was the day's topper. Maybe you'll see her (and a kitten or two) next time. :)

Found my way here from Hilary's ... I am not a fisherperson tho my granddad was .. but I do love animals and enjoyed your befriending the cat almost momma ... :-Daryl

I want to know what's inside that mill!

I just knew you'd have a soft spot for pussycats.

Love the mill and the millpond.

Thanks for the kind words Daryl. I'll thank Hilary too for giving you directions. ;)

Lisa, the last time I was inside was about 5 years ago and I didn't have a digital camera then. I recall heavy wooden beams, lots of spilled oats/wheat/barley and their distinctive, quite pleasant smell. I'll try to take some inside shots this year. If I do, I'll post some. Thanks for the visit.

How did you know Leah? What gave me away? Was it the fact I, um, tolerate Hilary's two furry, purring devils? ;) Thanks for taking the time to visit and comment.

I really enjoy your stories Frank and that cat - she is a beauty! Very kind of you to feed her and make friends. Lovely pond too.

Is the thermous in there for perspective? And what's in it? *wink*

That mill is gorgeous! I assume there aren't any children around. Because if I were a kid and saw that, and eyed that ladder....man!

I know there's a catfish joke in there somewhere, but I can't quite get it right.

Love those bohemian type cats - no Tender Vittles for them!

Thanks Reb. It's not that I'm being kind, really. Who can turn down a pretty lady saying "please?":)

Oh, you have a good eye Terrie! I kept the thermos in the shot for some perspective, yeah. (It's a large one, holding 2+ litres.) And it only had tea in it. This time. ;)

LOL MG. You're right, "catfish" is a punchline waiting to happen. Thanks for the visit and kind words. :)

I'm asking myself if this could have been situated in France. There are very old houses / mills there too. And ponds and cats.
I love the story. It makes me curious about the cat. What will happen to her?

Let's see what Mister Baron is doing, I thought. No wonder, he was fishing :-) Nice, how you fish for the cat, how you observe and think (the stockpiling) and of course how you know your way with words.

Thank you Hildegarde. You're very kind. :)

Oops! Sorry Odile, I responded out of order.

France has mills much older than this one, I'm sure. I spent a few days there a long time ago. (VERY long ago....)It would be wonderful to see it again.

I'm hoping to check on the cat again soon and will make sure I let folks know what I find. Thanks for the visit and kind words.

My cat was a feral kitten that fell in love with my son. That was 9 years ago and she's the best cat in the world! I don't know what I'd do without her. She actually resembles "your" cat. :-)

Laurie, I'd love to hear how your son and the cat bonded. Thanks for the visit and kind words. :)

I love magnolias, but also have a love/hate things with pillows. Somehow mine seems to change shape constantly. Oh, and it smells of dog even though thte dog is never on the bed (when I am at home).

Psyche, I think your parenthetical phrase at the end is a Very Important Clue. ;)

Thanks for the visit.