If you haven’t read the first part of this story, you may do so by scrolling down the page a bit.

###
Approximately 150 yards south of where I was fishing, and on the opposite side of the creek, is a boat launch ramp and parking lot. The ramp is busy during the summer and fall months with pleasure boaters and salmon/trout fishermen. They launch their craft in the creek and putter south for half a mile until they reach the harbour and Lake Ontario.

A car with a canoe strapped to the roof appeared in the lot and gave me something new to look at. Two people got out of the vehicle, unstrapped the canoe and carried it to the water’s edge.

It was early afternoon now and the temperature had probably reached 10C (50F) under sunny skies but the water temperature was still only about 4C (39F). I couldn’t see the people very clearly but it seemed obvious they were not wearing floatation gear. After placing the canoe in the water, one of them returned from the car carrying two very old-fashioned, keyhole-type life preservers which were plopped into the bottom of the canoe.

I shook my head. If they were to overturn, hypothermia would set in quickly and there was zero chance they’d be able to don those antique life jackets while in the water. I hoped they had no intention of heading to the lake proper.

It seemed they didn’t. They pointed their canoe upstream and stroked their way toward me, politely staying close to the opposite shore where they were least likely to interfere with my fishing.

A russet-haired woman, in her early-mid 30s and wearing a heavy knit sweater, sat in the bow. I didn’t get much of an impression of the man in the stern except to note he also wore a sweater and some kind of off-white toque on his head.

They both waved as they passed and I waved back. As I watched them stroke their way upstream, my dismay at their old lifesaving gear was replaced by admiration for their paddling prowess.

They stroked and paused in unspoken unison, displaying a synchronicity that could only be born from hundreds of hours of togetherness. On every second stroke, the woman in the bow would rest her paddle on the gunnel for a two-count. The man would simply pause in mid-stroke, paddle blade hovering. Their strokes were precise and clean. The blades barely dripped. It was poetry. Too soon, they were out of sight.

###
Shortly after the canoeists passed, Mr. Couple, the lonely goose whose mate had been driven off by a rival, caught my attention again. He had been desultorily preening on the opposite bank when he suddenly waddled back into the water and began swimming southward, to my right. He was making soft noises, almost as if talking to himself, and was swimming with intent.

In a moment, I could see why. Swimming upstream to meet him was his lost lady love. I was amazed he could recognize her from such a distance. I’m fairly certain he didn’t hear her. There was something about her, perhaps her swimming style, that he recognized from over a hundred yards away. I was very pleased they’d found each other again.

So he wasn’t being blase (or a pig!) after all. He was just patiently awaiting his mate’s return. He had faith.

Men are such saints.

###
A half-hour after they’d disappeared upstream, the canoeists returned, this time a little closer to the middle of the creek. We chatted briefly about the lovely day as they passed me again. This time I noted that the man’s “off-white toque” was actually a thick head of grey-white hair. He seemed to be in his late 50s or early 60s and I wondered if they were a father/daughter or May/December pair. I hoped the former.

How wonderful to foster, then share, a much-loved activity throughout childhood and into adulthood, like my father and I did with fishing. It’s a priceless gift for both parent and child.

###
May have jumped the gun a tad when I declared the gander a non-pig. A few minutes after his mate’s return, he swam behind her and, in a flurry of splashing and honking, clambered atop her back, immersing her completely.

If the act I’m pretty sure he intended, actually occurred, I sure hope she was one of those rare, easy-to-please females because in two seconds they were back above water and swimming apart.

###
The shadows were lengthening. My thermos was empty. The fish, if any were indeed around, were too polite to disturb my half-day reverie. That other reality beckoned and I reluctantly packed my gear for the half-mile walk back to the car.

Several hours earlier, when I walked to the fishing spot, I passed a couple of mated pairs of geese swimming in the creek. Now, on the way back, they were on the shore and quite close to the path I was walking.

The two pair were about 100 yards apart. As I clomped past them in my hip waders, the males (I presume) hissed and muttered soft warnings. I could tell they didn’t want to have to mess with me but would, if I came too close. I reassured them, both verbally and via my body language, that I posed no threat. I avoided eye contact, spoke softly and didn’t break stride.

Men are so brave, respectful, and all-round admirable.

###
Maybe my next fishing adventure will feature a finned critter or two. Or not. Doesn’t matter. Fishing is always good. 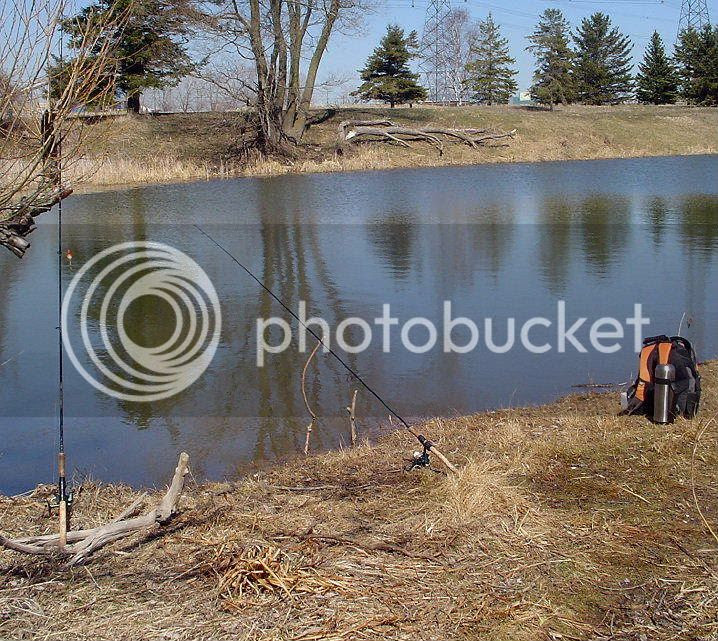 Here's where I set up shop for the day. The rod on the left is ready for action. The rod leaning on the stick is already in action - sorta. 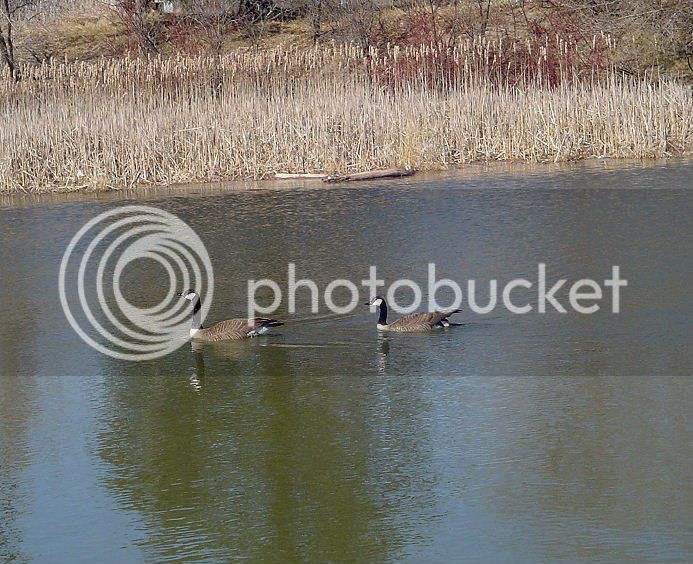 Mr. and Mrs. Couple, in a non-intimate moment. 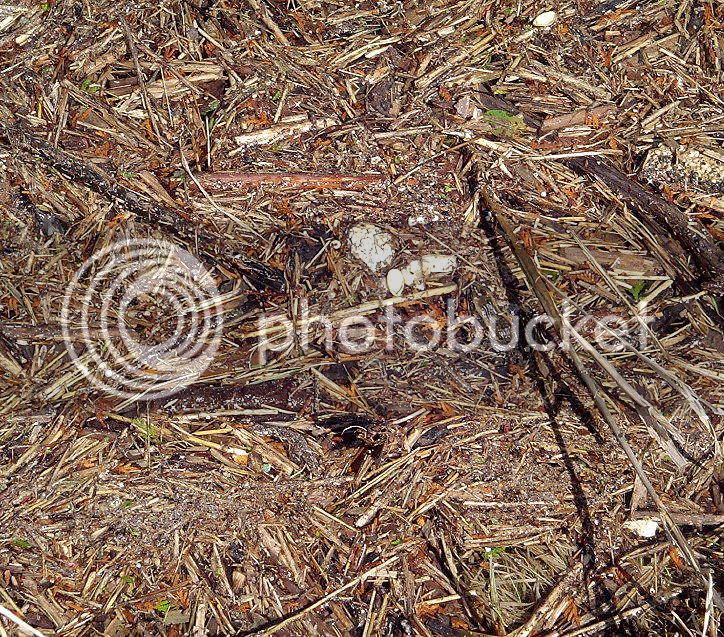 Can you spot the froggie above? 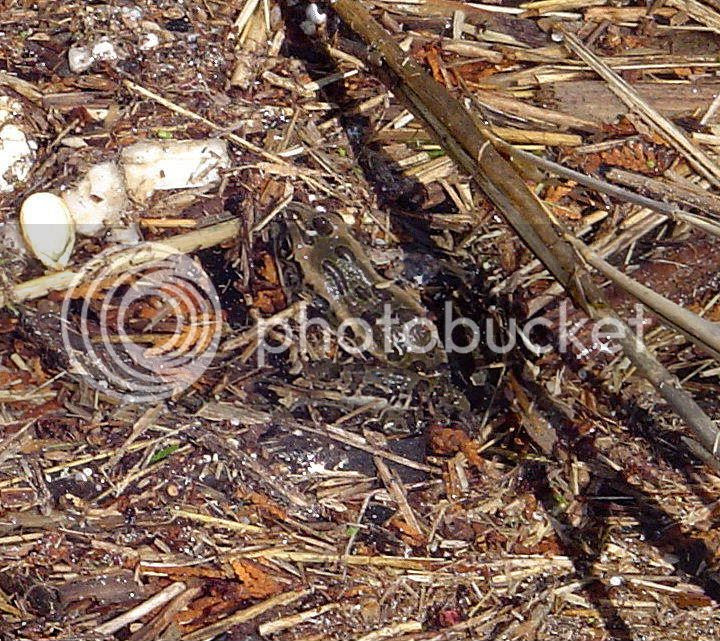 Men are so.. deluded. But some tell wonderful tales.. and take cool photos.. thanks for that.

I didn't see the frog at first, but I did see Waldo hiding behind some twigs...

You had me worried about the romantic canoeists there for a bit! Glad everything turned out well.

Nice stories, I've been enjoying our conservation area up the road and have spotted many suckers and a couple of trout.(Eli's been fishing everyday!)
By the way "Part One" was written on a very important date on the calendar.
Men (brothers) can be so forgetful!

Dang it Hil! I've been looking for an hour and I can't find Waldo in there anywhere!

But I think I might have spotted another float.... ;)

MG, I had another couple of hundred words on the canoeists, telling about when they left (safely) but my dang editor cut them! Don't you hate when that happens? :)

Happy Birthday baby sis! If you remember mine, you'll get to wield the guilt stick for a whole year! :)

Really great story Frank! I have to admit, I didn't see the frog in the first photo, but, jumped when I saw it in the second ;)

I am glad to hear that you have polite fish there, I would hate to think of any of them ruining a perfectly good fishing trip!

I found the frog in the first photo, but it took a while.
I must agree with Reb about finding polite fish. You were very lucky.

Reb, it think it's that innate Canadian politeness - even extends to fish. ;)

Well Leah, no fisherman I ever knew would turn down an extra helping of luck. But - at the risk of tooting my own horn here - I HAVE been fishing for about 50 years. So part of it was skill. ;)

I loved the passage about the canoeists rowing in sync.

Your geese stories slay me.
Men are so...enthusiastic. And heavy. Poor Mrs. Couple.

What froggie? I don't believe you! Oh, no, there it is... I think... Men are so infuriating :) Aidan keeps promising to take me fishing - I've never been... but it hasn't happened yet. Of course, his fishing gear is all back at his parent's place, about 700 kilometres away, which doesn't help.

Jo, Mrs. Couple seemed none the worse for her dunking and...uh...whatever else it was that may or may not have happened while she was underwater. :)

Stace, keep bugging him. If finances allow, invest in more gear. Or just come on over here, I have about 20 rods and reels. I can spare a couple. :)