The first winter storm of the season greets us as we step out the door. Sleet, rain, freezing rain and snow have been, and still are, tag teaming - slapping hands and changing every few minutes. The first half of our walk is northerly, into the teeth of the storm. I am wearing my warmest winter coat. Pre-Benny, it was only worn when engaged in some unavoidable, outdoor wintertime task like snow shoveling. And since my Stupid Heart Attack, I’ve managed to fob those tasks off on the lads more often than not.

It is too bulky for slipping into and out of the car easily, so entire winters have gone by without me wearing it. But this morning, as I heard the wind howl and the sleet patter on the windows, I had a hunch it would be a good choice.

The coat has a hood - a nice, warm hood. Unfortunately, it’s enormous. When I wear it, my world view is about the same as if I was peering through a toilet paper tube, which, for the record, I hardly ever do. Unless I have to.

Anyway, I don’t wear the hood. A toque keeps my head warm enough but my glasses are soon speckled with sleet. This adds a not-unpleasant extra layer of blurriness to the soft-focus beauty of a snowy day.

I am reminded that it also adds a wee element of danger when, a little later, I get hip-checked by an unnoticed tree on my left.

Ben accepts the white-covered sidewalk with equanimity but seems a bit nonplussed when we get to the field and his Favourite Pooping Place. It appears that nothing in his previous seven months of existence has prepared him for grass that crunches.

He tippy-toes tentatively, here and there and back again, before finally finding a spot worthy of his gift.

###
The above is an excerpt from today's entry of a journal I've begun keeping. Be still your beating hearts - it's not gonna be a daily diary of Benny's poops. The journal, along with some backstory and research, has occupied much of my time recently. I'm beginning to think there just might be a book in the making. But it's early days yet.

However, time spent on this project (along with it being my favourite time of the year to fish) means the column/blog will be appearing (more) sporadically for a while. I'm debating running more excerpts from time to time. It's a bit sticky, copyright-wise, especially if they appear on the blog. I may restrict further excerpts to my email subscribers. Jury's still out on that one.

I've been out four times in the last couple of weeks. Got skunked the first time, with only one tentative nibble. Caught three the next time - two the time after that and three again on Tuesday. Each time, I was only fishing for two or three hours so there's no complaints from this corner about my luck. (Of course, we all know it's not solely luck don't we? Just mostly....)

I kept four of the fish and had decent success smoking two of them in my nearly-new electric smoker. I'll continue to experiment with brines and wood chips and smoking times until I feel I have a couple of foolproof formulas for great-tasting fish. Naturally, as mentioned above, if I'm going to develop a great recipe, I'm going to have to catch more steelhead (rainbow trout).

Sigh. Such sacrifice in the furtherance of the culinary arts....

I'm quite encouraged by the last batch. Kinda wish now though, that I'd written down what I did. My mental notes keep getting misplaced.

I'll wrap this up with pics of a nice, 8-lb. male I released after a spirited tussle and a smaller female that became destined for my smoker. 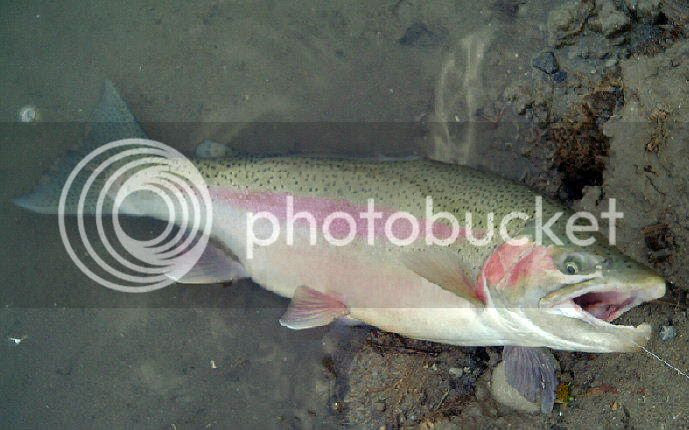 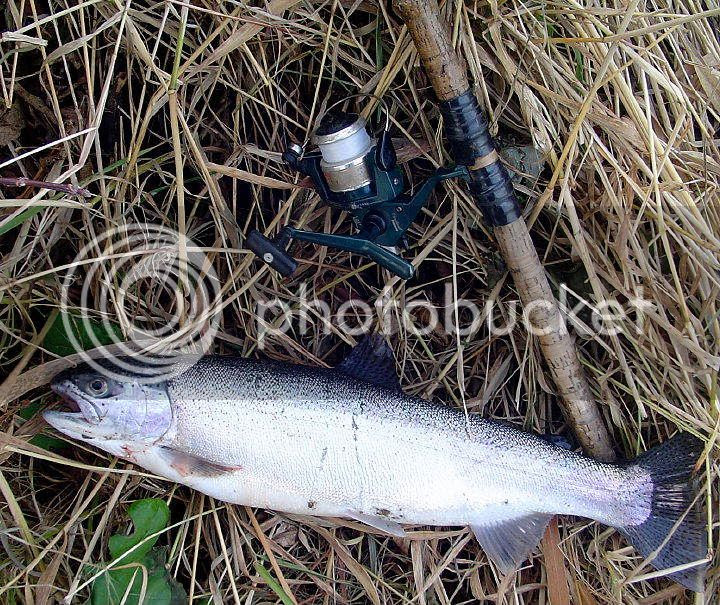 I meant, and forgot, to wish my many American friends a Happy Thanksgiving in the emailed version of this column/post. Consider yourselves wished!
Posted by Frank Baron at 12:22 PM

I can't wait to read all about your adventures with Benny. I know it will make a great book... a best-seller if the above excerpt is any indication.

That rainbow really is colourful, and the other one was delicious!

We all know that catching a fish isn't luck when it comes to you, Frank. You're an expert at reeling them in. :)

Great that you've started a journal. Keep those pages going and that book will be done in no time.

Hilary, round up 10,000 or so like-minded folks for me willya? It'll increase my odds of getting a publisher interested. :)

Jo, just between you and me, an extra dollop of luck often comes in handy. Thanks for the kind words. :)

I'd love to go fishing one day. Maybe Aidan and I will fish in the lake in Canberra when we're properly moved... that would be nice...

I remember my first experience of snow. It wasn't very long ago - January 2006 I believe. In Bradford, Yorkshire, England. It was so awesome! And weird. I didn't have waterproof shoes... almost got frostbite in my toes in York... but it was all worth it!

Stace, I think you most definitely should try fishing. Then visit here and I'll show you how to catch them in winter. ;)

If I were a fish I'd want to get caught in winter... out of the freezing water and into a nice hot frying pan!!!

Frank, make it 9,999 people. I'd love to read a book about your adventures with Benny.

You should most definitely write the book--and it ought to be a best selling relationship book. The book jacket might read, "Wanna have the perfect relationship? Start with a dog, a canine that is."

MG, I think figuring out how to co-existent, sanely, with a JRT, probably requires a finer mind than mine. ;)

For two weeks I have been bothered by something in this post. Today the problem is solved. It was the redundancy! In one paragraph you mentioned conducting research twice. And I'll bet not many caught it. I was distracted by the shiny objects you found in the river. One of my favorite books in the whole basement - that's about 4000 books worth - defines research as fishing. Your post told that you conducted research and went fishing!
And I have a gripe, too. The drought here started in April and we're still waiting for a really decent stretch of rain. Today were getting snow. Up to two inches is forecast. All the schools are shutting down early. And there are still no fish to be found in my favorite holes.

It took a keen eye (and good memory) to catch that redundancy Bruce. Good for you! ;)

If there's a fair smattering of snow around and then you get a nice, above freezing day - a nice runoff can happen.

When that happens, it very often triggers fish activity. Can be a good time to be on the water....

Sorry for the delay in the response. For some reason, I'm not getting emailed notification of replies.