Our family cottage, with which you folks have become familiar over the last few years, has all the amenities necessary for a comfortable life. At least it does from May to sometime in October. Because it is not insulated, nor does it have a foundation, the pipes would freeze and split during winter if the water remained connected.

Therefore, every October, sometime after (Canadian) Thanksgiving, a local handyman comes around, turns off our water, drains the pipes and fills the traps with antifreeze. From that point on, until late spring, trips to the cottage are of short duration and very much weather-dependent.

The weather this fall has been so darn balmy that we hoped the handyguy would postpone his work into November. When contacted and asked about that possibility, he said it "depends." Which is local-speak for a shrug of the shoulders.

So when we ventured up there last weekend, even though it was two weeks after Thanksgiving, I was hopeful that we'd still have running water.

Adjustments must be made when one is living without plumbing. Bathing, washing dishes, going to the bathroom - all become tasks which require foresight, planning and resigning oneself to a certain measure of discomfort. It helps to remember that not many generations ago, folks lived that way all the time. It also helps to be a bit nuts.

But what really helps, when you're "showering" outside in a cold rain, then rinsing off in a 55F (12C) lake, is to lubricate oneself on the inside first with a belt or three of Scotch.

It was BennyTheJackRussellTerror's first visit and he was in heaven. He loved having endless room to run and surprisingly, seemed untroubled by the fact we were plumbing-challenged. He delighted us by inventing a new game - a game of stunningly-inspired lunacy.

It was windy much of the time. Wind affects lakes by making waves. Waves roll onto shore. Benny's shore. They must be thwarted. So he took it upon himself to patrol the rocky shoreline, defending all and sundry from the endless parade of waves by biting them. I'll add a link to the video evidence at the end of this.

A highlight for me was seeing not one, not two, but three otters playing a short distance from our dock. In my 40 years of cottaging at that lake, I'd never seen an otter before. To see three gamboling a few feet away was breathtaking. Unfortunately, by the time a camera arrived on scene, they were out of reasonable picture range.

Here are a few pics from when my camera was with me: 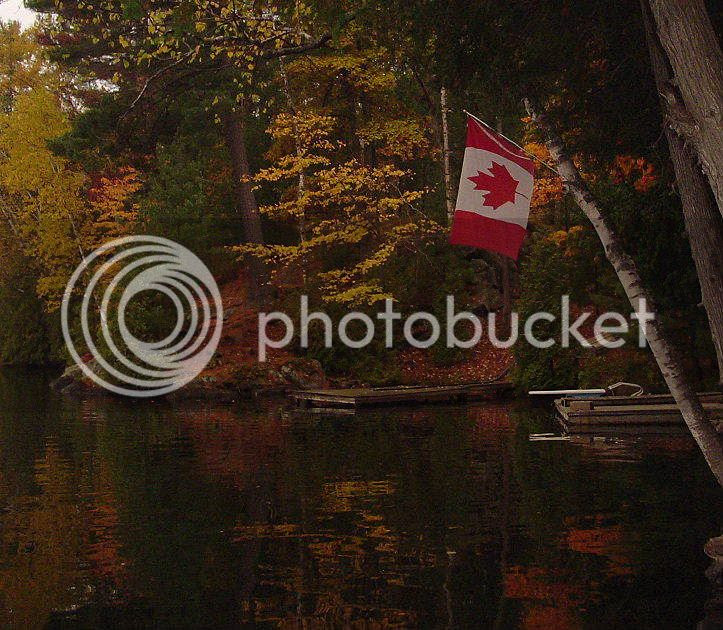 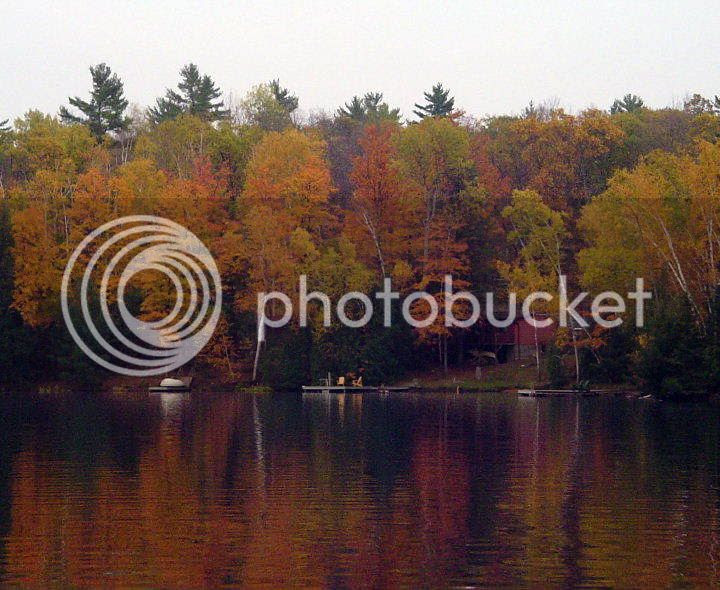 A plus on dark, rainy days from a photographic viewpoint, is the wonderful colour saturation. 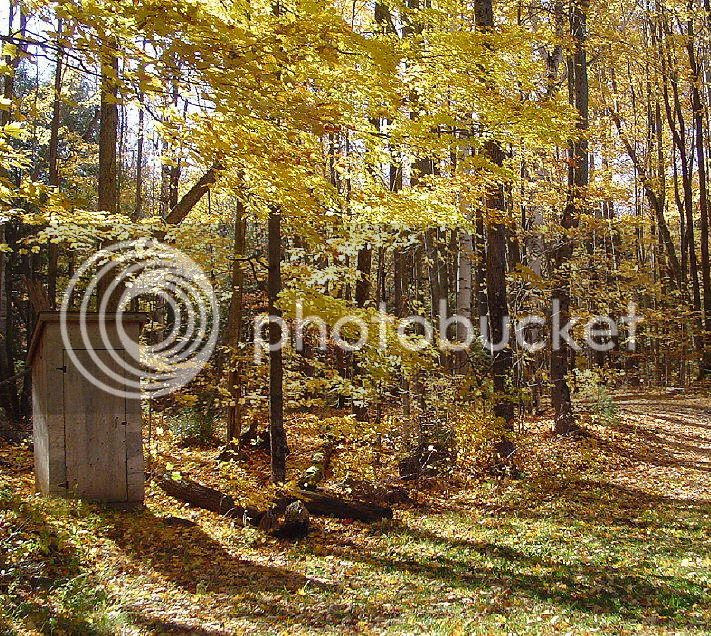 Without running water, this unpretentious little shack out back assumes an important role. 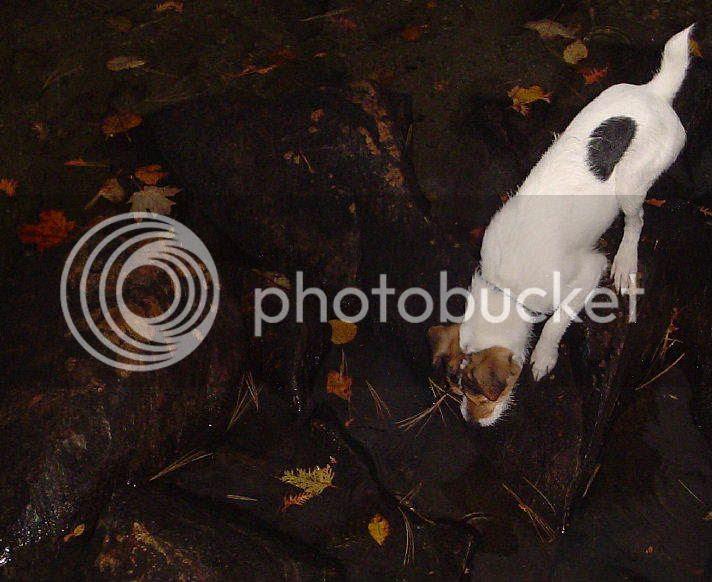 Benny is prepared to defend the rock from the next wave's onslaught.

The next three images show how patience can be rewarded and why it's always a good idea to have a camera handy. The day was dark and unsettled. A few moments before sunset, a glow began to appear in the west. The pictures were taken in approximately 5-minute intervals. 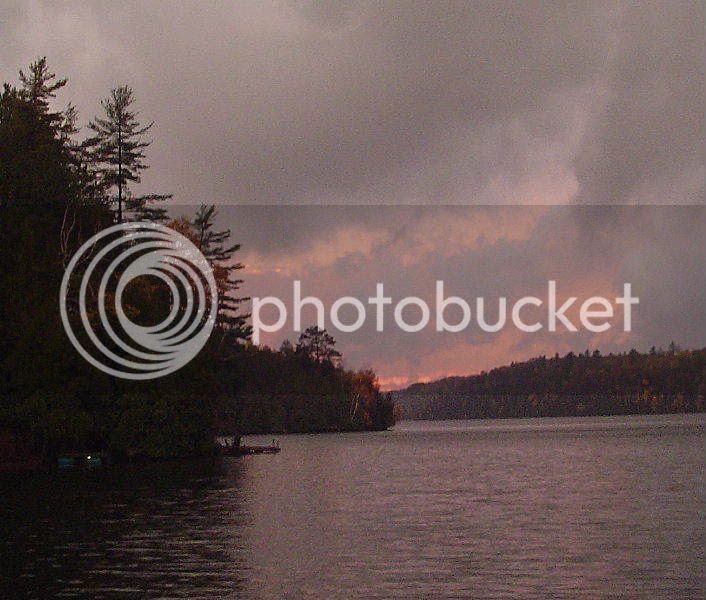 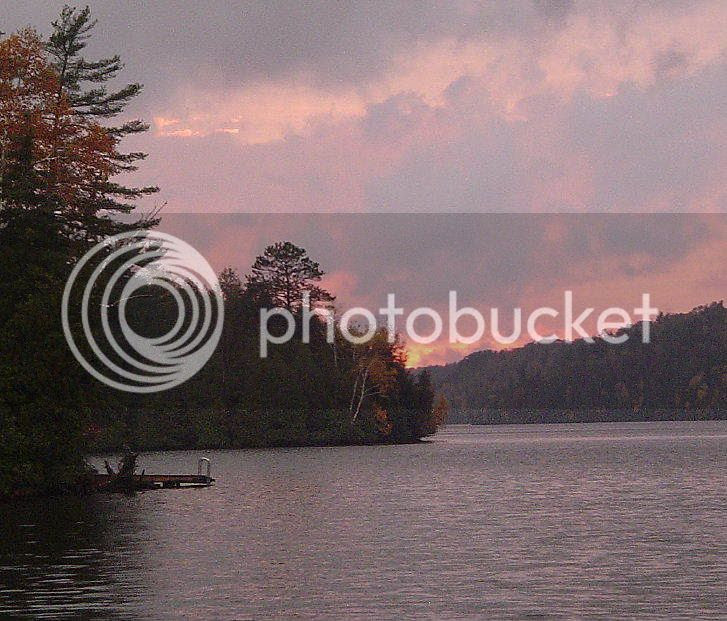 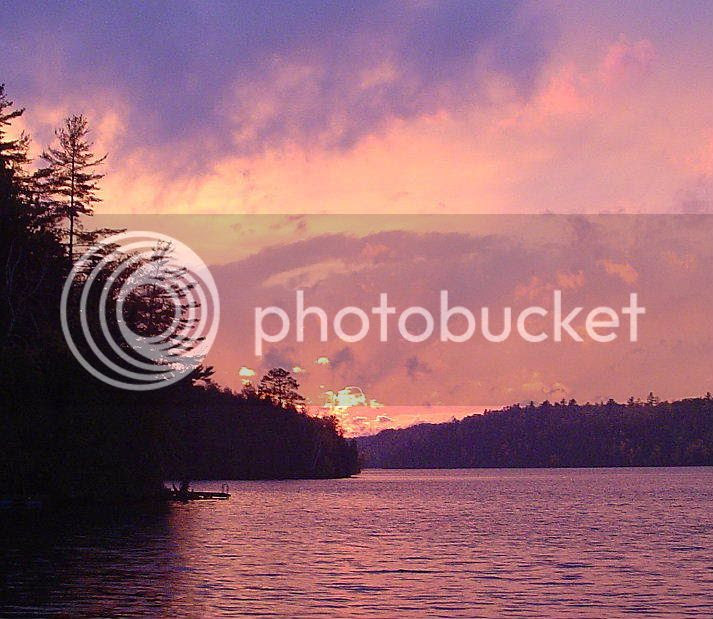 Hilary has also blogged about the visit and posted pictures. As of this writing, I haven't seen hers yet. I'm pretty sure we're going to near-duplicate some pictures but I didn't want to be influenced by what she posted. I know she's taken some great shots though. You can visit her blog, The Smitten Image, by clicking here.

As promised, you can see a snippet of Benny's heroic wave-biting here.

I love that 2nd shot of the trees and their reflection.. and the last three of the sunset... and the one of Benny.. oh and .. well they're all great, as was the time spent there.

I'm so jealous of your trip!

Well, except for the lack of running water part. I'm pretty attached to indoor plumbing.

Benny's video was hilarious--what a valiant watchdog! Glad he kept those waves in line. Otherwise, I'm sure they would have drowned everyone within miles.

It sounds great and it looks even better! That dog is in heaven!! My dog wants to go too!

Thanks Hilary. I think my camera setting was off but I like the result in some of the pics anyway.

It did take some adjusting Crabby. And ingesting.... ;)

It doggie AND people heaven iron-man. Well, at least some people. (But all dogs would love it.)

Thanks for stopping by. :)

We used to have a holiday house by a beach, and our labrador managed to trip over a wave.

How cool to see Benny in motion! Reminds me of CBS Sunday morning and how they always end with some nature scene with swooping birds or hooting owls. And the photos are inviting as always:)

Wow, I'm very much enjoying hearing (and seeing) yours and Hillary's escapades... Did I miss something or are you two nice n cosy these days? :) Obviously I did!! Cute.. Anyway, continue to keep us all in the loop.

Next time, perhaps you could find it in your heart to invite me!? Looks like an idyllic setting for me to get stuck into some landscape photography. As much as I like London, its one hell of a rat race and I couldn't think of anything better than getting out to a quiet old cottage for a long weekend!

... And good company certainly doesn't hurt either! Who needs proper showers when you have that?

Stace, dogs are darn goofy animals. You can quote me. :)

Ubi, if you're in Canada again sometime between May and October, we can probably work it out.

Another great story and picture of your little paradise in Canada’s beautiful wilderness. Like the video of you dog, too funny and you’re right dogs can be very goofy. My dog is a real clown sometimes.

A gorgeous place, Frank. Great for rejuvenating the soul and tweaking the creative mind.

But tell me, does it get spooky there at night? Whenever I go camping in the woods, I always hear "things" all night long. And we aren't talking squirrels.

Elizabeth, I had one spooky incident which I think I wrote about some time ago. I'll check. And if I haven't already done so, I'll write about it.

Wow, I was just having a whopping case of deja vu. I mean, I was like...my lord does Hilary KNOW that Frank has a Jack Russel that bites at waves too?!

And then I figured it out.

Glad to hear you figured it out! :)

Now, could you explain it to me?

Well, I am juggling three theories:

one, that Benny has mastered both time and space travel which allows him to be in two places at once

two, that Benny has an evil twin (or is HE the evil twin, you never really know in these situations)

three, that Benny is a super cyborg dog from the future that has come back in time and begun replicating at an alarming rate.

OMG! They all sound so plausible!!

I suppose time will tell. :)

Absolutely beautiful pictures, Frank! I loved the clip of Benny biting the waves. That was cute...and priceless. Thanks for sharing.

Thanks for dropping by and saying so Jo. :)