There’s a small zoo in our town that bills itself as North America’s oldest privately operated zoo. When the lads were young, we’d often spend an hour or two there every couple of weeks. A family pass, purchased for about $60, allowed entry all year round. It was a pretty good deal.

There’s not a lot of animal attractions but they’re reasonably varied: elephants, lions, tigers, bison, wolves, monkeys and birds all have their own enclosures while goats, deer and some antelope wander the grounds. Some of the animals have been used in Hollywood films and tv series such as Michael Douglas’ The Ghost & The Darkness and Peter Benchley’s Amazon.

As the boys got older, it became too tame for them. They much preferred the occasional foray to the Metro Toronto Zoo with its many hundreds of critters from around the world. As a result, it had been several years since we visited the local one.

Last week, on a whim, we decided to check it out again.

The parking lot was jammed which surprised me some but that surprise was dwarfed by my horror at the entry fee - $55 for the three of us! Imagine, for a zoo which takes about an hour to circumnavigate unless you pause at every exhibit for 10 minutes and crawl to the next one!

My wallet balked at this outrage and I told the lads we’d have to come up with a Plan B.

"I dunno, let’s just drive for a bit and think it over."

So I pointed the car out of town and drove. Ignoring their groans, I began recalling aloud how, as a child, my folks would shoehorn six of us into the back seat every pleasant Sunday afternoon for a drive. We rarely complained because they dangled the prospect of an ice cream cone at the tail end of our journey.

Sometimes, we drove to the tiny local airport to watch single and twin-engined planes take off and land. For a few years, we drove to "look at houses." Longtime readers will recall I grew up in a small house wherein the six of us kids shared a bedroom. When I was about 10 or 11, my parents bought a lot where they intended to build a house one day. Sometimes we’d visit the lot and imagine it with a house but most times we’d drive around nearby towns and Mom and Dad would look at houses to get ideas for their own.

I think it was during the course of these drives that I learned the art of zoning out. They were kind of boring and if I livened things up by torturing my younger siblings, my ice cream treat would be in jeopardy.

So I looked out the window and daydreamed. I’ve long-since perfected the zone-out of course. For decades now, I’ve been able to look teachers, bosses and Significant Others in the eye, nod and/or murmur appropriately, and have no idea what they just said.

Anyway, the lads were a tad less than thrilled at the prospect of an aimless drive so I came up with a purpose.

"We’ll check out some of my old favourite trout fishing spots and I’ll buy you guys an ice cream at this ancient general store I know."

If they cheered, it wasn’t audible over the radio.

Despite a few wrong turns and a couple of dead ends, we ended up having a nice time. We bought some corn from a roadside stand. It was one of those we-trust-you stands. The farmer wasn’t around. You take the produce you want and put the payment in a box.

That "ancient general store" had been modernized. The floors were no longer wooden and racks of videos had replaced the hardware and clothing sections I remembered. And there was precious little change from a 10-dollar bill after the cost of three ice creams was deducted.

The creeks and ponds were pretty much the same though, thank goodness. Although I didn’t bring any fishing gear, it was just nice to hear the rapids and watch the water. I wondered how so many years could have slipped by since I last fished them.

I’ll wrap this up with a few pictures.

One of our wrong turns brought us to a pretty swamp and I herded the lads out of the car to snap a pic. 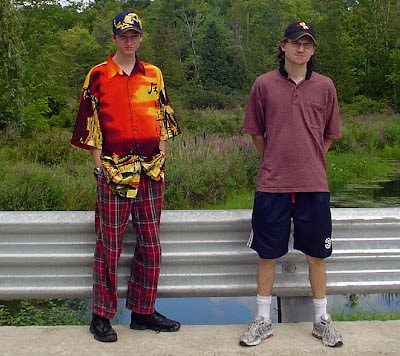 I dress them differently so I can tell them apart. 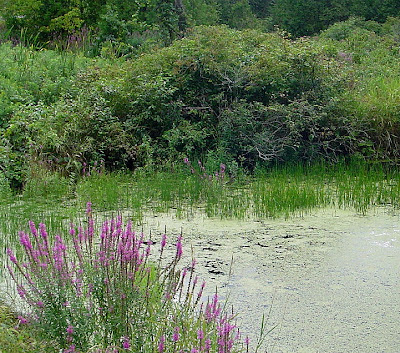 Told you it was a pretty swamp. 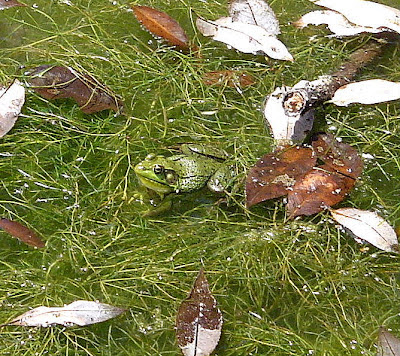 Mr. Bullfrog is nicely camouflaged by the surrounding weeds. 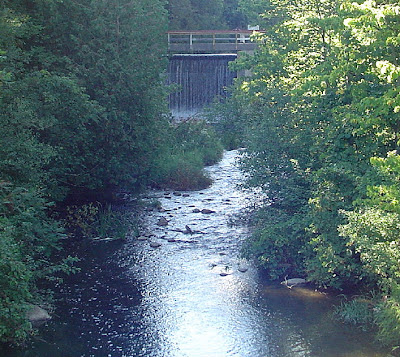 About 30 years ago I lost a brown trout below that dam that was near as long as my arm. Only The Great Angler knows how big he'd be now! 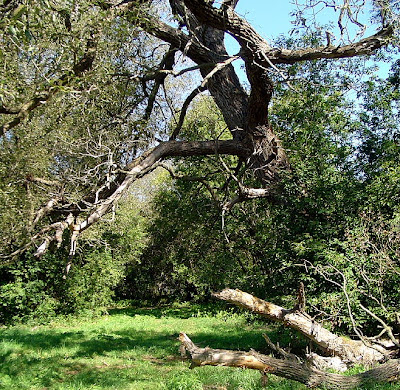 This hoary old tree seems to be blindly reaching out for the part of him he'd lost.

After we got home I clapped both lads on the shoulder and said I bet they couldn't wait until we repeated this adventure. They smiled and nodded in a suspiciously vague manner.

Could be there's a genetic component to the zoning-out thing.

I don't know about the zoning out part being genetic... but those pajamas.. oh my! He's his father's son, alright!

Nice story. It triggered some of my own memories of drives and ice cream and revisiting old haunts. Nice pics too.. love that tree. :)

Good nostalgic brain fodder, Frank. Good looking young men you have there, too.

Those beautiful purple flowers looks suspiciously like purple loosestrife, a highly invasive plant on the Illinois' list of noxious weeds. Illegal to grow or sell. They take over. But they are beautiful. Maybe they are native to Ontario.

Thanks Hilary. Jake thanks you too. ;)

Thanks Lori. They BOTH thank you too. :)

Anon, you're absolutely right - that's loosestrife. It's not regarded highly here either. I'm actually seeing less of it these days though. I think those loosestrife-eating beetles are starting to have an effect.

I always enjoy the musings! and the best advice i can give anybody is to perfect the zoning out thing. It comes in handy so very often.

I dunno where he gets his fashion sense Unique. Honest.

I have to give it to you straight. The lads look peeved. If you had all been on a pirate ship the word that comes to mind is MUTINY.

A few months ago I went to the local baseball stadium expecting that the cheap seats would be under $10. However, I discovered that the least expensive were $20 each and the parking was $10 extra and I did not like either team (the local Florida Marlins are awful, and they were playing another awful team).

So my child's first baseball game experience was postponed and we had one of those rambling drives to various stores and fast food and ice cream. Improvisation is the soul of wit.

Spidey, that's their normal look when I tell them to hug each other for the camera.

I bet your son enjoyed that rambling drive as much or more as he would have the game. All pro sports are getting ridiculous now, price-wise.

Doesn't always take a lot of money to find a way to enjoy spending time together as a family. Unfortunately, you might have used $55 worth of fuel on your little drive, though?

Anyway, your boys will probably cherish this memory as they get older - even though they might not fully appreciate it now.

Not quite that much Darrell - maybe $25. And I think you're right. It's not always the Ultra-Special Glamorous days that stick in the memory banks.

Love the pictures. And it sounds like a great day. Who needs a zoo when you got a swamp? I bet it's a day that they'll remember.

My parents could always buy us off from any thwarted adventure by buying us burgers. Something about going to a diner and getting to have a cheeseburger, fries, and a coke could totally make our day. That was back before there was a fast food joint on every corner though. Wouldn't work now!